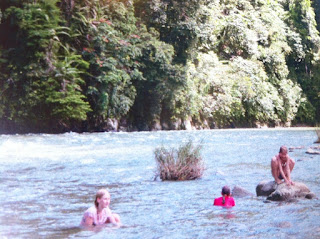 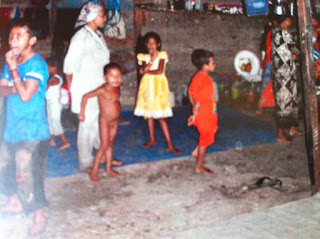 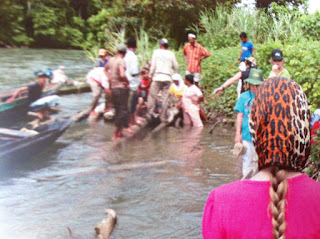 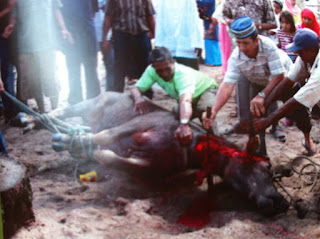 Three years ago we decided we would traipse off with our little family of six to visit my mother. Mother lives in Aceh, North Sumatra in Air Dingin, a small village on the coast. Air Dingin means cold water, and is given this name because of the beautiful waterfall which cascades toward the beach. My mother's built a semi-traditional style wooden house set against the jungle and lives with a local girl, Faridah.
Young son and Russell were invited (being males) to witness the slaughter of a Buffalo for the ceremony celebrating Abraham's sacrifice of his son. The photo above was taken by Russell with young son looking on and just slightly pale. It took a while for the offering to expire, with much writhing on the ground and moaning. After a few weeks of living just such a relaxed village lifestyle, my mother decided she would take us 'upriver' to 'friends'.
With second daughter vomiting most of the jeep ride to the start of the river junction where the longboats left from, we were exhausted before the journey had even begun. Up river are a number of small villages dotted along the way and the one we were visiting was the very last one - a fact for which we were later very grateful. We waited several hours for our particular boats to come and young son got to hold a real machine gun or two. Police and soldiers still patrol Aceh even after the tsunami supposedly dispelled insurrection and martial law. The eight of us were finally divided between two boats. We jammed our knees up against the sides of the low wooden boat and hung on to the seats, our few possessions and our food supplies. The journey again took several hours before we reached our destination.
People greeted us as we pulled in to the river bank and a gaggle of children took us into the village and the chiefs house. The village consisted of about a dozen wooden huts scattered around a central open social area. One family had graciously vacated their hut for us to sleep in for the  nights we were there and that night we lay squashed against each other like sardines wrapped in our sarongs. After a night spent retiring early due to there being no electricity in this remote village we felt revived from the days long journey.
The next morning we were shown which section of the river we could go to to bath and which section we should go to to pooh. Poohing in the bushes was definitely not on - it was frowned upon - and that's why we were VERY grateful we were the last village upriver! Did I mention the river was also the water supply for drinking?
My husband, Russell, is a doctor and that news brought everybody who was in any way ill to our door the next morning. With limited supplies he quickly dispatched all the outpatients - they couldn't fit in the hut, so out they definitely were - and we were free to bath and explore in peace.
That night as we were retiring Russell asked me to go for a walk with him.
'What an odd time - you know it's dark outside, don't you honey?' I asked.
'Yes,yes but I just really need you to come for a walk with me', he replied.
Ok then - grabbing a torch we headed out the door and into the jungle.
"Where are we going?' I asked.
'Down to the river'  he said.
'Oh, I see, you have to pooh - can't it wait till the morning?'
'No definitely not!!'
We wound our way down to the river and I held the torch and his trousers while he immersed. As we were climbing back up the bank and into the jungle I heard a low grumbling sound.
"Did you hear that?' I asked.
"What?"
"That grumbly-growly sort of sound. Can you even find the way back? I can't see the path" I whispered.
"No, I didn't hear anything!" he whispered back, "But lets hurry" and he raced off ahead of me with the torch and I was hot on his heels to avoid being left in the pitch dark.
The next morning when we  recounted the nocturnal expedition to Faridah in my halting Indonesian with the villagers,  there was a flurry of excitement and wide eyes. Apparently it was the tiger whose territory encompassed the village that I'd heard giving the low growl!
What do the villagers do if they see the tiger?we asked. Oh, they just run into their huts and lock the doors until it passes, came the nonchalant reply-  but, we were admonished, they NEVER go down to the river at night!

Email ThisBlogThis!Share to TwitterShare to FacebookShare to Pinterest
Labels: buffalo sacrifice, dorit d'Scarlett, pooh in the river, tiger, tiger in the night