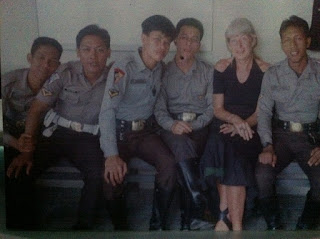 As mother is visiting with us at the moment and recounting some of her wild stories I feel inclined to share some of them with you. As I mentioned in a previous post mother lives for most of the year up in Aceh. She is an internationally exhibited artist representing Indonesia, painting under the 'nom de brush' Nurlisa. (Click on the link to see her paintings) Her promotion of Indonesia has earned her a documentary by National Indonesian television about her life up there.
Anyways, whenever mother returns in to Aceh it is standard procedure to report to the police station governing her district. On one particular occasion, back in the early days she reported in to the police station at Taratung, where by the way they happen to have the worlds best pineapples. They also happen to have a hospital where all the hospital waste flows directly into the river so if you ever go there remember not to swim in the river! That's her above.
As this particular town is some distance from her abode she was staying the night and decided to walk to a bar which surprisingly played karaoke. It was mainly full of police and army guys (this was during the occupation of Aceh by the Indonesian army).
She got talking to a very nice detective and they decided to retire outside  for a quick one standing up but unfortunately, mother lamented, he was too short - the logistics were imposssible. Back inside she was summoned over to the table where the Provost sat. This is a term left over from the Dutch occupation meaning the person in charge of all the police and who keeps order in the police station. He looked like a Russian KGB agent - big, scarred and generally scary. When he proceeded to go up and sing karaoke songs to her, mother decided it was time to leave. Some of the nice police guys organised a soldier to escort her back to her hotel. As they reached the hotel he asked
"Could I possibly come up to your room?"
"No" mother replied "You cannot possibly come up to my room!"
Later in her upstairs room she heard someone calling her name and banging on doors. Eventually the mysterious name-caller reached her door and she thought 'well the only way I'm going to find out who it is is to open the door' - it was the Provost! She went out to talk to him and he slipped into her room. How was she going to get him out of her room?  She ran down stairs to call the police but then realised he was head of the police! As she was running back up the staircase he was  down the other staircase at the end of the hall looking for her. She dashed into her room and locked the door. When he finally came back to her door he started crying and saying he loved her (men - after two micro seconds!) and he couldn't go home to his wife until six in the morning. When she didn't reply he started yelling all these words at her that she didn't recognise, so as he's yelling at her she's sitting on the bed looking them up in her dictionary and thinking 'What? He just called me THAT! well I'm definitely not letting him in now!' Eventually he went away and funnily enough she never did have to report in to that police station again. 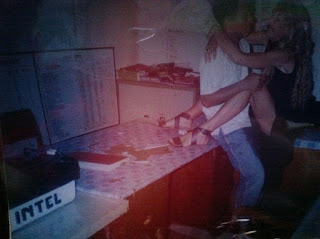