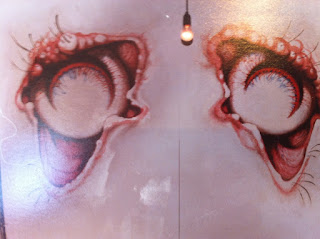 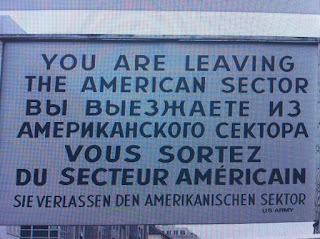 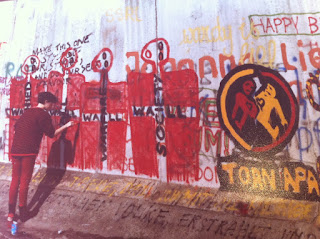 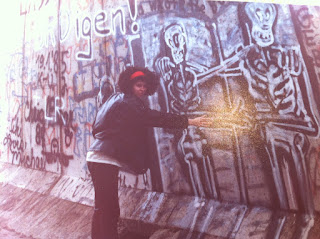 As a young punk rocker who didn't give a shit about what anyone else thought (yes that is me with the black dyed hair and Doc Martins) I hit the Berlin Art Scene with a vengance. My Omi lived in Berlin and my aunt, Tante Gisela, lived on the other side of The Wall in what was then East Germany (DDR). West Berlin was an modern art lovers paradise with lots of raw paintings being exhibited in seemingly every nook and crany. The eyeball painting above is from a college exhibition of artworks commenting on supression and torture by the Stasi (East German secret police) across The Wall. Note the deliberate installation of a bare light bulb.
Besides the progressive art scene, Berlin was also the go-to point for any alternative music live bands. We saw Killing Joke live as well as many German bands that were outrageously avant garde and good.
I visited the famous Checkpoint Charlie where diplomats could drive through to East side and the small museum dedicated to the hundreds of people who had tried to escape across The Wall since it's completion. My dad and Omi had themselves fled to West Berlin in  1958 when it became obvious that Berlin would be sectioned off. They had tried to persuade my aunt to go with them but she had a respected job, home and husband in the eastern sector and didn't want to leave all that behind. I think at times she may have regretted it, especially when supplies ran short of essentials, like toilet paper which we were always schlepping across with us whenever we went to visit.
I went to visit my aunt for a week, schlepping the mandatory rolls of loo paper, oranges which they hadn't had in centuries, and various other goods like non-East German money use to make purchases on the black market. Entering was no problem, they were happy to have anyone as long as you don't belong to a long list that includes fascists, radicals, terrorists, authors or other such dangerous people. However, when I came to leave - well I had black hair didn't I and my passport said I was blonde! After holding up the line with intense scrutiny and questioning at the booth, two stern and matronly looking Brunhildes in standard issues East German army green uniform came and escorted me away. Into an interrogation room I went - it was actually marked with those words - and I was strip search and questioned for an hour. When I finally gave in and began to cry, wondering whether I should just admit to really being an East German citizen trying to escape, one of the Brunhildes grabbed my hair, examined the roots and exclaimed -
'It's dyed! Ok you are who you say you are but next time come into the DDR with your real hair - DO YOU UNDERSTAND ME? You have caused us a lot of trouble!'
I was then allowed to take my fake hair across the border and back into West Berlin where more mischief awaited me.
One day shortly after this incident, my partner in crime and I decided that we would go and graffiti the Berlin Wall - that's what I'm doing in the photos above. Police would regularly patrol the wall, technically it was illegal, but if they didn't see you .... We cased out the particular section of wall we had in mind for several days to learn the routine patrol times and we timed our defacing accordingly. Armed with tins of paint and brushes we set about creating our controversial statements of art. We were no sooner finished than a patrol car came prowling around the corner - we'd taken longer than we realised. We ditched the evidence and ran for the nearest lane, sirens following us, and fell into the first available cafe.
The bartender, whose name was probably Kurt the kruncher and  built like a brick shithouse as my dad would say, took one look us and said (in German): "Looks like you two have been up to no good! Better have a coffee then!" and gave us two cups of strong black coffee with a smirk.
I explained to him in my best German that we had been 'decorating' the wall and he replied in English (don't you hate that) "Ve are not having too many tourists doing zis naughty business, normally just ze jung idioten from around here," and gestured to several other occupants of the cafe.