Bats - a Matter of National Security

What’s your favourite animal? (Leave me a comment in the comment box at the end of this blog) Mine is the Bat! In China and Japan, bats are symbols of happiness. In Chinese, the words for “bat” and “good fortune” are both pronounced “fu.” I just love bats, all bats but in particular the Spectacled Fruit Bat (Pteropus conspicillatus) which is lucky because my house in Far North Queensland is in the direct twilight flight path for the colony that by day hangs out in the giant fig tree outside the city library. (Groups of animals usually have special, rather bizarre names - a group of bats is called a “colony”, a group of crows is called a “murder” and a group of giraffes is called a “tower.”)
There are two types of bats, microbats and megabats, of which the spectacled fruit bat is a member. Megabats are believed to be more closely related to primates (that’s us, monkeys and apes) than they are to other microbats! Megabats have better developed brains than microbats and rely more on their sense of sight and smell than on echolocation like the microbats do. In fact, on moonless nights fruit bats cannot fly and stay hungry. A roosting megabat will bend its neck toward its chest and look at the world upside down. A roosting microbat will bend its neck toward its back and look at the world right-side up. What’s really interesting about the spectacled fruit bat is that, unlike other bats, they have both rod AND cone photoreceptors - the cones are for daylight vision and colour vision! Most bats have only the more sensitive rods –the photoreceptors in the eye that is used for night vision. The flying fox species have two spectral cone types, blue cones that detect short-wave light, and green cones that detect middle-to-long-wave light. With these two cone types, flying foxes have dichromatic colour vision – they don’t have red cones like we do for our trichromatic vision, but it does mean that they are certainly not 'blind as a bat'! Bats have excellent hearing and can hear frequencies between 20 Hz and 120,000 Hz. Humans hear between 20 Hz and 20,000 Hz. Dogs hear between 40 Hz and 60,000 Hz. Bats that feed on frogs can tell the difference between safe and poisonous frogs by listening to the male frog’s call.
Flying foxes often hang out in exposed treetops during the day where they have a clear line of sight with their cone photoreceptors to any potential predators like birds of prey. Spectacled flying foxes have one pup annually. They pretty much have sex continuously from about January to June. Conception occurs in April to May and they give birth after 6 months in October to December. The young are are nursed for over five months, and once weaned they congregate in nursery trees in the colony. These little cuties fly out for increasing distances with the colony at night and are 'parked' in nursery trees, often kilometres distant from the colony, and are brought back to the colony in the morning. I first became enamoured of bats after reading Bram Stoker’s 1897 Dracula when I was 14 (not that I was 14 in 1897!). Stoker combined the discovery of vampire (“blood drunkenness”) bats in the New World with Vlad the Impaler (1431-1476) stories, to create Count Dracula. (Dracula, by the way, has never been out of print). People have been fascinated with the mystique and horror of vampire bats ever since. In the 1941 movie The Devil Bat, that actor we love for his Nosferatu character, Bela Lugosi, plays Dr Carruthers, a mad scientist with an even madder killer bat! Lugosi is out for revenge against the men he believes swindled him out of a cosmetics fortune. By applying electric current, he makes bats grow to the size of a ferocious wolf. He discovers that if he adds a rare Tibetan herb to his latest after-shave lotion formula it turns the bats into vicious killers. Vampire bats do not actually “suck” blood. Instead, they typically “lap” up two teaspoons of blood a night with their tongues. The blood moves through the bat’s mouth in two channels under its tongue. Only the red blood cells are used and within two minutes of starting to eat, the bat’s body rids itself of blood plasma in the form of urine. Some white-winged vampire bats snuggle up to hens and pretend to be chicks. Once in position under the hens, the bats feed on their blood – sneaky!

It is very rare that a vampire bat will bite a human, but if it does chances are it will likely come back the next night to feed again from that same person. How does it find the right person? Vampire bats can tell people apart by the way they breathe. A vampire bat that has found a meal may sometimes share the blood with other hungry vampires at the vampire roost. The vampire that found the blood vomits it to feed its friends. As a useful aside, scientists have been able to use the anticoagulation agent in vampire bat spit to treat human stroke victims and human heart patient victims.

In Far North Queensland there is always talk of culling the bats because they destroy farmers crops or spread the Hendra virus to horses but seriously, if you touch my darling little sweetheart bats then you endanger the region. Biologists and ecologists describe the bat as a linchpin of ecosystems. Why? Because the bat is a natural pest control agent and crucial pollinator. Bats eat literally tons of insects every night. Some seeds will not sprout unless they have passed through the digestive tracts of a bat. Bats spread millions of seeds every year from the ripe fruit they eat. Approximately 95% of the reforestation of the tropical rainforest is a result of seed dispersal from bats. Some people don’t like the bat droppings. Whenever we go into our pool shop to have our pool water tested and the levels are out, we will invariably be told ‘Probably bat droppings upsetting the pH levels’. However bat poo is an excellent source of fertiliser with a high nitrogen and phosphate content. In fact, during the U.S. civil war, bat poo was used to make gunpowder, so it could actually be in the interests of national security to maintain our bat populations! Actually I popped down to the RSL (Returned Servicemens League) club today and found this mascot up on their wall! 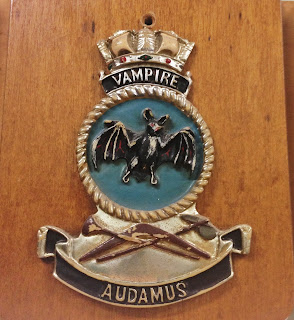 Fruit bats are a traditional food source for the Chamorro tribe of Guam, eaten with such relish as to put the poor bat on the endangered list. Served at weddings, fiestas, birthdays, and alike, the etiquette of bat-eating and preparation involves rinsing off the outside of the animal like you would a cucumber and tossing it in boiling water. The animals are then served whole in coconut milk and are consumed in their entirety. Meat, internal organs, fur, eyes, and wing membranes are all eaten. In revenge the Chamorro are quite likely to develop dementia and a rare neurological disorder, amyotrophic lateral sclerosis-Parkinsonian dementia complex (ALS-PDC), or "lytico-bodig", due to the toxic effects of the cycad plant which the bats like to eat, the toxins of which are stored in the bats fat and when consumed by humans is toxic to them.