If we are completely honest with ourselves we would admit that we are all of us addicted to something to a a greater or lesser extent. When I was I was a child I was (and still am) addicted to marzipan. The mere mention of marzipan makes me salivate, tingly sensations run through me and every good feeling associated with eating marzipan is resurrected. Usually marzipan was a treat reserved for Christmas Eve - the Danish Jule Aften - along with the occasional Princess cake(a Swedish cake covered in green coloured marzipan) served with afternoon coffee at the Kristensens house, Swedish friends of the family. 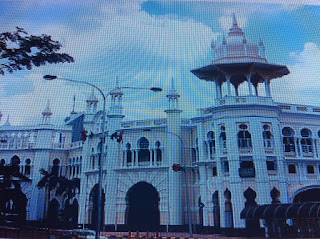 On trips to visit the grandparents in Copenhagen and Berlin I would often be given my own special stash of marzipan. On one such journey I stuffed a one kilo block of the heavenly manna into my satchel to take back to Australia. My mother and I were travelling home via Malaysia and we had some days in Kuala Lumpur. We stayed at the iconic old Railway Station hotel with its old fashioned key locks and languidly rotating ceiling fans. We were brought coffee served in a teapot when we arrived and mother being a coffee addict took her first mouthful.
"Mum, don't smile" I said - her teeth were black!
Later mother went down to the bar and I lay on the bed listening to my new walkman (I was 14) and promptly fell asleep, only I had locked the door and couldn't hear mother banging when she later returned. She had to get reception to summon up a handyman to break in.
Waking on the second morning I spied a hole the size of  a golf ball chewed into the back of my satchel. What the hell! I opened the satchel and something had eaten some of MY marzipan.
"Mum! Mum quick! something horribly awfully terrible has happened. MUM!" I called out.
Mother came sauntering in.
"Somethings eaten my marzipan!"
Hmmm. Later that night as we lay in our beds writing in our journals a sudden movement caught my peripheral vision. A bloody rat the size of a house cat crept along the far wall toward my satchel! The hour of the Rat had arrived.
"Mum look, it's the bloody marzipan stealing rat. Quick, get rid of it!"
Mother tossed a well aimed shoe at the treacherous rat, but rat was quicker. Mother leapt off the bed and pursued rat but alas rat escaped into a rat hole in the bathroom.
Mother offered to get the hotel people to set a trap or put down poison but she so vividly described the agony and rat squealings that would accompany either of these alternatives that we decided that rat could have its hour. The satchel was strung up from the ceiling fan to prevent further marzipan stealing in the night.
Now what made me think of this was the A5M(Antiageing Medicine) conference I attended with Russell on the weekend. One of the lecturers was recounting a scientific experiment that had been conducted in which the researchers had gotten rats addicted to cocaine. They then tried every type of drug, remedy and conceivable alternative to get the rats off the cocaine but to no avail, except when they gave them high fructose corn syrup - then the rats actually preferred this to the cocaine! Do you realise how many foods and drinks high fructose corn syrup is in? It's the new cocaine - how's your addiction going?
Posted by Unknown at 19:27