False Vampires – Bats and Doctors: The Dirt on The Isa


Mission – two weeks in the outback at Mt Isa hospital E.D.; side-kick – moi; code names Doc and The Mrs. Modus operandi, go incognito: Doc - jeans and check shirts –check; moi- I think I  got away with the usual – red lipstick – well, it’s kind of camouflage, there’s a lot of red dust here I’ll have you know, therefore I’ll give that a check! We flew over the mine site, a massive 5km sprawl with a huge open cut scarring the surface and landed in what locals affectionately call The Isa. Red dust, spinifex, tin roofs of mineside and townside homes, separated by the Leichhardt River, the giant lead chimney stack and the smaller red and white stripped copper stack that constantly spews forth sulphur dioxide gas dominate the town from any aspect. Fork-tailed kites soar the thermals and at night ghost gums are silhouetted in the moonlight. 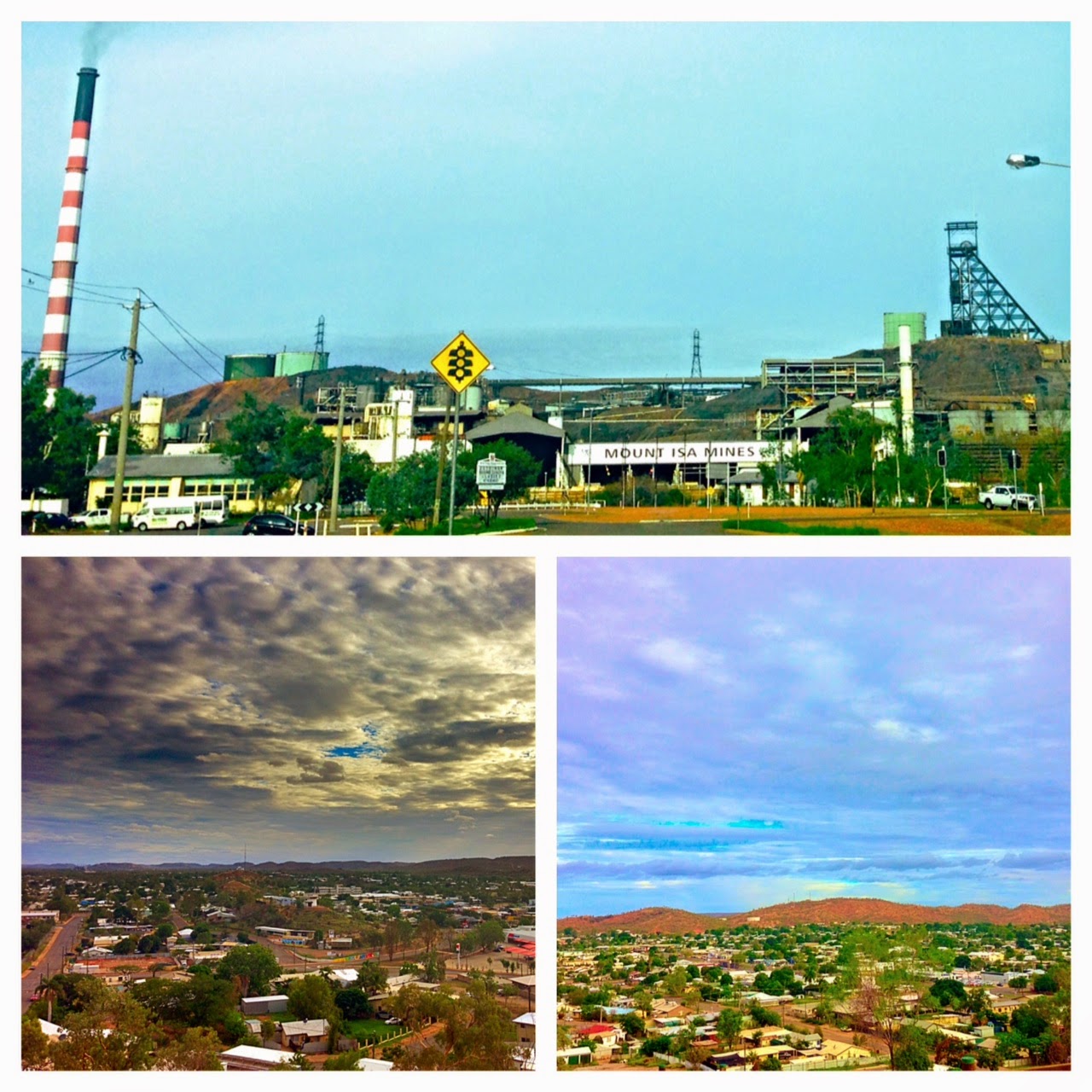 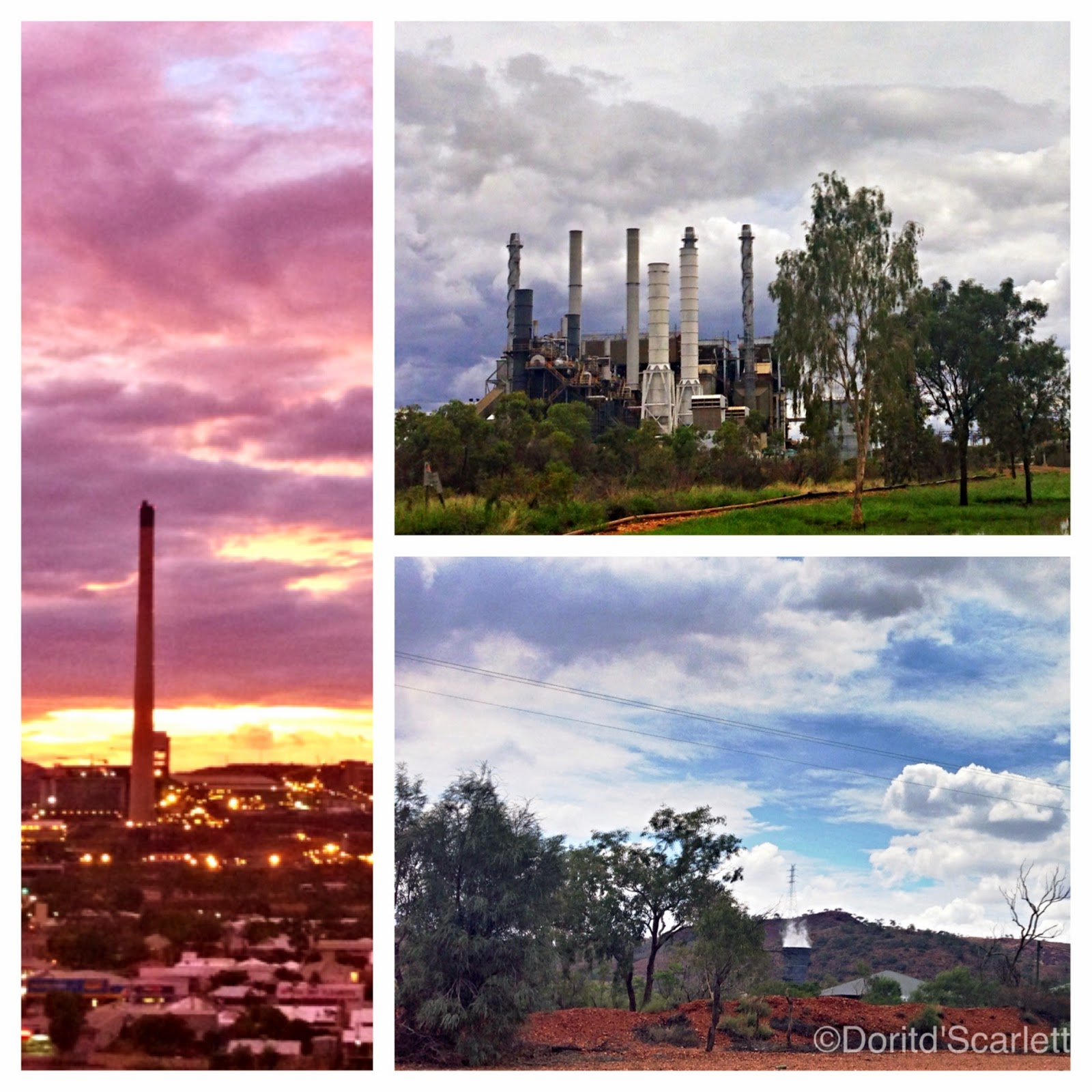 It happened to be raining as we drove to our mineside house the hospital had given us at Soldiers Hill and after a three year drought, nek minnit, the river was flooded and all but one of the roads crossing into town and the hospital were impassable. Bloody big road trains with not just two, not three, but FOUR trailers thundered past us carrying goods to and from the coast. At the house they had thoughtfully supplied us with fresh ground coffee but nothing to make it in. Luckily I had brought our trusty Vietnamese coffee filters - #1 travel tip, always travel with trusty Vietnamese coffee filters! 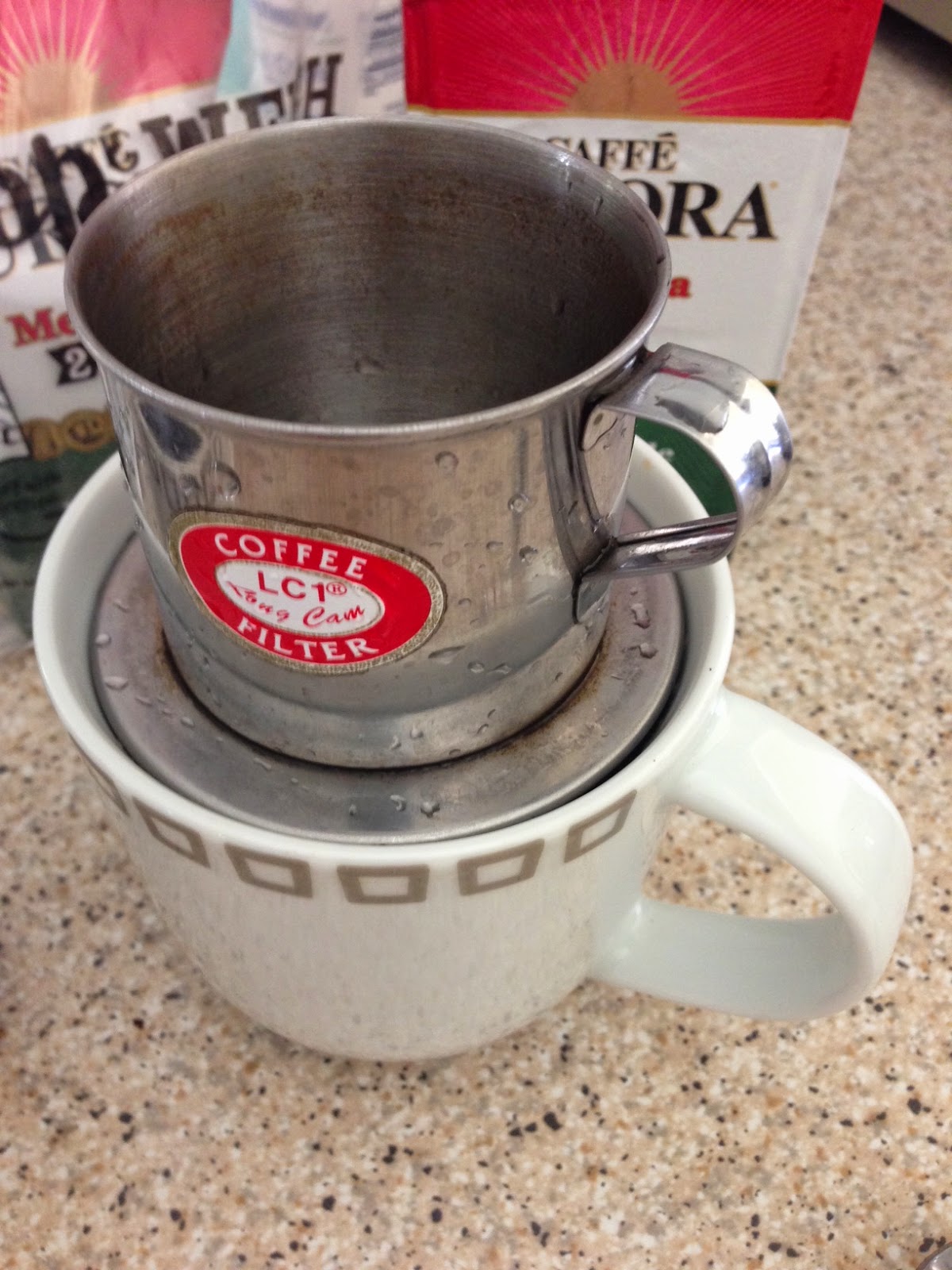 Overnight everything around us turned green. That wasn’t the only thing that was green. It turned out The Isa was a perfect location for viewing the comet Lovejoy as it continued on its trajectory north between Andromeda and Perseus. Well it would have to be wouldn’t it, being in the MFN (middle of f*cking nowhere) and therefore having minimal light pollution. Occy captured the comet with his camera. 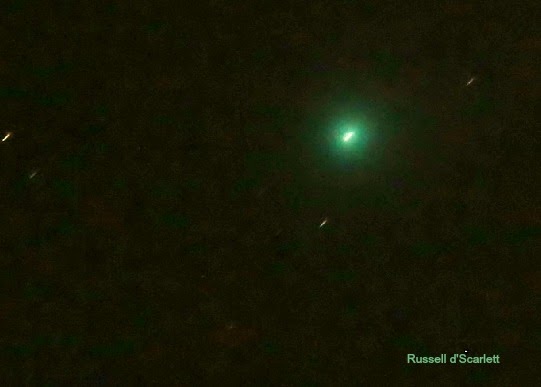 The comet was discovered last August (2014) by Australian amateur astronomer Terry Lovejoy – actually it’s his fifth discovery so total brownie points to him. Oh, and did I mention it’s green?  The green glow comes from molecules of diatomic carbon (C2) fluorescing in ultraviolet sunlight in the near-vacuum of space. (Cyanogen (CN) can add some violet to the green, but our eyes are fairly insensitive to violet light, which is a shame because it makes it sound really exotic.) The gaseous tail of the comet points directly away from the Sun and is tinted blue from fluorescing carbon monoxide ions (CO+) but unfortunately we couldn’t see that either which is a total poo!
Occy went off to work the next day and we regrouped in the evening for a debriefing at ‘the Local’, the Barkly hotel, where they did a very decent roast of the day for ten bucks. It was roast pork and veg. In fact it turns out it was roast pork and veg every day. Occy asked for the crackling and the cooky-boy said, ‘Sure, if the staff hasn’t eaten it all.’
I thought to complete our incognito cover we should order beers, you know, when in Rome and all that. I think I might have blown our cover though when Occy asked me at the bar which one I’d like and I said, ‘Oooo, I’ll have the one with the cute Tasmanian Devil on it?’ The barman asked me, ‘Would you like a pint or a schooner, luv?’ Schooner? I thought that was a ship!  ‘Just a glass is fine,’ I replied.

‘Well,’ I asked Occy over a mouthful of pork, ‘how was the first day?’
He squirmed a bit in his seat and said ‘I felt like Frank Abernathy in ‘Catch me if you can’ playing Dr Conners.’
‘Really?’ I asked, ‘Why on earth was that?’
‘Well, you know how we thought there were only three doctors here? Well there are only three senior doctors here, and there’s a whole load of younger doctors – PHOs, registrars, interns and medical students.’
‘Oh and what’s wrong with that?’
‘Well I’m one of the three senior doctors and I’ve got this whole team of doctors (this said with an almost horrified look on his face) that have to report their cases to me and check that they’re doing the correct treatments and so on so I really had to step up and look like I knew what I was doing, which I did, it was fine, but I almost felt like asking them ‘So do you concur?’’
I just laughed my head off! Yes, it’s a bit different to being the sole doctor in the ED department of Manji, but to his credit it only took a few days for him to slip quite comfortably into his new role and realise that he did actually have quite a lot of experience and knowledge. 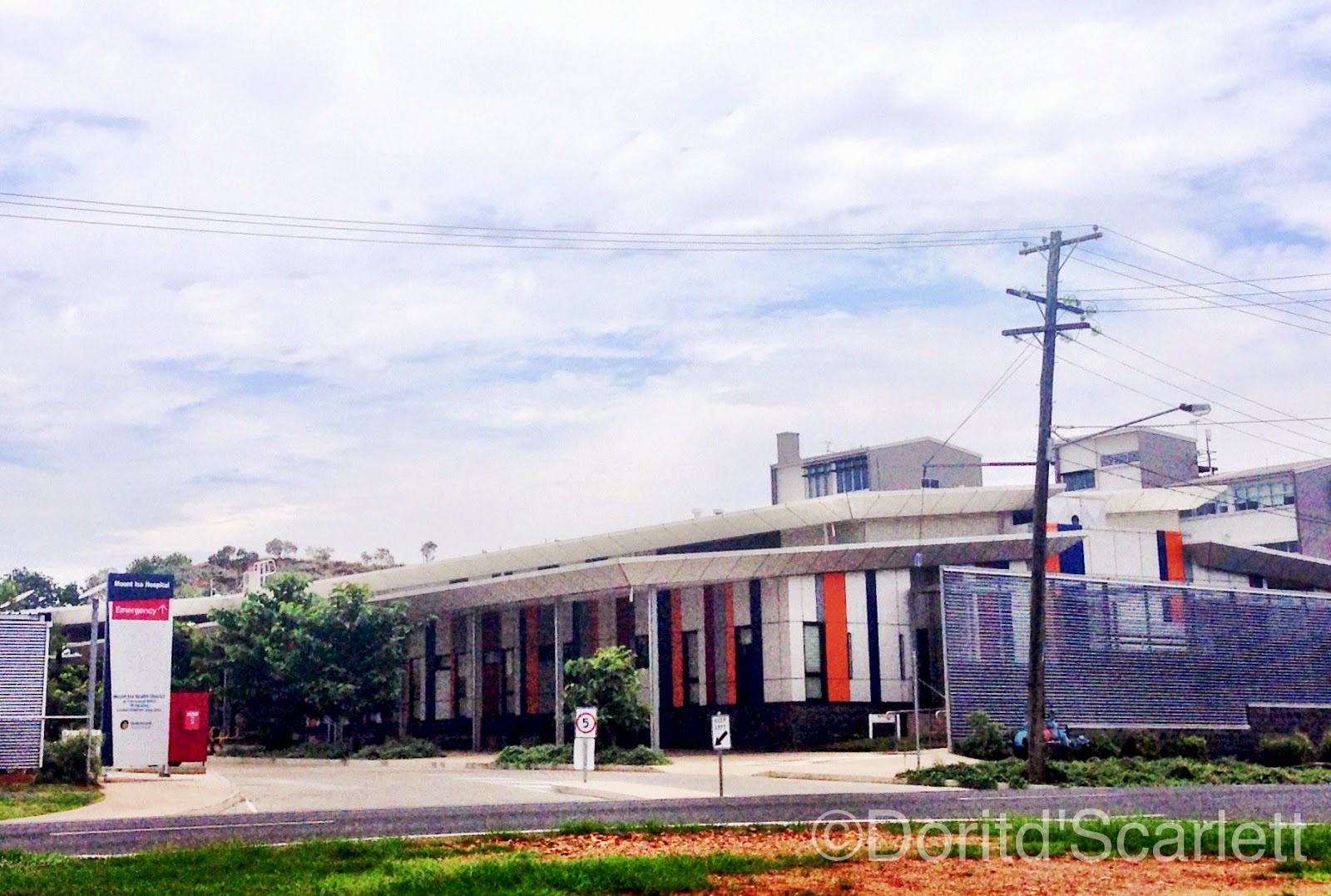 At the back of the hospital we discovered Australia’s only Underground Hospital. The first hospital in Mount Isa had been nothing more than a row of tents operated by the mining company. In fact most of the early houses in the Isa were tent houses and apparently they were far better that the tin roofed houses that followed them because at least you could water the canvas down and the tent would be cooled by evaporation.

Mount Isa Mines eventually opened a 40 bed Community Hospital mineside in 1929 and that was latter replaced with the current state hospital townside.

All very nice you might say. Well it was particularly nice of Kabalulumana because he could have quite righteously ignored old Milesy after what the whites had done to his people back in 1883. You see all of this land belonged to the Kalkadoons but of course that wasn’t acknowledged back then, or today really. So as it transpires there was this new hotshot Sub-Inspector of Native Police that had been appointed in nearby Cloncurry; twenty-five year old Frederick Charles Urquhart. The power obviously went to the little shit’s head because the first thing he did was round up all the scattered horses in the area and buy or commandeer (read steal) more. He drilled the Native Police troopers ‘with all the vehemence of a Prussian Sergeant-Major’, moving their camp twenty-five miles out of town to maintain discipline.  The Kalkadoon leader Mahoni made the mistake of challenging him to come out into the hills, saying they would finish him off. Urquhart wasn’t going to let his ultimate authorita be questioned and was obviously just waiting for an excuse to get down and nasty, because when James Powell, was speared to death while mustering cattle on his station, co-owner Alexander Kennedy joined forces with Urquhart and trapped the  Kalkadoon war party who had gotten wind of Urquharts intentions in a gorge. The Kalkadoons fought hard but seriously, when you’re facing a carbine and all you've got is your best boomerang and spear, you really don’t have a hope in hell do you? One eyewitness said that ‘men, women and children were killed, but mainly men’.
The event which led to the final battle of the Kalkadoons was the murder of a Chinese shepherd on the Granada Station. Worried about his stock, the station's owner, Hopkins, gathered a large body of men to augment Urquhart's Native Police. Pastoralists and farmhands came from all over the surrounding area to take part in the in what became known as the Battle Mountain massacre. Observing this large body of whites gathering, messages quickly went through the Kalkadoon network for the warriors to assemble.
Urquhart tracked the Kalkadoons, now 600 strong and led by a man wearing a headdress of white down, and a ‘thick possum-string hanging around his neck and attached to another string passing around his waist’ to a spot atop a boulder-studded hill. It was an excellent tactical manoeuvre, overlooking the plain below and the Kalkadoons had laid in large stocks of spears and boomerangs for just such a siege.
Sub-Inspector Urquhart started the battle in typical ‘the sun never sets on the British Empire’ fashion by ordering the assembled warriors to ‘Stand in the Queen's name’. The Kalkadoons, who probably didn’t give a hoot about the lady in the funny headdress, replied with a hail of rocks and missiles and a ‘roar of defiance’.
Urquhart then ordered the now famous cavalry charge that finally led to the deaths of 200 of the finest Kalkadoon warriors. Not happy with the slaughter - well they didn't get all 600 did they! - Urquhart and his troopers, who would have been right at home with the KKK, continued their ‘cleaning up’ operations for several days.
Even in 1960 it was noted that ‘for decades, the hill was littered with the bleached bones of
warriors, gins and piccaninnies’.  An anthropologist in 1890  said of the Kalkadoons in the area ‘I saw men and women, their faces sunken in, their bodies so shrunken, and eyes so small and far back in their heads that at first sight they appeared like mummies of centuries
gone by walking about the camps.... Lake Nash has some bad cases and white travellers do their very best to disease the black gins. I saw one poor child not 12 years that had syphilis for 12 months or more, can anything be more horrible than this, it is bad enough to know how they have been shot down without allowing these things to continue'.
But things did continue like this for a long time, look at this excerpt by the American birth control campaigner Margaret Sanger who quite casually wrote in her papers What Every Girl Should Know (1920): "The aboriginal Australian, the lowest known species of the human family, just a step higher than the chimpanzee in brain development, has so little sexual control that police authority alone prevents him from obtaining sexual satisfaction on the streets".

So, what did I learn from this jaunt to 'The Isa"?