Counting Your Fingers in Dreams 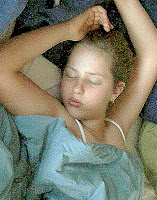 So what about people who are born totally blind or who lost all of their sight very early in childhood? These people usually have little or no visual imagery, but show the same detailed attention to sound, smell, touch, and taste in their dreams as they do in waking life. There is a very close relationship between vision and touch, both of which rely on edges, junctures, and contours to make discriminations and develop an overall conception of an object.
In a series of interviews conducted at the University of California by C. Hall in 1948 with an 18-year-old blind student about her sense of objects in her dreams she recounts how she was sitting around a table with her family in a very nice restaurant, she reported that "I knew we were at a table by kinaesthetic sense and knew it was a nice place by auditory sense (thick carpets, quiet atmosphere, etc.)." Then she went on to explain: "I have a picture of a table because I know what a table felt like, not because I have seen one". In another dream she described a beautiful table with two big silver candelabras on it. When asked how she knew the candelabras were silver, she replied it was because they were "very smooth to touch."
So when you go to bed tonight make sure you’ve had a high protein dinner beforehand (and taken some digestive enzymes so can actually absorb it properly) and remind yourself to count your fingers in your dreams several times before going to sleep (one of the ‘lucid dreaming’ training techniques) and let me know what happens!
Posted by Unknown at 12:12