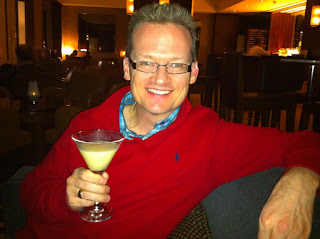 Today I attended a pre-conference workshop on alternative cancer therapies. I rendezvoused last night with Russell in Melbourne. He flew in from Western Australia and I flew the coup down from Cairns, leaving the kids and mother to their own devices. After Russell's favourite Beef massaman we ended up at The Emerald Peacock, a hip little bar with a bartender who fancied he was Tom Cruise in 'Cocktail'. He shook up a lethal combination for us. As we walked(?) back to our hotel the light display on a high rise building became unusually mesmerising.(see photo below) 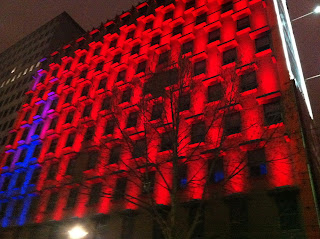 The fact that our hotel had a dedicated martini bar (Bond fans unite!) AND it served chocolate and turkish delight martinis seemed suddenly both inspired and prophetic!
Waking the next morning Russell suddenly seemed to be suffering from CRAFT syndrome - can't remember a f****** thing. I can't imagine why! Anyways, moving right along speaking of other types of poison, the days workshop passed in a slight haze, but what did stand out was the limited efficacy of chemotherapy on all but a few cancers (testicular, Hodgkins disease, non-Hodgkins lymphoma and to a much, much lesser degree - 8% - ovarian cancer). The speaker, Dr. Mark A. Rosenberg, (see Dr Rosenbergs review of his cancer protocol) interesting point was made repeatedly about the farcical suppression of these facts by major governing authorities like the FDA.
Posted by Unknown at 16:55