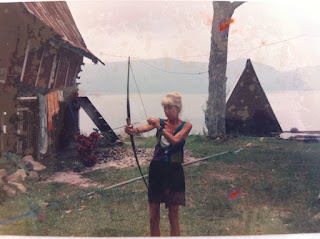 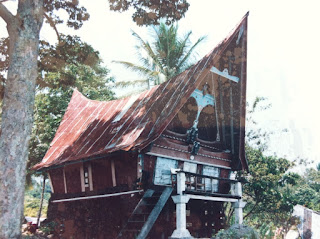 When I was 6 months pregnant with first daughter I travelled up to Lake Toba in central Sumatra. Lake Toba is an elevated lake which lies in the crater of an extinct volcano. A central 'plug' forms the small island of Samosir and it was on this island that my mother was living. Now you all have to get that Karen von Blixen has nothing on my mother! If it's normal, conventional or in any other way mediocre she's just not interested. My mother definitely does not do mediocre - how boring! That's her in the photo practising with her bow and arrow in front of her typical Batak style house. I think bat was on the menu that night.
At six months I was already akward and getting in and out of the house was a minor challenge.  Batak houses are built up on stilts and have a door  about 3ft high that requires one to crouch and climb through in a very clumsy manner. Of course there's a good reason for this. The Bataks used to be cannibals before they converted to Christianity and drank the blood of Christ instead. The low doors ensured that any enemy entering the house  hunting for their dinner could first be clobbered to death.
My mothers house was situated on the lake and washing - of bodies and clothes - was done in the lake. It was really a rather idyllic existence. On the second night of my visit I was woken from my sleep by an apparent earthquake. The entire wooden house was bumping and shaking. I knew that earthquakes were possible in the region but I hadn't really been expecting one and the frequent power outages meant that on that particular night we were in pitch black darkness with a new moon. I wondered that my mother could sleep through this!
'Mum!' I called out, 'Wake up - there's an earthquake!'
'It's ok Dorit,' came a calm reply back, ' It's only L____ come to visit, go back to sleep'.
The next day, after I'd adjusted to the fact that my mother had not just one but many native lovers, she suggested we visit her friends up on the hill who ran a local eat house. The friends turned out to be a charming couple, the wife devoted to her blind husband who was razor sharp and asked me many questions about my life. We were served a dish of  stew in a rich, thick, dark gravy.
'You must try this,' my mother enthused.'Its the local speciality - dog stew cooked in it's own blood. It's really delicious'.
'Mum do you really think I should be eating this when I'm six months pregnant?'
'Why not? They only use white dogs you know - they're cleaner' she stated quite matter of factly as though that should dispel any further resistance. Well I am my mothers daughter so of course I ate it and it was delicious. I didn't get sick and it was all good - well, sometimes first daughter IS a bit strange...