Midsummer Madness In The Arctic Circle 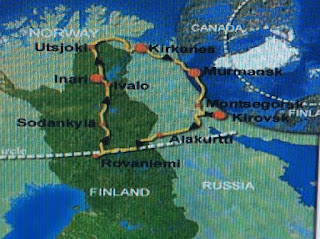 Remember the two mad Tango dancing Finns from our medieval wedding? Well I met them at the end of my Himalayan trek. We were stranded in Jomson together, bad weather kept us waiting for a prop engine plane to airlift us out of the range for three days. It was freezing up near the Tibetan plane but fortunately the one and only guesthouse had wooden tables suspended over sitting pits in which were placed bowls of hot coals to keep the feet warm. I met Ritva and Jouko over a game of cards and a few drinks and they invited my pothead friends and I to visit them in Helsinki should we ever venture that far north. In reality the likelihood of anyone  travelling to Finland is actually quite low, so you can imagine their surprise when I rang them from my grandmothers (mormor) in Copenhagen some months later and asked if it would be ok to come visit them on the next available ferry.
'Sure!' Ritva said as she was thinking 'Do I even remember this girl?'
'You can come with us to the Midsummers Film Festival in Sodankyla, up in the Artic circle'
As I stepped off the ferry which had carried me through the Swedish archipelago to Helsinki, wearing an orange parker (dammit they didn't have any red ones!) and nothing but a full body catsuit and red lipstick, Ritva and Jouko were there to greet me waving enthusiastically. 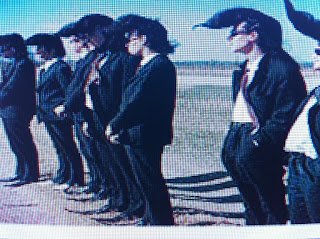 Jouko was a presenter for the Finnish satirical version of 60minutes and his trademark was sunglasses that he always wore whenever he presented a segment. Ritva was the band manager for the legendary  Leningrad Cowboys so I got to meet lots of interesting people. Ritva was also very aware of the interior architecture movement in Helsinki which was great because I was enrolling in Interior Architecture the following year at uni (a degree that would take me 10 years to finish because all these unexpected bloody children kept arriving on the scene!) 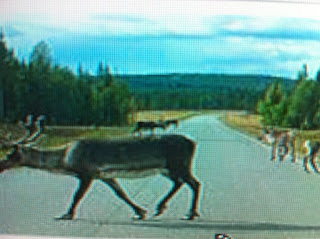 Later in the week we set off Sodankyla up in the arctic circle. Snow still dotted the ground even though it was midsummer. The Midsummer Film Festival is an annual five-day film festival in Sodankylä, Finland. The festival usually takes place in the second week of June. One of the main themes of the festival is to show films without a break all day and night long, while the sun keeps on shining.
The Midnight Sun Film Festival is non-competitive. The program consists mostly from the films of the main guests, 20–30 modern movies from all parts of the world, contemporary Finnish films and cinema classics, some of which are usually presented as "master classes" by various film theory experts. Typically the festival introduces 4–5 directors from the younger generation who are also guests at the festival.That year the well known Finnish director Aki Kaurismaki that my friend knew was there showing that years film, The Match Factory Girl. 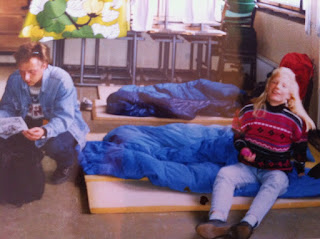 We arrived at the tiny airport and drove to the town, passing reindeer along the way (Santa lives here), eventually our destination of the local pub. The Finns are terrific drinkers, in fact its a national pastime that almost rivals the ferocity of the Vodka drinking Russians! Ritva and I were sequestered to a table whilst Jouko went in search of floorspace to sleep on. Three large, hairy locals came and plonked themselves down at our table and upon learning that I was from Australia and no, my multi-lingualism didn't unfortunately stretch to Finnish, proceeded to say the only thing they knew in english - 'Kanga-roo' accommpanied by little hopping actions and rolling around on the floor in fits of hysteria. Jouko finally came and rescued us and took us to the school hall (see photo above) where we could claim a piece of floor, and 'basin-wash' in the girls toilets.
The film festival was amazing and the most amazing thing was it never got dark so at three in the morning people would be wondering in and out of films and it would still be broad daylight. It was quite disorientating and by the end of the third day we didn't really know which part of the day or night we were in - it was like being down the rabbit hole.
Posted by Unknown at 09:14