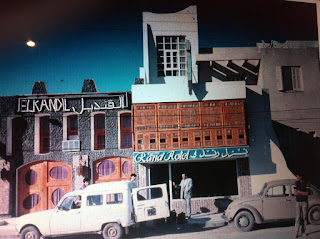 Back in '84 I travelled with my mother to Tunisia. We flew in from Germany to Sousse on the east coast. Mother managed to locate a hotel for $2/day. We weren't sure if it was the hotel we had booked and this required a French painter, a school teacher and eventually another gentleman, Toufik, to help with the translations.He was a Tunisian who had emigrated to Sicicly but had returned to help the widow of  the recently deceased hotel owner, who had died falling into the feature well he had been constructing in the hotel. Toufik took an instant fancy to mother and offered to drive us around all of Tunisia. 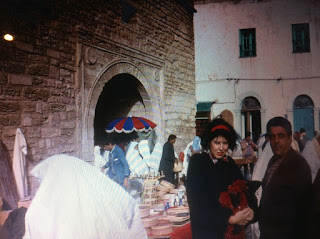 We drove south to Sfax and then into the Sahara to Gabes where we found Toufiks police friend we were to visit had thrown himself of a balcony. This required plan B which was to stay with Jewish friends of Toufiks. He was a marble millionaire and everything in the house was made of marble, even the toilet! We had couscous for dinner and mother proceded with her usual tact to tell the joke about a Jew and two Arabs on a cruise ship (Toufik was an arab).  This jewish guy, Mosha, has saved up for a meditteranean cruise and goes and sits in a deck chair and suddenly the sun is blocked by two Arabs who proceed to sit down on either side of him. One Arab says to Mosha
'Hey Jew boy, get me an orange juice and leave your left shoe here'
So he thinks, well you know we all have a right to be here and it's a wonderful cruise so he goes along with it and goes and gets the orange juice. When he comes back with the orange juice he puts his foot in the shoe and it is wet. Then after a while the other Arab nudges him and says
'Jew boy, get me an orange juice!' and Mosha says
'I suppose you want me to leave my right shoe here?'
'That's right' replies the second Arab.
Mosha goes and brings back an orange juice and putting his shoe back on finds that it too is wet. He sits down and after a little while when the Arabs have finished their orange juice he says
'Tut, tut, tut, isn't it terrible! Here we all are on this wonderful Meditteranean cruise and what happens? Arabs piss in Jews shoes and Jews piss in Arabs orange juice!'
There was dead silence at the dinner table. 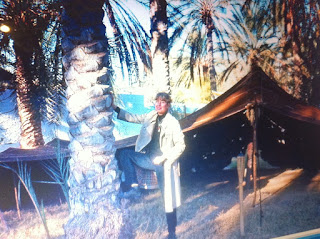 From there we sailed over to Gerba and went to a club med in the evening. It looked ike a mental assylum with everyone running around in  white versions of the local usually black kaftans.
We drove further south into the desert to Douz and the further south we got Toufik insisted we cover ourselves up completely so we wouldn't get 'stolen' for camels he said. Apparently we were worth a lot of camels. In Tozeur we went to the zoo and cuddled a lion. 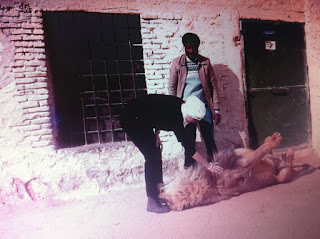 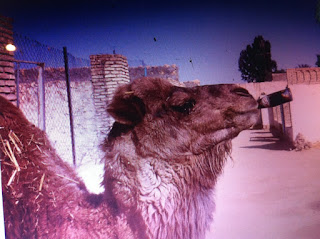 We stayed with a school teacher friend and slept in a traditional bed set into an alcoved wall that belonged to the mother (I think she ended up on the floor!)
Toufik then decided that I was lonely and he picked up a relative, a handsome young pharmacist who continued the journey with us. 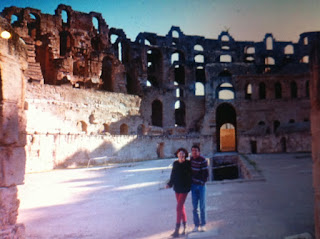 In Kairouan we discovered a ruined coloseum from the Carthagians.Whenever we saw yellow  headlights as we got further north towards Tabarka near the Libyan border Toufik would yell out
'Ah! Bloody Libyans' The Tusians had white headlights.

We finally made it up to Tunis (the capital) where we had to go for a 'promenade' every evening. On the final night mother and I found we were expect to return the favour of being taken around Tunisia, if you know what I mean. It was a completely ridiculous extract from Pink Panther, involving people (us) running between rooms,  erroneous phone calls, and an over eager virgin (not me - my escort!)