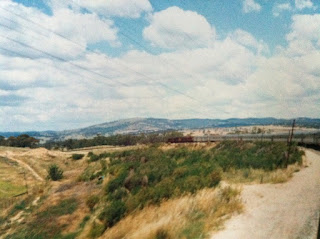 The year I first started going out with Russell we were both Uni students. We decided that at the end of the year we would take the train across the Nullabor desert from Perth on the west coast to Sydney on the east coast. My mother was living in Melbourne at the time with a mad Egyptian so we would also go down there to visit her. We deliberated over the best was to travel between Sydney and Melbourne and decided we would train down to Canberra then, taking our bikes on the train, we would bike from Canberra to Melbourne. 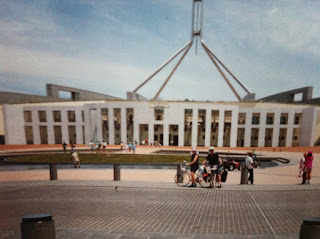 We bought a lightweight tent, organised saddle bags for our clothing and supplies, rigged up water bottles with long pieces of flexible plastic tubing we could suck on at any time ( now such a thing has been marketed and is called a Camelbak). On our first day we studied our map and determined our route out of Canberra. We would take a small road through the country to avoid the main highway and big trucks. We could see there were plenty of small towns along the way to pick up supplies. We rode as far as we could before dusk and then searching for somewhere to pitch our tent came to a small country church. There was not a soul around so we figured it was probably safe to camp in the church yard as it was midweek. We pitched our tent by torchlight, cooked some dinner over a fire and went to sleep. 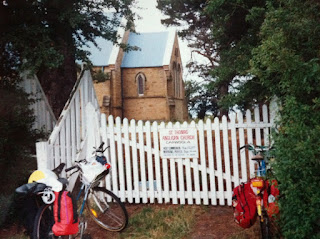 In the morning the churchyard was shrouded in mist. We washed from the tap in the yard - it was freezing cold - and decided to see what was on the other side of the hedge we'd pitched the tent next to. You can imagine our horror when we not only found a graveyard but TWO freshly dug graves next to each other! You've never seen two people pack up camp so fast.
Riding on up a mountain in the mist we soon noticed that we hadn't come across any of the towns marked on the map. We were getting quite hungry and had come to a vast expanse of pine forest. Luckily we spotted a ranger and showing him the map asked what had happened to all the towns.
'Oh no!' he exclaimed, 'They're not towns marked on the map, they're old homesteads  mostly abandoned now'
We looked at him aghast. Shit! We would starve to death and it was only our second day out! Luckily he took pity on us and gave us a tin of tuna and some crackers. 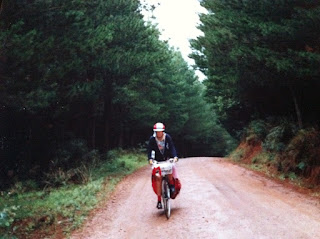 That night we camped near one of the abandoned homesteads. 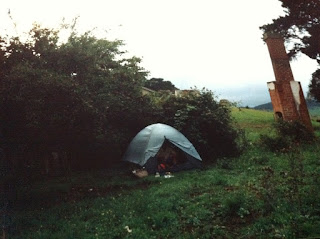 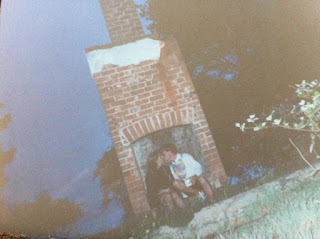 The following day we worked out the shortest route to the next real town and began cycling. It was not very long before we realised that we probably should have purchased a topographical map. The short route was turning out to be a long route of very steep mountains we had to walk up. 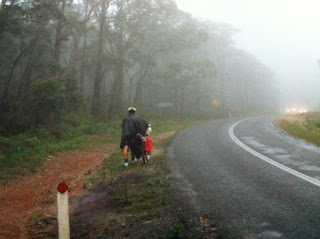 We finally made it to Bega - yes where the cheese comes from - though I got a flat tyre and ended up having to get a lift in the back of a ute. We were really stuffed by the time we reached Bega and said, stuff it, we'll stay in a hotel tonight. 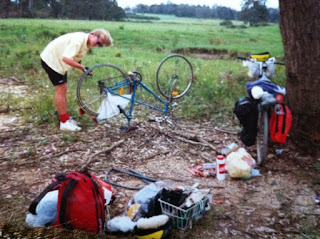 There was one old historic two storey hotel so we parked our bikes outside and went in to the lobby. The place appeared to be deserted. Eventually an old spinster came out.
'What do you want?' she asked.
'Ummm, a room?'
'I'll have to check!'
She shuffled off and came back with two of her equally elderly sisters.
'You can have room 13 up the stairs, bathrooms down the hall, don't be late for breakfast' one of them said.
We went up to our room. It turned out we were the only ones staying there. There was a long hallway of creaky floorboards and only the area outside our room was lit. To go to the bathroom we had to take a torch.
'Let's escape the three creepy sisters and go out for dinner and maybe there's a movie on at the old cinema down the road,' Russell said.
Guess what the one and only movie showing in town was? 'Freddies Dead' in 3D - no joke! 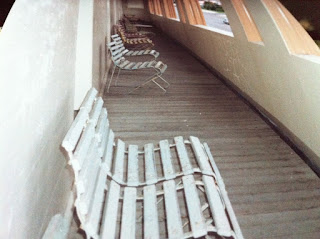 We didn't sleep well that night and that's probably why first daughter was conceived in Bega! We celebrated our escape from horror town the next night with champagne, feeling lucky to be alive.
By the way we eventually made it to Melbourne but had to train the last section because I just kept feeling too exhausted and strange - pregnancy does that! 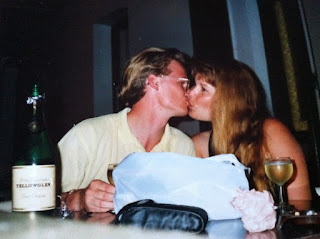