The Ensete Eating Dorze People of Ethiopia in Their 'Beehive Huts'


‘The tribal warfare amongst the d’Scarlett clan teenagers seems to be dissipating, though the Monkey still suffers from conversation interruptus, much to her extreme annoyance. Yesterday, Occy declared it was Day 4 with no internet and a meltdown was imminent.
As the sun rises over the mountains surrounding Lake Chamo, bathing the Monty Pythonesque sweeping plains below in golden sunlight, the animals begin their morning rituals. The Monkey cries for food, the Pindl-cat photographs the surrounds and the Occy writes the words that will go down in family history.’
So began my journal on the morning we left Arba Minch, Ethiopia and set out to visit the Dorze tribe. This tribe is characterised by their tall Beehive shaped huts – this of course is our western interpretation as you have seen in my previous posts the Ethiopian beehive looks nothing like our beehives! The huts actually have two windows set high and a doorway placed to emulate the elephants that used to roam the area.
We climb the side of the Guge Mountains in our four wheel drives til we reach the Dorze village. It is significantly cooler up here, especially compared to the searing of the Omo Valley plains below. We leave our vehicles at the edge of the village and follow a winding path through false banana plants and other flowering bushes til we come to the first characteristically shaped hut. The hut stands at 12 m high, it is constructed with vertical hardwood poles and woven bamboo (this bamboo is for some mysterious reason cut in the moonlight only!) and it’s topped with a thatched roof of ensete leaves. Over time termites eat away at the base and the hut gradually gets lower and lower until eventually a new hut is needed but this process usually takes about 80 years.

A Dorze woman sits outside scrapping ‘Ensete’ the false banana plant – the pulp is fermented for three months under bananas leaves in the ground in an anaerobic process that produces, when finally baked, the most delicious tasting flat bread called kocho I’ve ever eaten. It is typically eaten with a spicy paste of chilli and oil or fresh honey. While ensete is extremely valuable for food security, it is used for more than just food – the fibrous leaves and stalks are used for production of clothing, shelter, and baskets, as well as for ceremonial practices. Parts of the plant are also used to promote maternal health by aiding in stimulating placental discharge, and traditional practitioners use it to help heal broken bones and reduce swelling of joints in both livestock and humans.

When I was a teenager I owned an Ashford spinning wheel and regularly spun wool. I thought I’d give the hand held spindle the local ladies were using a twirl and spin out some cotton yarn – um, not so easy! I felt like a retarded Klutz-bum! 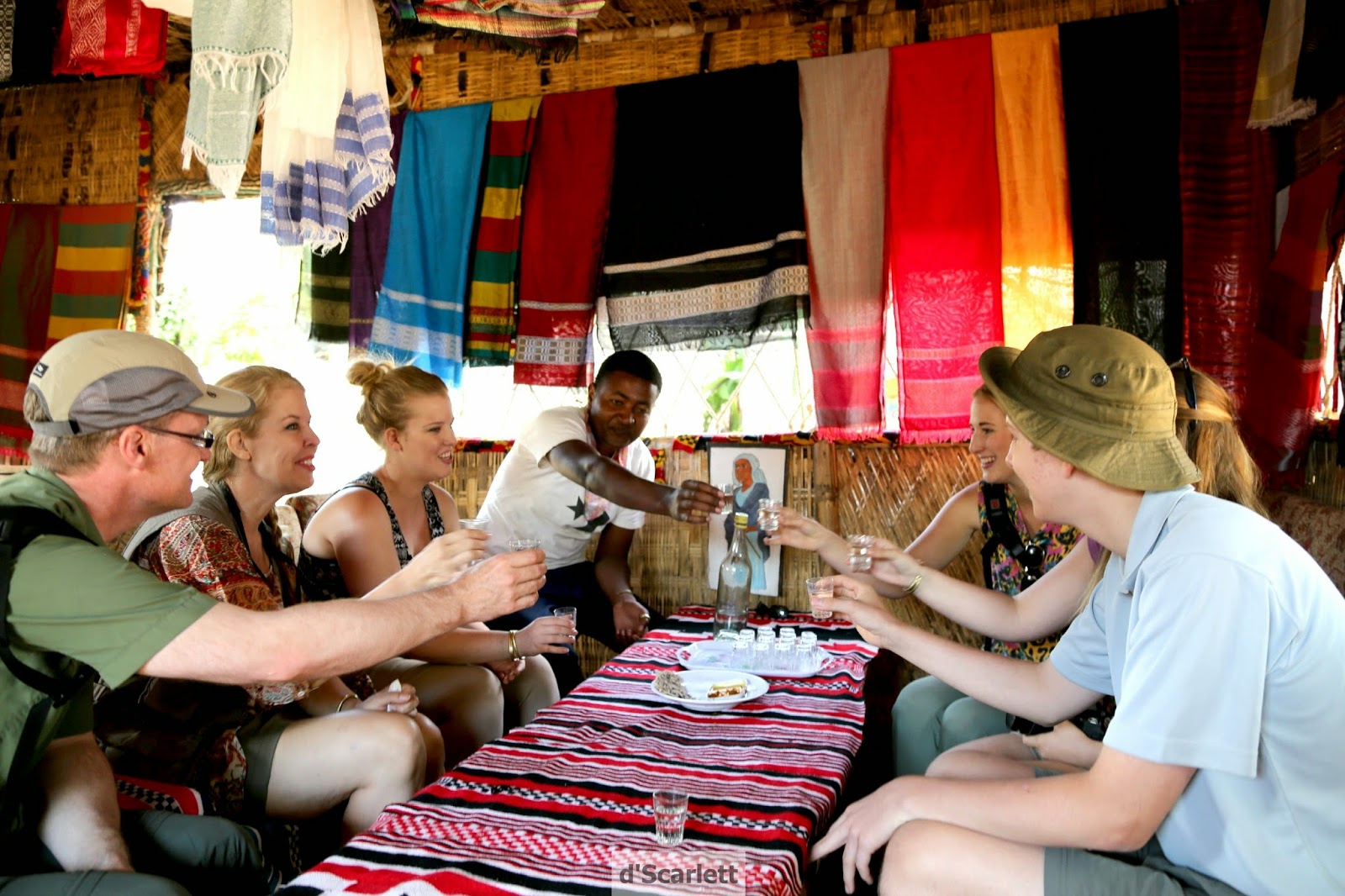 The Dorze also make a liquor called Araki similar to the spirit the Ari tribe produce only the Dorze version is flavoured with garlic (which makes it oily and disgusting and it being terribly strong I proceeded to get quite tipsy on the three traditional welcome shots which had the added effect that I then proceeded to try and buy everything in the village!) The Dorze people are famous for the traditional 100% Ethiopian cotton cloth called a Netele or Gabi, usually with the colourful border called a Tibeb and of course I have to have one.
Most of the huts have their own gardens containing ensete, vegetables, spices & tobacco. We leave the Dorze to visit with a much poorer tribe in the lowlands - next blog post.