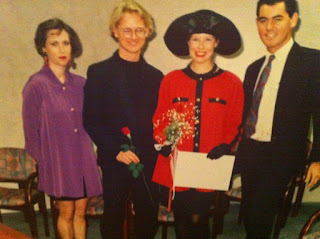 How many people do you know who have been married four times - to the same person? Only eccentrics! In 1992 Russell and I caught the train across the Nullabor to Sydney and then down to Canberra. From Canberra we cycled over misty mountains and along beautiful coastlines to Melbourne where we decided to get married. We planned an eccentric medieval wedding but unbeknowns to us we'd managed to get pregnant with first daughter. How does a medical student not do family planning? That question followed us through all four children, each one an equal surprise 'OMG we're pregnant again - how did that happen?' Well if you have sex every single night of your life it's bound to really isn't it!
This unexpected occurrence meant that at five months we had to high tail it to the registry. That's us above. 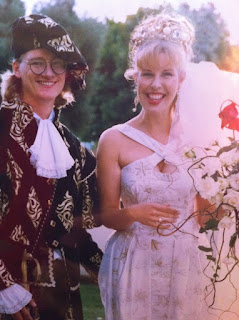 Another year of uni later when first daughter was 5 months old, we had our second wedding. Everyone dressed up in medieval costume - the Grim Reaper interrupted our vows by thumping his sickle on the floor of the little old wooden church, and then commanded 'Now you may kiss the bride!' Friends flew in from Finland and so we gave them the honour of the first wedding dance - a tango!(see below) Being Danish it's traditional to serve tiny glasses of akvavit (kind of like schnapps but way better)  say 'Skol' and throw them back quickly with each course. At 60% proof we managed to have most of the guests under the table by the time the Kranzekage wedding cake came out. 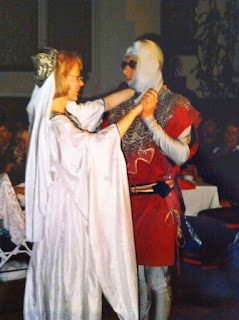 In '98 we became members of the Latter Day Saints (Mormons) and duly had our third wedding - a sealing in the newly constructed temple in Perth not just for time but eternity.  This was an interesting social experiment in bias and prejudice versus acceptance. One of my dear friends said he would of been less shocked if I'd joined a witches coven! Not long after we moved to Queensland and were invited to attend a wedding in India - it was the brother of one of the doctors Russell worked with and a group of us went along for an intense fortnight of all things Indian weddingish- mainly a lot of scotch drinking, dancing, henna handpainting and more scotch drinking. 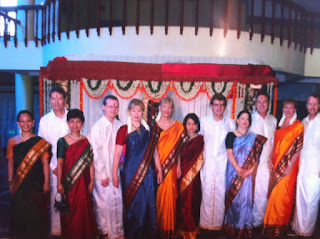 I think this rather put ideas in Russell's head because then the proposals started coming thick and fast. It was 2004 on the Great Wall of China. The kids had run off along the wall and into the distance, no where to be seen and Russell says to me: 'I just need to get something out of my backpack' and he kneels down, pulls out a massive pearl necklace and asks me to marry him - again.
A Chinese couple had stopped near us to watch and when I finally, quite overwhelmed, said 'Yes' they started cheering, clapping and saying 'Vely good, vely good!'
. 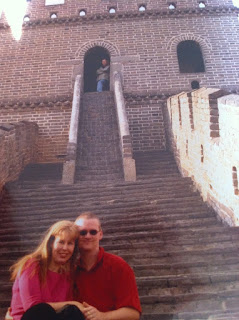 Several years later we were in Las Vegas together at a mesotherapy conference and he slips me a piece of paper across the table.
It reads 'You look nice today'
I write back 'Thanks'
Then he passes it again 'What are you doing later?'
I frown at him thinking what a weird question. He passes the paper again:
'Wanna get married?' He'd organised everything.
A limo picked us up with champagne and carried us off to the Chapel of Love where we were duly married - again, for the fourth time. The minister was gay, an absolute scream and then afterwards tried to get us on board with his multi-level marketing of Noni juice. Nothing like marrying people and signing them up as well! 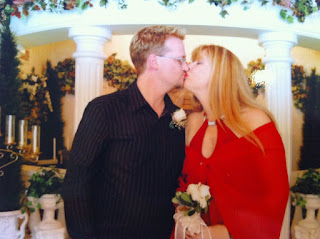 In 2008 we had the most incredible journey down the Nile and to the pyramids. As we're about to get on our camels to ride toward the pyramids Russell drops down on one knee and proposes - again. 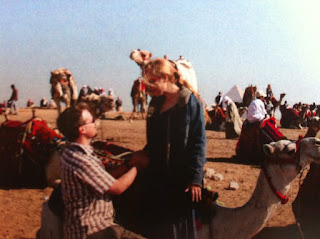 This year we travelled to New York, Bahamas, Cuba and then Orlando. We went to the Kennedy Space Centre and guess what - he proposed -again! Enough with the proposals already - when is the next wedding? 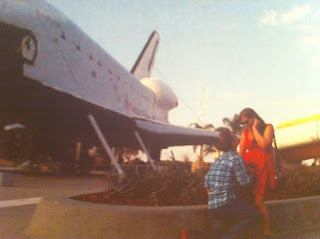