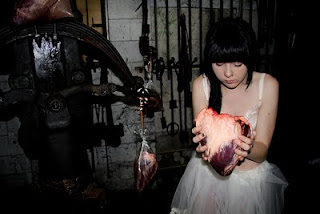 Have you ever found yourself standing on the edge of a precipice, wondering whether you'll step back or step off? Yesterday second daughter, who is an intellectually artistic photographer in her final year of high school, was agonising over her university preferences. She desperately wants to step off the precipice and have her photography college of choice catch her. The safe option of course is to step back and apply to all universities offering a photography degree. I mean, her academic level is second to none and artistically she's a genius - just saying! Then a rather interesting thing happened. You see second daughter has inherited a great ability to think laterally from me. Fortunately she also has her fathers sense of logic so she's not completely airy- fairy,arty-farty!
In fact, for myself lateral thinking is such an integral part of my thought process  that the usual options often don't occur to me, frequently to the general frustration of my very logical husband.  And so it seemed to be for second daughter when she suddenly cried out in frustration that she didn't actually see that she needed to go to university at all! A brilliant plan had taken root in her mind and that was that she would go to London where first daughter's Godfather lived. You see The GodFather is a composer and has many artistic connections, ergo he knows many well-known photographers and surely she could study on the job so to speak with them.
So the option second daughter chose was in fact to step off the precipice, but not in the hope of being caught but of flying! Sometimes we are given choices in life that seem impossibly difficult at the time, but in fact what we're being offered is  a second chance at the life we want for ourselves.