You've Been Engaged How Many Times?

I was playing Bauhaus Bela Lugosi's Dead  one day in the car and giving the kids the essential education on who the band and Bela Lugosi were. For those that don't know, the band chose the name Bauhaus 1919, a reference to the German Bauhaus art movement of the 1920s, because of its "stylistic implications and associations". The band also chose to use the same typeface used on the Bauhaus college building in Dessau, Germany. The Bauhaus movement was spearheaded by three of the worlds most famous architects, Gropius, Meyer and Mies van der Rohe, a design movement that was supressed by the nazi regime.
Bela Lugosi was of course the famous Hungarian silverscreen and Broadway actor who played Bram Stokers Count Dracula in1927. He was characterised by minimal makeup and his strong Hungarian accent, which is why we all walk around these days saying 'I vont to suck your blood' in a creepy Hungarian accent and paint our faces white when we pretend to be a vampire.
Anyways, I then mentioned that the song, Bela Lugosi's Dead is played in the brilliantly underrated arthouse film Th Hunger.  It is the totally classy story of a love triangle between a doctor (Susan Sarandon)who specializes in sleep and aging research and a counter-culture vampire couple (Catherine Deneuve & David Bowie). That night we watched the dvd - the kids were entranced by the film. Second daughter began researching ankh jewelry with a hidden dagger like the Deneuve and Bowie wear in the movie and we spoke about macabre jewelry. 'My first engagement ring was actually a mourning ring worn in the 19th century to remember the dead' I told her (pictured below). 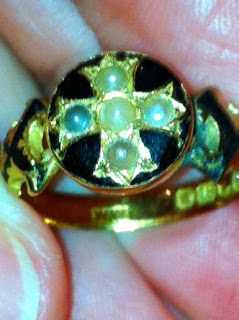 'Wow, how Gothic' she said.
'How many times have you been engaged, mum?' first daughter asked with a starry eyed look in her eyes (she likes Romance novels).
'Oh, well, four basically but if you include all the times your dad's asked me to marry him seven'.
Then third daughter, ever scientifically measuring, asked 'Did you keep all the rings?'
'Of course' I replied.
'Well who were all these people you were engaged to, how come you never tell us any of your stories?' second daughter cried. (Which is actually why I started blogging - so my children could read my stories).
The first one was Saul Atkinson, or Skinny bums, as my dad called him. (See post Surfin' Bird Shark Bait)
He is a chef, surfer and artist. Everyone around him was either arty or alternative (mods, punks) and I remember the first party I ever went to at his house my eyes were like saucers at all the bizzare clothing and the weird but strangely stimulating music. I'd never been around people like this, in fact I hadn't even known they existed. It was one of those life altering moments. 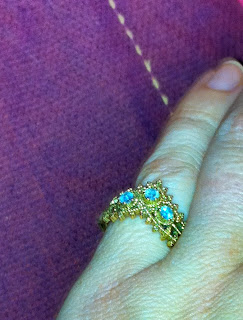 My second engagement was to Duncan Baynton, with whom I had trekked the Himalayas. He proposed with this typical Calcuttan engagement ring (above) in Calcutta one day after I'd been working for Mother Teresa. I'd known him for some years, he was the lead singer of an underground band called 'The Tarantulas' (cool name, I know) with my housemate John DiCarlo on drums, and later in 'Kansas City Killers' (see pg 7 of link) They played originals as well as some Cramps and other alternative covers. 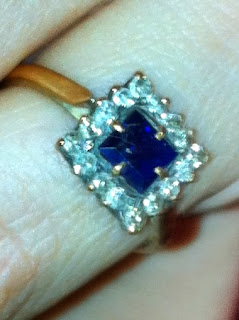 Later on in Agra, after visiting the Taj Mahal, I think he could sense my vacillation because he reinforced his proposal with this antique ring which had supposedly belonged to an Indian Maharini. Even though he was intellectually brilliant and we were well matched, the underground scene he lived in was steeped in drugs. My survival instincts kicked in.
After this I became briefly engaged to Michael Mattinson, a Photographer working for a local newspaper. He thought I was the most interesting person he had ever met, but still managed to to ask me to take out my diamond nose ring I'd acquired in Kathmandu 'just for this first time when you meet my parents' - conservative South Africans. God knows what I was thinking! After the initial rush, excitement of first love I realised it just wouldn't work. One day shortly after I moved in with him, I was playing an LP of The Cramps ('I'm a garbageman' if I remember) on the record player really loudly so I could hear it out in the garden. Michael came tearing out of the house. 'What on earth is that god damn awful noise?' he asked with a pained look on his face. Well, I just knew it was doomed from that moment. It was the equivalent to tearing the pages out of the Bible in front of a devout Christian.  To top it all off, in a temper tantrum he threw a precious glass bowl against the wall - he was sulking because I wasn't paying him enough attention. A friend of mine who is an artisan glassblower in Margaret River, Kent LeGrande, had blown this beautiful glass bowl before he had an awful accident on his motorbike one new years eve and lost the use of one arm. He still blows quite successfully now, but it took him years of bravery and hard work to be able to adapt to his disability and continue with his passion (see link for photographs of his studio work). In fact I was absconding up to Perth on the weekends to rendezvous with a paramour I'd been seeing for quite sometime, Simon Carlin, even whilst getting engaged to Michael. Clearly something was rotten in the state of Denmark. 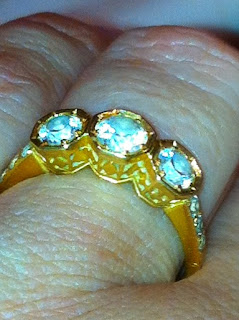 I had already met Russell, before going off to India, at the Busselton nurses quarters but that's a story for another blog. He was my fourth engagement. He was the person I was meant to marry. I had finally found my life partner!
He was also my fifth.... on the Great Wall of China... 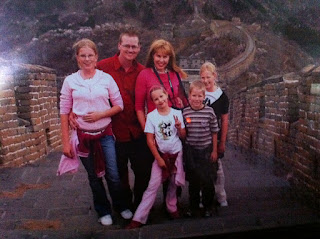 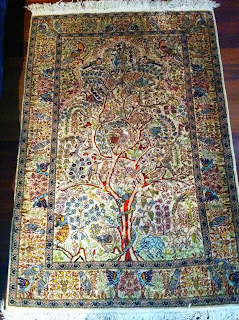 And my seventh.... At the Space Shuttle Cape Canaveral.... (see blog post Four Weddings, No Funeral for the proposal photos) 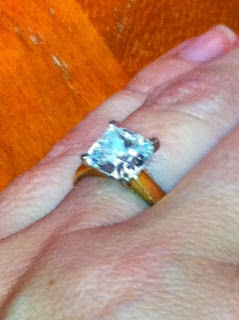