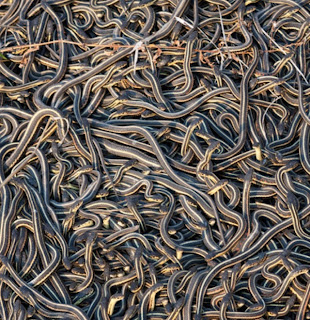 Yesterday I was reading Carl Sagan and Ann Druyans book Shadows of Forgotten Ancestors when I came across a fascinating section (on dominance and submission) on the Manitoba garter snake. These snakes hibernate in enormous dens of up to ten thousand individuals, the proverbial snake pit.
'In springtime, the females are sexually receptive as they emerge, one at a time, from the den. And a good thing too: Waiting impatiently is a gang of several thousand males, who pounce on each female as she exits, forming a writhing, orgiastic, but largely infecund "mating ball." Competition between males is fierce, both pre- and post-coitus; after mating, the victor will insert a vaginal plug so no rival can succeed if he has failed to impregnate the object of his affections. Even among snakes the is a core of basic behaviour - including dominance, territoriality and sexual jealousy - that humans have no trouble recognising.'
Click on the link to watch as a  female garter snake emerges from a snake pit.
Luckily we don't have those writhing smakepits in Queensland because R is completely freaked out by snakes. Personally I quite like snakes as long as they're not poisionous - nothing wrong with a nice friendly python, here I am, kissing one. 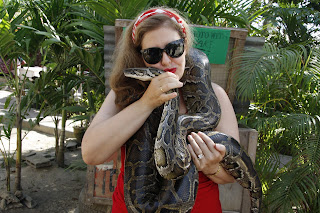 Since moving to Queensland in 2001 we've had a few adventures with various snakes. The first was when we were living in Montville down on the Sunshine Coast. We were renting an old wooden  two storey house. One day the kids came and said there was a python out on the back balcony.It was fairly big, 2 meters long and about the same diameter as my forearm. The poor thing, I thought, it must be hungry! I went inside and came back with an egg for the lovely cute python. It had placed itself just near the steps going down so I went down a few steps and then offered it the egg. Bloody grumpy python! It lashed out and snapped at me! I nearly fell down the stairs! I mean there I was coming with milk of human kindness and it snaps at me! I didn't think it was so cute after that. 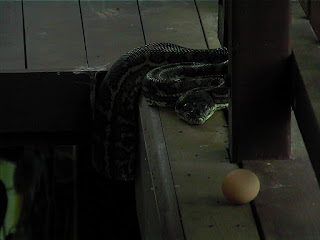 We got the neighbour (being a local he was used to pythons) to take the snake away down the road. A few days later we were on the front balcony having a cup of tea when R suddenly noticed that tangled in the wisteria branches near our ankles was the same python - apparently they home unless you take them more than 5 kms away! We called the snake catching man and he took the python 10 kms down the range. Nearly everyone up on the Range covering the Maleny-Monteville-Flaxton-Mapleton area has a python in their roof - they're very good at keeping the mice, rats and possum population down.
Our next encounter came a few years later after we'd moved to Cairns in the far north of Queensland. We had a lovely grey kitten that went missing one day. After about a week or so there was this god awful stench that began to pervade the kitchen and front balcony area. It smelt like something was dead. I had a girlfiend, Fuschia, visiting up from Monteville and she got her ex around (they're useful for some things!)  to crawl under the house and see if he could see anything. He emerged a while later with eyes as huge as saucers. 'There's this ginormous python under the house. It's dead, it's stuck under the airconditioning unit, I can't get it out. It's got a dead grey kitten stuck in its mouth!' Hence the smell. It turns out it had choked on the kitten!
The next day my intrepid mother crawled under the house with a meat cleaver and hacked the python in two and dragged the two halves out and buried it. Because it had been decomposing for a while it was running with decomposing flesh and body fluids as she dragged it out - yuck! It was as thick as a thigh and 3 meters long!

A few years after this my mum had a white Corella cockatoo called Willie. He was sitting in his cage in the kitchen while I was cooking dinner one night and he was have a thing or two to say, making a racket and generally being a noisy pest so I took him around the side of the balcony and put him under Third daughters window. A little later he made some high pitched distressed noises and I called to him that I would be there in a minute to see what he wanted. By the time I got around the side I could see there was a long skinny python wrapped around poor old Willie. I screamed through the window to third daughter 'Get dad, there's a snake, there's a snake' I don't know I called for R - he came out and grabbed the only thing available - a plastic kids beach shovel and started trying to chop the snake as it slithered out of the cage and under the back steps. Luckily despite numerous attempts, in his fearful frenzy he missed - pythons are protected in Australia. It was too late!  Willie gave the death rattle and curled his toes up. Now obviously pythons aren't terribly good at advance planning, because even if it had managed to swallow poor Willie it would of been stuck in the cage, it's girth too wide to fit back through the bars.
That night when we went to bed R thought he could hear pythons. 'What's wrong with you?' I asked.
'I can hear snakes, the whole hill behind us is probably writhing with them.'
He then decided he had to go to the loo but didn't want to get off the bed - by this time he was convinced there were probably more pythons under the bed. He stood up on the bed, took a giant leap off the bed to the ensuite. When he lept back on the bed  he peered at me closely and said 'In fact, you're looking a bit snakey too!'

Email ThisBlogThis!Share to TwitterShare to FacebookShare to Pinterest
Labels: snakes