'Well everybody's heard about the birds' the old Cramps song called Surfin' Bird reminds me of the day I could of been a Great Whites (shark) Lunch. I first moved to Margaret River back in '85. I was sick of living in the city and loved being surrounded by nature. My then boyfriend, Saul Atkinson, was a Chef, artist like his brother Shaun Atkinson, and both boys were surfers. Saul had tried to teach me to surf but I was completely un-co about the whole standing up on the board thing. Eventually I discovered Body Boarding and loved it. I had a Mach-7 triple fin board that set me back $300, webs, fins, steamer (it's cold water there) the whole works - it was serious, man. Of course all the surfers held body boarders in great derision, referring to them as 'esky-lidders' and calling out things like 'When you grow up are you going to do real surfing?' Ah, it was fun! 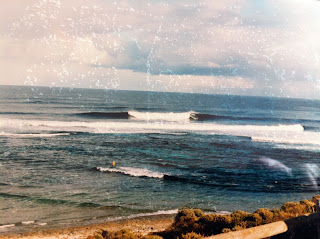 This is a picture of the main break at Margarets. It's perfect because on a good day it has both left and right hand breaks. We were always looking for the left hand breaks because Saul was a 'goofy-footer' being left-handed. Post Saul I continued to body board - below is a photo of one of my fiances, Michael Mattinson - a Photographer, whom I insisted learn to body board. He wasn't too happy after a few square dumpings and gave it up so I gave him up. 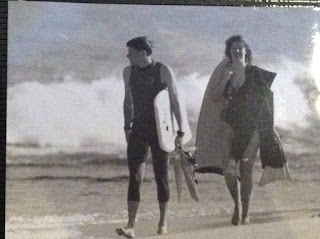 I then started to go out with Simon Carlin and hang out with his zany friends. One day early in our relationship the boys decided we should all go surf one of the reef breaks near Smiths Beach. 'You're up for the waves aren't you?' Simon asked me. 'Sure, no problem' I nonchalantly replied. I knew this could be a big break if the swell was up and I'd never surfed a serious reef break before but I wasn't going to act like a pussy now. I had someone to impress!
We drove down to the beach, got kitted up and paddled out. The boys all went straight for the main break and I paddled off to to smaller break at the side. Long drifts of seaweed kept grabbing my fins. I sat for a while up on my board watching the waves which were getting progressively bigger as the swell increased. I watched the boys catching a few sets and sometimes going under. Th darkness of the reef and all the seaweed was freaking me out. I had to paddle further out the back to the edge of the reef to avoid getting dumped onto the reef by the huge waves that were now rolling in. Shit! I had to get back to shore, this was definitely not for me, I didn't care about proving anything to anyone anymore I just wanted to get back to the beach without getting razored on the reef. I signalled Simon to come over and asked him to kindly show me the safest way back in.
Later that night I was having drinks with an old housemate of mine, John DiCarlo, telling him about the days adventures. Suddenly he put his glass down on the table and said 'What? You were out at that break TODAY? Don't you know they spotted a White Pointer cruising up and down the reef edge today. It was there most of the day apparently!'
I nearly fell off my chair!
Posted by Unknown at 06:04