Events that happen in the lives of our children can cause us to reflect on our own experiences in a misspent youth.  Eldest daughter got her drivers licence a few years ago and happily is a very careful driver. Second daughter is in the agonising process of going for her 'P's' at the moment. Above is a picture of my first car that my dad bought for me- note the P plate in the window. It was a yellow Renault, bought from a university lecturer at the uni I was attending. My dad had a thing for European cars so it was an easy choice and the deal was negotiated in the wooden hallway of the lecturers garlic scented house. Pierre, as the car being a good French car was affectionately named, helped get me to and from Uni, an otherwise two and a half hour bus trip each way and more importantly saw me through my first nightclubbing expeditions and midnight rendezvous with boys. 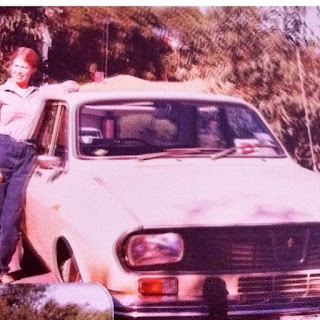 In the second year of Pierre's short life I moved out of home and shared house with a girlfriend, Wendy Holland, and a gay guy (Marshall) and then an ever increasing number of stray people who needed housing. Wendy would come home with a doleful look in her eyes and say 'So-and-so just had a fight with his parents and needs somewhere to live, do you think we can squeeze him in?' In the end we had so many people in the house we even had them in our beds - I had to move out, I mean, enough is enough already! Anyways, one evening Marshall asked if he could borrow Pierre- he had a new fancy and wanted to take him out but had no car of his own. At 2am Wendy wakes me 'Dorit, quick get up, Marshall's being held down at the police station and we have to go get him out!' FFS! Down at the Perth central police station we collect one very drunk and miserable Marshall.
'Oh Dorit!' he says to me, 'I'm sooo sorry, the bloody Pigs have impounded your car and put a yellow sticker on it.'
What the hell? A yellow sticker means something need fixing on the car and it is considered unroadworthy which I knew was not the case.
'The bastards started picking on me just because I'm gay. They kept harassing me and slapping me until I admitted it, then they told me they were going to sticker my car' he wept.
Of course I rang dad and the next day we went to look at the car. The entire floor and all the seats were wet where the rain had gotten in the open windows and it smelt of urine and alcohol.
Lesson #1 learnt - don't lend your car to friends who are going out drinking!
We sold the car and bought a sexy red, sporty Cortina that lasted approximately one year. About as long as it took for me to turn right at a traffic light intersection with the setting sun in my eyes and an approaching car that I couldn't see and promptly drove into the side off.
Lesson #2 don't try turning at an intersection with the sun blinding you. 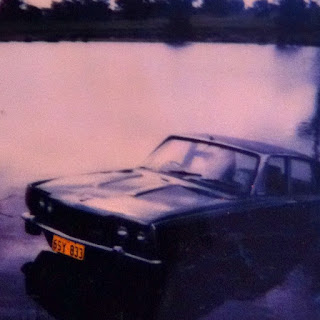 This is car number three, a British racing green Rover, affectionately named Rover (original I know). My dad had a Rover that he refused to sell to me when my parents moved to Europe for a three year stint. I was so miffed I went out and bought my own Rover! The Rover was brilliant because it had a spare fuel tank that invariably came in handy on the long country runs between Perth and Margaret River, where I had moved to live. Living in Margarets with an artsy, surfing crowd it soon became obvious that the Rover was both expensive to maintain (probably why my dad hadn't wanted me to buy his) and impractical for transporting surfboards and large paintings. What do you think is the most creative way a bunch of artists can come up with for claiming the insurance money? 'Oh, we were picnicking by a lake and it accidentally rolled into the lake!'
Lesson #3 Don't ever try that trick - the insurance company kindly dried out the interior for us with their special super heater drying thingys and handed the damn thing back! 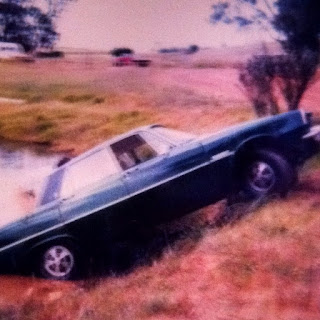 We traded poor Rover in at a car yard. As I eyed a blue Ute the car salesman made the deadly mistake of saying 'Oh you don't want that car love, that's a blokes car, it's too heavy for a girl'. This was only a few years after Maggie Thatcher had proven that women could in fact do the things a man could so I promptly glared at the  salesman and declared that in fact it was just perfect and that was the car I wanted. The 'Beaut Blue Ute' was perfect for large paintings and surfboards, and yes in all honesty it was bit hard to steer ;p so after a sufficient amount of time had passed for me to maintain my feminist dignity we upgraded to a 4WD Pajero, perfect for surfing camping in the wilds of the south west of Western Australia. 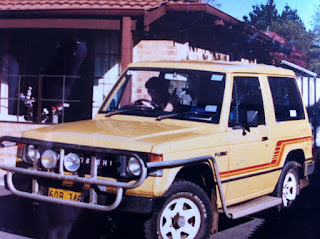 The Pajero proved to be reliable car until one day it wasn't. I was driving up to Perth from Margaret River on a perfectly straight stretch of road doing the speed limit, 100km, when all of a sudden the Pajero starts fishtailing and the Pajero is doing cartwheels in the air. The next thing I know I'm sitting upright strapped into my seat in the middle of a paddock and my hair is dripping wet. Now sometimes on that long drive (300+ kms) I would stop off half way and swim 50 laps of the Olympic pool at Bunbury, but not on this day. A man appeared at the passenger side window.
'Oh,' he said 'You're alive! Are you ok? Here let me help you out, the farmer down the way is ringing for an ambulance. You'd better lay down on the grass and don't move'.
All I could say was 'but I haven't been swimming. Why is my hair all wet?'
It transpires that the rear axle had a hairline crack in it and chose that particular moment in time to snap. The car rolled about three times, the last time into a ditch which was luckily full of water because my head went out the window under the water before the car righted itself, hence the wet hair. The man had been driving behind me with his family and saw the whole thing. They thought no one could have survived that so he told his family to stay in the car. The farmer had also seen it. The ambulance eventually came, I was take to Harvey Hospital (read tiny out of the way) and xrays revealed nothing broken. The nurses and doctors declared it a miracle I was not only alive but unharmed. They phoned my dad and told him I'd had a 'little accident but not to worry nothing broken' so he decided he could wait til the next morning to drive down and collect me. I was really upset that he was so nonchalant about the whole thing when I nearly died! I think he got a shock too when he saw the car and found out what had actually happened - well his face went kind of white so I think so...
Lesson #4 Expect it when you least expect it.
The Pajero of course was a write-off and was replaced by a sporty gold French Feugo in which I'm glad to report no mishaps happened! 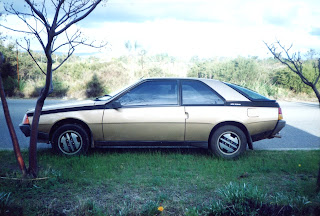