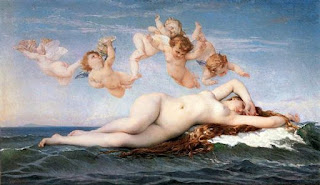 Alexandre Cabanel Birth of Venus
When I was the age Venus is now, 19, an artist said to me that I would make a great model for a Venus painting. At that precise moment I determined that if I ever had a daughter she would be called Venus. Because I had chosen her first name R chose her second name. He came home one day all excited: 'I've seen this fantastic name if it's a girl, but I don't know how you say it' and proceeded to spell out SIOBHAN. My sister Rae immediately piped up: 'That's pronounced Shivorn - one of my friends is called that, it's Welsh'. Well there you go, that's how Venus Siobhan got her name!
Named after the Roman goddess of love, obviously she is reflected on a visual level in both Cabanel's and Botticelli's famous paintings of the Birth of Venus. As it just so happs the voluptuous curves of the Renaissance Venus is a perfect suit. The style of painting also suits Venus's ambiance being a great lover of the Romance novel - she can consume them at a frightening rate! 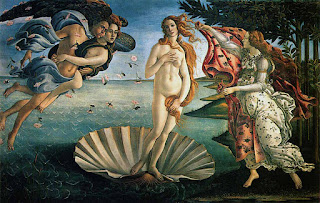 As it just so happens Venus is also a great fan of that modern day Venus, Marilyn Monroe, and has perfected her pout, now known amongst the family as Venus's trademark pout that she displays to good effect in many photo opportunities. 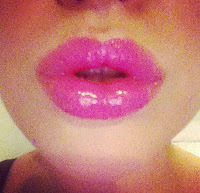 Of course Venus loves Marilyn Monroe movies and the movie that makes me think of Venus the most is
Gentlemen Prefer Blondes. 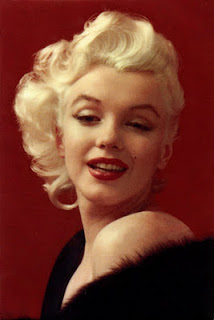 Another actress that makes me think of Venus is Brigitte Bardot. 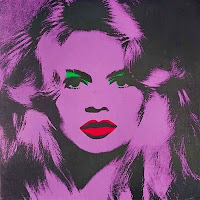 Her infamous song with the enigmatic Serge Gainsbourg - Je t'aime moi non Plus which is played in the brilliant movie of Gainsbourghs life Gainsbourg was influential in causing Bardot to catch the attention of French intellectuals. She was the subject of Simone de Beauvoir's 1959 essay, The Lolita Syndrome, which described Bardot as a "locomotive of women's history" and built upon existentialist themes to declare her the first and most liberated woman of post-war France. Interestingly this links in to my perception of Venus as a person of heightened Existential and Social Intelligence. 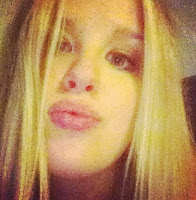 Social intelligence is what really makes humans what they are – it defines for us what it's like to be a human being living at the centre of the conscious present, surrounded by smells and tastes and feels and the sense of being an extraordinary metaphysical entity with properties which hardly seem to belong to the physical world. Social scientist Ross Honeywill believes social intelligence is an aggregated measure of self and social awareness, evolved social beliefs and attitudes, and a capacity and appetite to manage complex social change. Chimpanzees are very clever at the level of being able to make observations and remember things. They can remember better than humans can, but they, again, are inept at handling interpersonal relationships. So something else is needed. What is needed is a theory of mind, a theory of how other people work from the inside. This is social intelligence.
This is also what makes Venus so good at her potential field of study and work - PR, Marketing and Events Management. She works with my good friend Jules Adams at her company VTS as P.A. and gets to apply the PR she learns at Curtin uni to her job. A few weeks ago she was interviewed by Colosoul for a volunteer position. She was given it immediately and thought she would be helping with some events. Her first day on the job she discovered she had been put in the Devil Wears Prada position of liasing and coordinating between the Editor-in-chief and the events managers. They report to her. 'Are you ok with that?' the boss asked. 'Oh sure!' Venus replied, whilst inside she was thinking 'Faaaarck! I don;t know what I'm doing. Obviously I must look like I do!' This is typical - people immediately warm to Venus and and innately trust that they can depend on her. She has the most astonishing work and moral ethics.The work ethic she gets from R but the moral ethics - I have absolutely no idea where she got those from, they must of skipped a generation! I can just picture the editor asking Venus if she would just make sure all projects were in a day earlier than originally requested and finishing with a Miranda Priestly 'That's all!' and Venus would actually find a way to do it to the tune of Nancy Sinatra's  These Boots Are Made For Walking.