Fried Insects with that Vow? 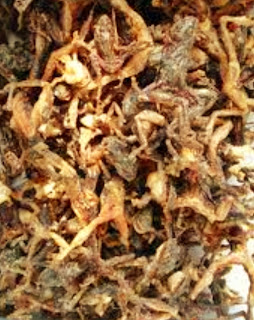 Oh my, I’m visiting my dad in Poppo for his 69th birthday and the internet is intermittent out here in the wheatbelt so it will be touch and go whether I can actually get photos on this post. I thought I’d let you in on my impromptu vows to R at our monsoon Buddhist wedding.
We had watched ‘The Vow’ together about a month before flying up to Thailand and R, being an incurable romantic, was quite taken  with the exchange of vows in the museum so I thought I’d surprise him. On our wedding night we had a delicious Thai dinner and a walk in the moonlight by the ocean. I said ‘You’re a dog you need motivation, so I’ve written you some vows.’ (For those of you that don’t know, that’s a line from ‘The Grinch’ oft quoted by various members of our family.)
1.       I vow to always go where the wild things are.
2.       I vow to always want to Moonbake with you.
3.       I vow to always agree to disagree on the ‘I jump, you jump’ thing.
4.       I vow to always partake of  lots of champagne and marzipan with you and remember the ‘Ris A La Mande’ on Jule Aften  Christmas Eve)
5.       I vow to always live in the warmth of your heart and love you.
Vow no. 5 is taken directly from the movie. Vow no. 4 refers to the comic first Christmas R had with my family in which he stoically chewed his way thru the cement textured Danish rice pudding my dad had baked (it’s meant to be light and fluffy….) that even our St Bernard wouldn’t eat, just to make a good impression. Vow no. 3 is from ‘our’ movie The Titanic, when Jack says to Rose ‘If you jump, I jump’ and R often quotes that to me to emphasise the fact that we are in everything together and he won’t be parted from me to the point that if I jumped off a cliff he would to! I always tell him not to be so ridiculous. Vow no. 2 – well what can I say, what can be more romantic than the thought of moonbaking together? 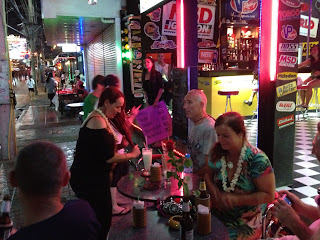 Vow no. 1? Well that happened pretty soon. The next night we went into Patong and soon found ourselves ensconced on barstools outside a bar with a large group of new Aussie friends, watching the amusing assortment of people wandering up and down the street at midnight. There was large number of beautiful women in very short skirts and very high heels sauntering past looking very alluring. One of our new friends lent over and said, ‘Look at the Adam’s apple, they’re actually men’. Wow – they certainly look so much more feminine than our transvestites.
At some point in between a rather lot of Pina Colada's that followed the lot of Elephant beers a little old wrinkled Thai lady came up to us bearing an enormous woven basket tray. 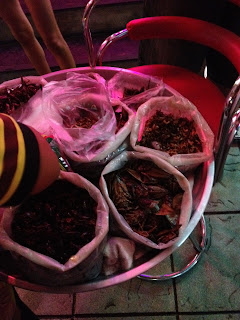 The tray was sectioned like a pizza into eight pieces and in each section was a different type of fried insect. My mum had had fried insects in Vietnam and had positively waxed lyrical about their deliciousness so I leapt from my barstool and surveyed the offerings. I chose the grasshoppers and the tiny frogs and acquired a bagful of each. The giant cockroaches – no, I couldn’t quite convince myself that they would be nice.  I could imagine biting into one and some pus-like substance oozing out – hmmm, no thanks, gag material. 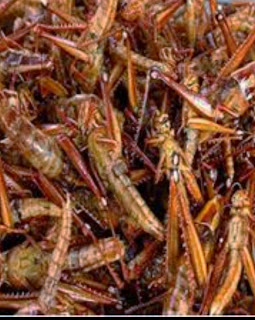 The grasshoppers were dry and delicious, just like really tastey spicey chips but healthier with loads of protein and calcium, and the wee little frogs were to die for! They tasted like crispy bacon - yum. Yes I would definitely recommend them.  Everyone else squirmed on their stools and made noises of ‘Oh yuk!’ but R seeing how much I was enjoying them braved a taste and to his surprise declared them delicious. One other brave soul gave it a whirl and agreed that ‘they weren’t too bad after all!’
Posted by Unknown at 14:21