'They're Buddhist in Thailand, aren't they?' a rhetorical question from R at 40,000ft as we were en route to Phuket for our 20th wedding anniversary (29-5-92 - note the palindrome - R has a fascination with number symmetry)
'We like Buddhists, don't we?' he asked.
'Yes, we like Buddhists,' I smiled at his need to check we were in unity on an idea, but the real question was why was he asking me this - it had come out of left field.
We landed in Phuket to a torrential downpour from ever darkening skies.
'It's monsoon season!' our driver informed us.
The hours drive to our hotel  at the southern most tip of the island was a turbulent ride as the wind gusted, whipping palm trees back and forth and pushing against the side of the car. Our suite faced onto the beach, a living, writhing black mass of heaving waves. No picture postcard turquoise and idyllic water here! In true Addams Family style I quipped 'Why darling, the weathers perfect for a wedding anniversary!' It certainly reflected our stormy and passionate relationship. Only one problem - this was supposed to be our first ever holiday of just lounging by the pool, sipping cocktails and reading books instead of madly rushing around trying to see as much as possible. After all, we had already been to Phuket for R's 40th a few years back with the children and done all that.
Personally I prefer the old-fashioned way travelling, which requires lots of time to slowly absorb the culture, have conversations with people, sample unique food, listen to local music and inhale the ambiance osmotically on a deep molecular level, something not possible on tight a time schedule.
We spent the first three days with cocktails in hand playing Yahtzee (R seemed to score a disproportionately large number of Yahtzee's - I'm almost positive there was a considerable amount of cheating going on!), dominoes and Pass the Pigs - a mindless but fun game easily played at dinner. This kept the wait staff entertained as they'd obviously never seen anyone tossing around a pair of miniature pigs hoping they would land in piggy positions like 'snouter', 'sider', 'double trotter' or blast and damnation 'makin' bacon' in which the two pigs land touching each other and you loose all the points heretofore acquired.
On the Sunday, as we were strolling between gusts thru the gardens to play some table tennis, I asked what we should do the following day.
R said rather off handedly 'Oh we have an appointment tomorrow morning with the Wedding Planner.'
'Haha! Very funny.' I replied.
As it turned out he was secretly delighted I didn't believe him but in fact he had planned wedding no.5!
Fortunately the 29-5 turned out to be a lovely sunny day. The makeup artist, hairdresser and photographer arrived early in the morning and proceeded to paint, blend, curl and shape my face and hair finishing off with a cascade of frangipani flowers pinned thru my hair. All the while the photographer was merrily snapping away as R managed to fall asleep on the sofa. 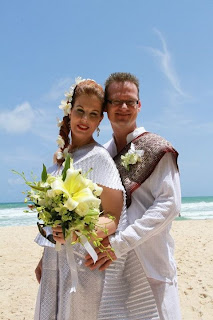 Finally we were both dressed in traditional Thai wedding costumes and taken an hour north to a small Buddhist temple where 5 Buddhist monks were waiting to bless us. R needed to pee (he always does when he's nervous) and they tried to dissuade him saying it was a long way down the back but he wasn't to be put off. When he came back he had a rather odd look on his face.
As we entered the temple hall the monks sat in their saffron robes in a line facing the entrance, the altar with the large statue of a golden Buddha behind them. We entered the temple barefoot and went first to the great altar and lit candles with a taper before the Buddha, our hands joined. Next came the lighting of the joss sticks for good luck followed by lots of bowing to the Buddha with hands clasped as in prayer to our foreheads. We then went to kneel on the hard marble floor in front of the first monk, the scent and smoke of incense surrounding us.
Because monks are supposed to live only on donations we were presenting each one with an orange plastic bucket(that they could use for their washing) filled with food and basic necessities like toothpaste and soap. R held the bucket as he presented it to the monk and I held his arm, it being forbidden for me to touch the monk as a female. Then we shuffled along to the next monk and presented his bucket and so on.
Offerings proffered we were then given blessings by the monks.Holy water was sprinkled on us and a white cotton string tied around both of our wrists to symbolise being tied together - both our eyes were moist with tears at this point. The central monk (who was a bit grumpy) daubed white paste in three dots onto our foreheads in a trinity symbolising good luck, good life and good love. Conjoining headbands were placed on our heads, the string connecting them representing a telepathic link to each others thoughts. 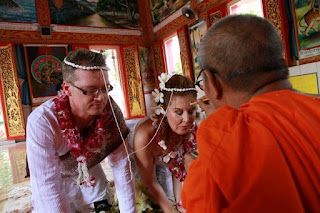 'Put this under your pillows tonight and whatever things you dream of will come true' we were told. I was slightly worried because the night before I'd had a vivid dream that one of our Siamese cats, Tiger Lily, had eaten a metre long snake head first and it had managed to bite the inside of her stomach on its way in and she died an agonising death! 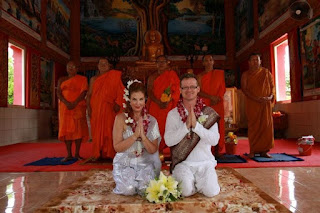 Next a ball of multicoloured yarn was looped around both of us and then all the monks. More blessings were said and this tied us together with the monks blessings for all eternity (the second time we'd been sealed for eternity-see post Four Weddings, No Funeral) and we exchanged words of love to each other.
This involved process interspersed with lots lots of bowing (and scrapping ;-p)with clasped hands to forehead to the monks, Buddha and each other took nearly an hour, at the end of which the monks arose with graceful ease as R and I staggered clumsily to our feet, trying to overcome the cramping and pain of kneeling on the floor for an hour.
We exited the temple hall to a shower of white rose petals in the brilliant sunshine.We were both over the moon - 'uberlunar' - after our rather tumultuous last year we had managed to find ourselves rather much in love again. R rather poetically said we were like the 'Golden Phoenix' couple, rising from the ashes to something completely new and wonderful. Our four teenagers thought it was rather vomitatious the way we carried on with each other in this new phase. 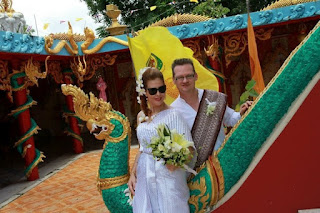 Anyways, back in the temple grounds we were given two huge paper 'Sky Lanterns' to light and send up into the air - the Thai version of releasing love doves. The first floated up into the nearest trees and the branches caught fire(whoops!) but we had more luck with the second one which drifted up away towards the clouds where it would float for the next half hour. 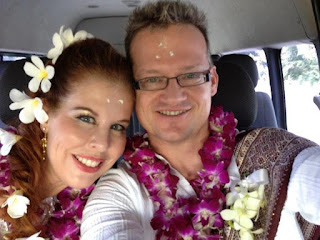 As we drove back to our hotel R said 'I wish I'd had my camera with me when I went to the toilet. It was in a new section of the temple still under construction way down the back of the grounds and there were all these huge statues of Buddha but they were all holding AK47's!'
Completely surreal!