Lucy and the Apes

For todays post I've finally managed to go back and add photos of the trek to the Orang Utans in north Sumatra.  Children can be amazingly ape-like.Last week when I was over visiting first daughter Venus in Perth I managed to catch up with some old friends. Our gorgeous friend Maddalena (our second daughters namesake)has a beautiful girl just over 1y.o. named Lucy. A clever little poppet, she uses sign with her small collection of words to extend her vocabulary. This reminded me of another Lucy, a very famous chimp. Chimps can master a few hundred words in AMESLAN (American sign language) and they reason, form abstract ideas and associate abstract ideas by similarity. Lucy, one of the earliest chimps to learn signing in the sixties, signed 'candy drink' after first tasting watermelon, and 'cry hurt food' after her first bite of radish. Other chimps were able to sign 'water bird' after seeing a picture of a swan. They can also understand verbal language but their physiology isn't designed for speech.
Chimps can reason to the extent of 'ArB, BrC, therefore ArC,' and if you didn't get that then there's a few chimps out there that are smarter than you! Now Lucy is a chimp after my own heart. She could open a fridge and various cupboards, find bottles and a glass and pour herself a gin and tonic! She would then take her drink, sit on a comfy couch and flick through a glossy magazine, identifying things she saw in AMESLAN. She would sign 'cat' when she saw a picture of a tiger and 'drink' when she saw a picture of a bottle of wine. 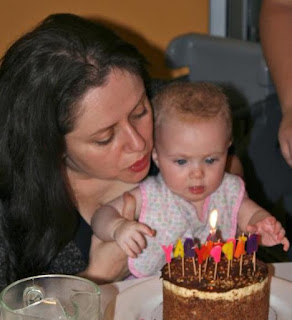 I am in fact expecting great things of our little Lucy given she's being brought up in an all female household with two mothers (poor little thing, the weight of expectation on her shoulders already - the inhumanity of it all!)But just look at the evidence-
In 1952 on a small island off Japan called Koshima, Japanese primatologists observed a group of 20 macaques.   Their food was inadequate on the island and was supplement with wheat and sweet potatoes dropped onto the beach.  In '53 a one and a half year old macaque called Imo worked out that if she took the sweet potatoes to a nearby stream she could wash the sand off them. Imos playmate soon also worked out to wash the sand of her sweet potatoes by observing Imo. In the following year Imos mother and another male began washing their sweet potatoes. In subsequent years other close peers and relatives of Imo learnt to wash their sweet potatoes. After 1959 when infants were born they were taught by their mothers to wash their potatoes. The colony of macaques had become a sweet potatoe washing community.
In 1959 Imo worked out that she could also take the wheat to the stream, drop it in, the wheat would float and the sand would sink to the bottom. She could then scoop the wheat out. This took a while longer to catch on in the colony because it requires more complex relation-thinking between objects, the monkey having to discard his food first, whereas in potatoe washing he can still hang on to his potatoe whilst washing it.
The really interesting thing that happened here was that after Imos initiative, other females copied her then youngsters of both sexes. The adult males were the slowest to pick up the cultural innovation. Carl Sagan speculates that perhaps because the males are fiercely competitive and heirarchy conscious,they would feel subservient if they followed Imos 'lead'. They would rather eat sand.
The Adventures of Princess Snapperhead: Trekking the Orang Utan: Sleeping in the hotel on our first night in Bohorok, Bukit Lewang, where the Orang Utan rehabilitation centre is in Leusa national park,...