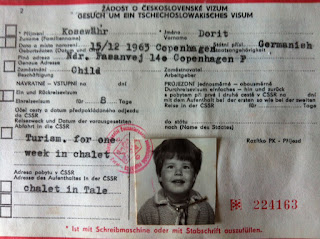 Back in ’67 my parents knew they were about to emigrate to Australia, so for the summer holidays in July they decided to do a road trip to Russia – the place they thought they would be least likely to travel to once they were settled in Australia. 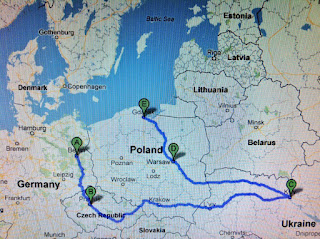 We set off in our red “Rirumph” as I called the Triumph we had, driving through DDR (East Germany) where my aunt (see the post in my dad's blog called 'My sister, my teacher-my tormentor) lived, she was coming with us, and on into Czechoslovakia. We had rented a cabin in the Tatra mountains at a resort (Soviet style) with hot springs nearby. 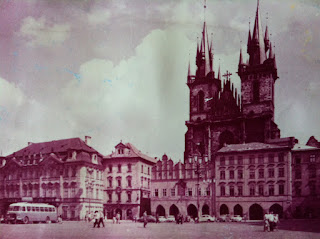 We were visited by deer who seemed to be quite people friendly and also a group of gypsys who were working at a nearby factory. They wanted to borrow some water from us to cook their gulash in and having shared our water with them they then invited us to share their delicious gulash. After a week in the mountains we drove on thru Prague (Pictured above) which reminded my mother of Copenhagen. 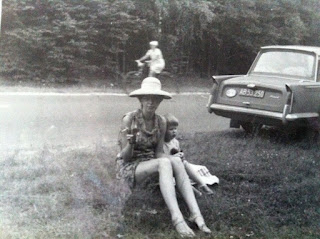 Driving on to the Ukraine border we had terrible trouble being allowed entry despite having the requisite visas. The problem was that my dad had given me a stack of old computer printout paper that I could draw on the back of to keep me entertained. The border guards got hold of the paper and took one look at all the numbers printed on the other side of the paper and immediately realised that of course – it was code and we were spies! My dad had a dickens of a time explaining to them that it was printouts of prime number computations from his workat the university. After many hours of interrogation they finally let us pass. We reached Lvov (Limberg) close to midnight and found our designated hotel. (To travel thru the USSR in those days you had to stay at designated hotels and were expected to arrive at a certain time. We were also issued with food  vouchers) Being so late we were offered nothing but some old cake to eat (they’d obviously heard of Marie Antoinette)  and the ‘swamp water’ as my mother called the tap water was disgusting but mixed with the dreadful Czech whiskey they’d acquired in Czechoslovakia it actually tasted not too bad. 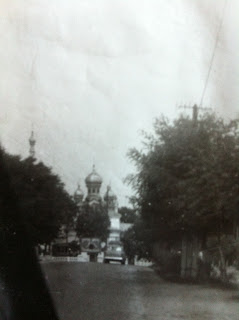 The city skyline of Kiev (population 1 million back then) was dotted with the golden spires of the Russian orthodox churches contrasting starkly to the old grandfathers in the streets pulling their carts along with docile old carthorses here I am below pictured talking to one of them with my dad). 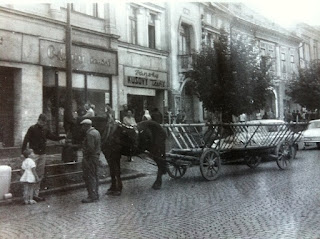 The people seemed generally happy, they had probably never had it better than at that point in time. Kiosks sold glasses of wine and of course vodka. Apparently I kept running away so frequently that my mother eventually put one of those dog leashes on me – I was four for god’s sake! At our designated hotel that had a sour faced woman sitting guard on each floor we produced our food vouchers for dinner. Naturally we had Chicken Kiev (when in Kiev...)and my dad ordered two glasses of the ubiquitous vodka and some wine, that took so long to arrive that he thought he’d better order another round as well. When the first round finally turned up it was in a karafe that held approximately four (normal 250ml) glasses worth and was 60% proof. I think my four year old self escorted my parents back to the hotel room that night! 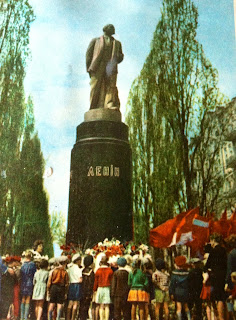 Driving thru the streets decorated with their statues to Soviet heros like Lenin, we noticed they were actually designed for trucks rather than cars to use. This meant the traffic lights were  positioned too high up on their poles for the driver of a normal sedan car to see. The sewers often had  no metal lids on them either so you had to be careful you didn’t get stuck in the sewer holes. The Rirumph got a flat tyre and there were only two repair shops in Kiev, one at either end of the city. The tyre repair man was completely gob smacked when he saw our tyre – a hitherto never before seen thing in the Soviet Union – the tubeless tyre! Because getting anything new was also next to impossible we found the repair stations would file down the teeth in old the gearboxes to fit into other makes cars that they didn’t have the parts for, in fact there were no new parts for anything so everything was remade or adapted – they were very resourceful those Soviets! Eventually they managed to adapt an inner tube to repair our tyre and we were once again on our way. Having said that though, the Rirumph was constantly breaking down and mother was forever push starting it - the Russians were remarkably non-chivalrous and never offered offered to help the pretty 22 year old, even right out the front of one of our hotels! I think in all the Rirumph had three flat tyres plus the fan belt went and my dad had to fashion a new one from one of my mothers pantyhose. 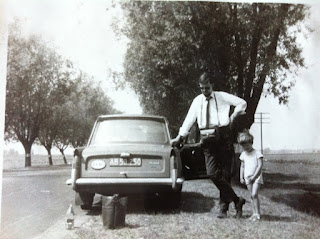 From Kiev we had wanted to go on to Minsk and Moscow but were denied passage - possibly because of the Prime number secret code spy thing ;-) so we swapped the last of our food vouchers for a wooden chess set that I still have and drove on toward Brest.  At the Polish border we were told ‘nyet!’ – we were not allowed to cross. We turned back and found another road that led to Brest. This time at the border they looked at the DK (Denmark) number plate and let us thru. Just before we got to Brest we were again stopped by another policeman and told ‘nyet!’ we couldn’t go on. My parents begged him and in the end wore him down so he said ‘Oh ok go on but if anyone asks you haven’t met me!’ The roads in Poland were fantastic compared to the Ukraine roads and we soon got to our hotel where there seemed to be a water shortage - there was only water enough for one bath.
We drove on to Krakow but our designated hotel had burnt down so we stayed privately with an old man on his acreage. He kept water rats to make fur coats from. In the morning he took me out into his yard and we picked cherries together. By the time my mother found me my face and hands were stained  red with cherry juice.  We drove on thru Gdansk to Sweden then back home to Copenhagen, carrying a fascination for all things Russian ever since - we did  stop for 6 hrs many years later in Moscow when we were flying Aeroflot (I know, we actually survived to tell the tale!) and sadly that is the closest we managed to get. Oh, and my mother has always blamed the fact that I scape the butter off my bread so there's the merest coating on our visit to Russia - food was not plentiful in the USSR and butter was always the smallest cube placed on the table for our morning rolls to be shared between the three of us! R and I are looking forward to doing the TranSiberian railway one day and there had better be samovars involved!