Easter Traditions at Our Place


Easter at our place is always greatly anticipated, particularly for the traditional Humpty Dumpty Easter eggs that are filled with smarties. This is a phone conversation with eldest daughter a week before Easter:
Vee: ‘Mum I’m sooo excited for Easter!’
Me: ‘Really darling, why’s that?’
Vee: ‘I can’t wait for my Humpty Dumpty egg!’
Eldest daughter is 21 this year! Since we moved to far north Queensland we traditionally spent Easter up the coast in the world heritage listed Daintree rainforest. There we would rent a log and canvas cabin set in the rainforest and the Easter egg hunt would take place on Easter morning in the rainforest outside the cabin, dodging the pythons, cassowary and green ants. More recently since R has been working on the Western seaboard we make the trip over to Manjimup and spend the Easter week at his little cottage hunting for eggs in the Peppermint gum fringed garden, amongst the kookaburras, magpies and wild bunnies.

This Easter one of the nurses, Barbara, called late in the afternoon and asked if anyone wanted to go for a joy ride in her hubby Simon’s plane. Yep, that would be us. As we pulled up to the gate at the little airport Simon met us there in his four-wheel drive:
‘Just make sure you close the gate after you drive through to stop the kangaroos getting onto the runway’ he said. 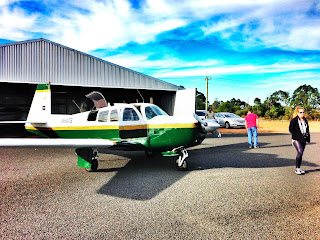 Monkeybuns and I jumped on board the little four-seater for a flight over the south-west coast.
Me: ‘That’s a lovely British racing green colour you’ve painted the plane’
Simon: ‘See the springbok painted on the tail? It’s actually what they call springbok green and gold in South Africa’
Obviously you get they’re from South Africa. When they moved out to Australia he brought a microlite plane with him but the red tape paper work required to get it registered exceeded the weight of the aircraft so he gave up and bought a light plane off a local farmer that was already registered instead! So, headphones on with voice activated mouth-pieces so we could speak to each other, Monkeybuns and I sat in the back and Simon and Gordon (the hospital administrator who also flies) piloting in the front, we taxied out along the little runway and lifted off over Manjimup, waving down to R and Lion boy who stood by the hanger down on the ground. 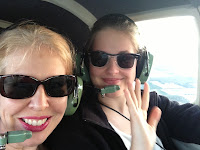 As we flew out toward the coast Simon pointed out a section of the forest below us that was covered in a long line of sand dunes, inland from the actual coast itself:
‘That’s moving sand dunes completely covering a section of that forest. In parts you can just the tips of the trees sticking up above sand.’
The westerly sea breeze had come in just as we had taken off, cooling the inland town of Manji and creating a smoky mist over the coastal areas. We flew over the mouth of the Donnelly River, closed off from the ocean until the winter rains swelled the river forcing it through the river mouth and out into the sea.
As we turned south to head down the coast we spotted a gathering of six four-wheel drive vehicles racing up steep sand dunes and speeding back down them:
Simon: ‘They’ll destroy the dune environment if they keep that up. Let’s go down and circle a few times and see if that scares them off.’
It stopped them briefly but as soon as we flew on the ratbags were back at it again! We flew over the deep blue ocean fringed with long layers of white lacy foam from layer upon layer of waves breaking along the shore. As a small island appeared below us with sparse vegetation and rocky outcrops, Simon came on over the headphones:
‘The old-timers used to put their sheep out on this island. They’d leave them out on it for six months and then come back for the survivors. That was their way of weeding out the fittest to breed up.’ 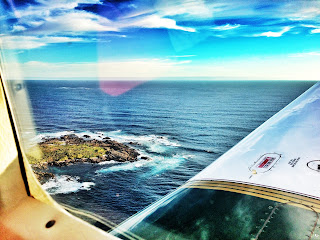 Gordon came on:
‘I used to wind board out there back in the day but you wouldn’t catch me doing it these days. Not brave enough anymore, too many sharks about for my liking!’
We circled over Windy Harbour and headed back towards Manji, flying over the hundreds of marron farms. The commercial ones have red, white or black shade cloth over them to stop the birds from pinching the marron. Up in Perth we had stopped the night with my girlfriend Therese and she had come back from the shops remarking ‘We are so putting in a dam! The marron down at the shops is $60 a kilo!’ (They’ve just bought a bush property out at Wandering and they have a natural creek meandering through it) Marron are such odd creatures. If they don’t like the dam they’re in they just get on up and walk on out of there, often walking kilometres and usually at night to another ‘better’ dam. No one knows just what makes one dam preferable to the next. 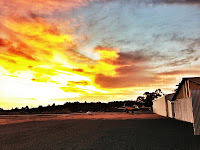 As we circled over Simon’s property, waving down to his wife Barbara, and headed for the runway for a perfectly smooth landing, we were treated to another spectacular Western Australian sunset blending in to the red of the earth. What a great Easter flight – thanks Simon! 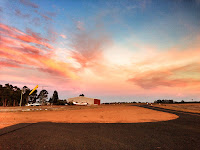 Here's a terrific video Monkeybuns made of the flight