Did You Know Mice Can Sing? And What Has This Got To Do With Being A Vegetarian

It always amazes how much we think we know only to discover there’s so much more we don’t know, just like the old pie chart: 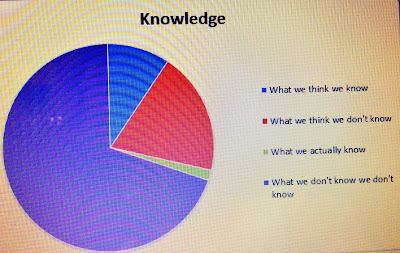 So yesterday driving along, playing ‘mum’s taxi’ for the umpteenth time, the universe took the opportunity to remind me of how much I don’t know I don’t know. I was listening to a very interesting interview on Radio National – I’ll tell you what the interview was actually on later - and I heard that scientists have discovered that mice sing.  I thought ‘What the…? Maybe it’s a metaphor for something else’, but no, it turns out mice actually really do sing. They are one of the few sentient mammals that do this – research published October 10 in the journal PLOS one showed that mice can be taught to vocalize different notes—just like humans, dolphins, whales, and a few other species.
How did they find this out? Using ultrasonic listening devices – mice sing at a frequency we humans cannot hear. Mummy mice sing their children to sleep (how adorable is that!) and male mice can be veritable Caruso’s wooing the ladies with melodies and repeated phrases that they can learn to change. Female mice will flock around a male with a particularly good singing voice.
Click here to watch and listen to a mouse singing
Scientists have known about this since 2005 but in a more study conducted in 2010 they studied what happened when two male mice of different genetic strains, one which sang tenor and the other which sang bass, were put in an enclosure with a single female for eight weeks. Rather than physically fighting each other for the female’s attention the scientists discovered that two male mice would change their songs, each imitating the higher or lower notes of the other's song. Just like humans, those boys soon changed their tune when they wanted to woo the lady. It’s possible that the mice may also sing to communicate aggression and other emotions.
Erich Jarvis, a neurobiologist at Duke University says that mice have more similarities in their vocal communication with humans than other species like our closest relatives, chimpanzees. Vocalizing happens when the brain's motor cortex, which controls voluntary muscles, tells the vocal cords in the larynx how to move. Jarvis and his scalies found a rudimentary indirect connection in mice between the motor cortex and the larynx that is absent in chimpanzees and monkeys.


So we all perceive the world in different ways and I guess the take home message here is yes, this is a Wonderland, but don’t be a Queen of Hearts – not all ways are your ways. Every species and indeed even within our own species perceives this Wonderland with a different set with a finely tuned senses and thus the world is slightly different for all of us. As writer for the Smithsonian Rob Dunn informs us: ‘Bacteria call to each other with chemicals, mosquitoes detect the carbon dioxide we exhale, ants see polarized light, turtles navigate using the earth’s magnetic field, birds see ultraviolet markings on flowers, snakes home in on the heat in a cougar’s footprint or a rabbit’s breath. Most of these different worlds are little understood because of the narrow reach of our own perceptions.’

Oh and by the way, the point of the Radio National interview was actually to discuss research that had been conducted on the effect on animal life between living a Vegetarian/Vegan lifestyle and that of being an omnivore/carnivore and it turns out that the Vegetarian/Vegan lifestyle choice actually has MORE impact on animal life! We don’t normally consider the cost to such animals as mice that are grain lovers, but maybe now we’ll all think a little differently about these surprisingly sentient animals – turns out the mice of Brambly Hedge and Stuart Little might have more basis in fact than we realised and we just need to regain some of that childhood wonder at the world.