volcanoes in the mist

The sound of the muezzin calling the faithful to second prayer from the nearest mosque saw us eating banana pancakes, a staple breakfast served to backpackers all throughout Asia. We had intended to climb the nearest volcano which sat at some 2040ft but rain and a pervading mist made it unsafe to do so. 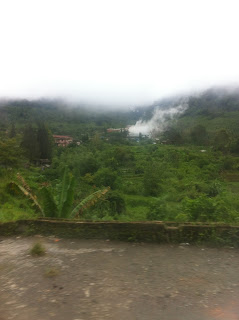 We decided instead to hail a minibus to the hot springs and soaked ourselves in the milky, sulphur laden hot water for nearly an hour, watching vents of steam erupt from the nearby hillside. I had left my silver necklace on that my girlfriend Therese  had given me for my previous birthday and as I emerged from the hot spring there was a collective gasp from the kids. 'Your necklace is black, mum!' - oh dear! Hopefully it polishes up again or I'll be in big trouble with the practical Therese for being so absent minded! We had also watched as India's nose ring morphed fascinatingly from silver to purple to blue! My gold belly ring remained gold, the alloy being minuscule enough not to precipitate in a light coating with the sulphur. We were red like lobsters which inurred us to the chilly temperature and arctic winds howling around us. 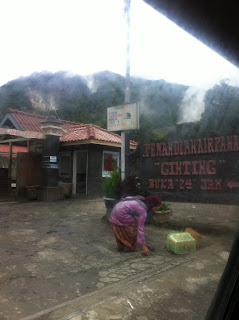 Faridah and Lise (mother) hadn't come into the hot spring because they were afraid they'd be too cold when they came out, but luckily this wasn't the case. Back at the guesthouse the car that Faridah had called to come from Medan (two hours drive away) hadn't yet turned up. She called the driver while we were packing and all of a sudden there was a great yelling down the hallway - we thought someone was being murdered but it turned out to be one very ropable Faridah in full swing! Some idiot white person had chartered the car in the meantime for more than what Faridah had negotiated and the driver didn't even bother to call her and let her know. Several phone calls later, she finally managed to summon up another vehicle to take us on into Aceh. By mid afternoon the car still hadn't turned up, it was stuck in traffic with all the holiday goers - it was a Sunday - trying to get back home. 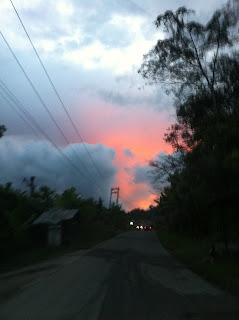 Finally, late in the afternoon our car arrived for the 10 hour journey home to Lise's house in Air Dingin, West Sumatra! As we drove through the last bit of the Provence of North Sumatra and approached the border to Aceh there was an increasing number of Christian churches, as if in defiance of the approaching fatwah on Christian churches across the border. The churches were all labelled either GBKK (Gereja Batak Christian Catholic) or GKBP (Gereja Batak Christian Protestant) and interspersed with them were mosques. As we passed thru the elephant statue at the border into Aceh there were noticeably more coffee bushes planted out. 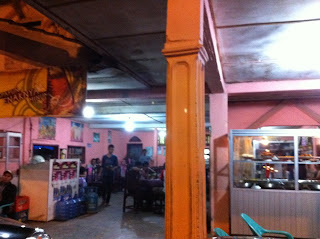 Passing thru Sibulasalam (meaning nice place to live) we looked for a roadside restaurant. Our Acehnese driver took to us to one he was familiar with and stood outside looking at the glass window full of food. We went inside and sat down then Lise said 'Well you know normally one goes up and helps oneself to whatever one wants in these Acehnese  places you know'. 'Oh!' I replied 'Buffet style, why didn't you say so!' I replied and we all stood up and filed over to the food much to the drivers relief. He thought we had sat down at the table because we didn't want to eat the food. There was selection of various fishes, kankung, rice in a gigantic rice cooker and various fried eggs, omeletes and other goodies. The food was delicious, the restaurant full of mainly men watching us curiously. 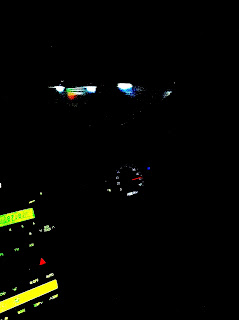 Back on the road I thought 'Gee, we seem to be racing along here!' I glanced at the speedo. It sat on 200km/hr! Holy f***! I felt like vomiting as we veered past chickens, goats and dogs, motorbikes and other cars. Later on Lise put her GPS on (yes, she's a regular Lara Croft Tomb raider and has all sorts of 'survival' gadgets) and measured the speed we were doing and we discovered the speedo was in fact faulty and we were only doing half the indicated speed. 'Does that make you feel better?' she asked. 'Oh yeah!' I replied, 'Just great!'. We finally made it to Lise and Faridahs house just after midnight.
Posted by Unknown at 07:00

Email ThisBlogThis!Share to TwitterShare to FacebookShare to Pinterest
Labels: hot springs in Sumatra, travelling through Sumatra, volcanoes in Sumatra