The Umbraphile Diaries or The Eclipse Chasers 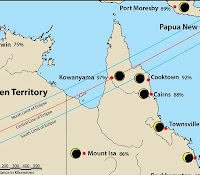 So you all know that Occy is nutty about the weirdest things, in the most endearing way of course. Well the latest nuttiness is that he has self-styled us into Umbraphiles. ‘What’s an Umbraphile’ I hear you ask. Well, it’s officially ‘one who loves eclipses, often travelling to see them’. Last year we were fortunate enough to have a total eclipse here in Cairns and we spent the night before bunking down with friends who live on the beach and having front row seats to the event the next morning. The experience was awesome – the descending quiet over the crowds and birdlife gracing the beach fringe as totality reigned was unforgettable and Occy managed to shoot off some rather good footage of the whole event if you’d like to have a look at it - 'All Expectations Totally Eclipsed'.

This week Far North Queensland was at the epicentre of yet another solar eclipse, this time an annular eclipse and the perfect place to be for four minutes something of annularity was about 450kms north of Cairns at place called Musgrave – a camping ground and not much else. So, as self-styled Umbraphiles we packed up the car with twins and camping gear and headed North onto the red dirt road.

But hang on, what’s the difference between a total solar eclipse and an annular solar eclipse I hear you ask. Well , a total eclipse is where the moon passes in front of the sun and obscures the entire sun for anywhere between few seconds to a few minutes. An annular eclipse (is not something that happens every year, that would be an annual eclipse and solar eclipses do definitely not happen every year) is where the moon covers all but a bright ring around the circumference of the sun. Solar eclipses can only occur when there is a new moon and there are also two other types of solar eclipses – partial and hybrid. A partial eclipse is obviously where the moon only crosses part of the sun surface. A hybrid eclipse, also known as annular-total eclipses, usually begin as annular, transform into total, and then revert back to annular before the end of their track. In rare instances, a hybrid eclipse may begin annular and end total, or vice versa. For more science junkie information on eclipses head over to the NASA site.

The week before our journey started Occy asked me to phone ahead to book the camping site:
‘Can you ring and book for Thursday 9th of May. It might already be booked out. There’s probably going to be hordes of eclipse nutters up there, the place’ll be swarming with them – we might not even get in!’
So I dutifully rang the Coen camping grounds:
‘Hi, is that the Coen Camping Ground?’
‘Errr, well, yeah, I suppose so, whatever’.
‘Well is it or not? We’re coming up on Thursday for the eclipse and wanted to make sure you had room’.
‘An eclipse hey? Well we aren’t normally open this time of year but I suppose we could open for ya.’
Obviously there were NOT going to be hordes of eclipse chasing nutters up there! 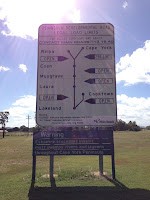 The road heading north out of Cairns is bitumen for approximately 250 kms as far as the one horse town of Laura. After that it’s red dirt and wildlife. Brahman cattle meander along the road, wild pigs as black as soot scamper away, kangaroos stop to look whose passing and crowds of crows and eagles squat by fresh road kill. 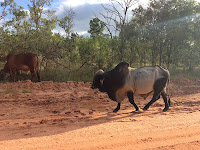 Occy stopped to let a rather large perentie (monitor lizard) pass and Lionboy said: ‘I was chased by one of those once. I was also chased by a cassowary!’ The perenties might not be more dangerous than a painful nip but cassowaries are a different matter – they can easily disembowel you with their sharp claws. 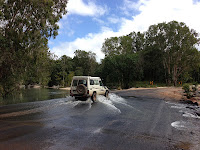 After driving thru numerous creeks overflowing across the road we reached Musgrave an hour before sunset and Monkeybuns declared that she was definitely NOT putting up a tent in the dark, which it would have been had we gone on to the old goldmining town of Coen. We surveyed the surprisingly green grass of the Musgrave roadhouse camping ground, noted there appeared to be other potential eclipse nutters encamped there and decided that this would have to be the place.
As it turned out it Musgrave had much longer annularity than Coen but for some reason hadn’t shown on the eclipse pathway map so it was serendipitous that we’d ended up there.
Tent erected, self-inflating mattresses inflating and sleeping bags rolled out, Occy fired up the barbie (that’s Aussie for BBQ) and we cooked some snaggers (sausages) and steak to have with our salad. 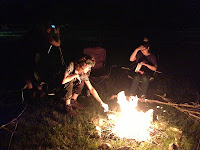 The twins organised a campfire and sat around making that disgusting infiltration from America – Smores – one simply isn’t enough! Put 2 marshmallows on the end of a long stick and hold them over the fire till they toast then pop them on a lattice biscuit with 2 pieces of chocolates and clamp the whole lot together with another biscuit and enjoy this delicious anti-Paleo treat. Meanwhile up in the heavens the Milky Way gave a spectacular display and boded well for the next morning.
Occy was up bright and early erecting his tripod along with the other nutters (about 40 in total) whilst I took the kettle off to the ladies toilets to plug into the power.

We’d bought Viet Namese individual coffee makers from Hoi An and we enjoyed a cup of freshly brewed coffee with our Paleo granola (you can watch Occy as his alter-ego ‘Dieter’ making it with Monkeybuns on her YouTube channel ThePaleoLifestyle) as we watched the moon moving into ‘first contact’ with the sun through our eclipse glasses. 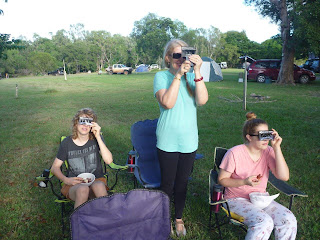 Just before annularity a bank of clouds appeared out of nowhere and swept across the sun but fortunately they became wispier as they were moved along by the wind and I managed to snap this on my iPhone.
Well pleased at another eclipse under our belts we packed up camp and headed for home.
Passing termite mounds that looked like craggy Scottish castle cliffs and delicately lily padded Billabongs, we had just come off the dirt road and onto bitumen when the car started vibrating fiercely.
Occy pulled over to check the damage – yep, a completely shredded tyre in the middle of nowhere and in the middle of the day under a burning hot sun. Never fear, umbraphiles are here! And I whipped out my trusty umbrella to shade Occy whilst he slaved over a hot jack. 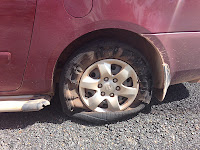 Luckily we had an emergency spare, embarrassingly plastered with yellow stickers saying ‘DO NOT EXCEED 80kms’. We pootled the rest of the way back to Cairns like we were out on a leisurely Sunday drive with other vehicles hurtling past us and the twins saying ‘Are we there yet?’.