How to Get a Sister & Brother in 10 Easy Steps


1.        You are born an only child and occasionally wonder what having a sister and brother would be like.
2.       Be careful what you wish for, you might create a self-fulfilling prophecy.
3.       Have your parents catch you unawares as you float randomly through life by separating.
4.       Get introduced over dinner to your dad’s new girlfriend.
5.       Act cool about the whole deal to show you respect your parent’s life decisions.
6.       Visit your mother who has checked herself into the funny farm for a holiday to cope with the situation.
7.       View this positively as she is learning many new painting techniques, successfully incites other interesting ‘inmates’ to ‘escape’ on day trips [they’re not supposed to leave the grounds] and learns subterfuge in subtle interrogation techniques employed by the psychiatrists – she is now ready for employment by the FBI, CIA and other international spy agencies!
8.       Have your dad marry said girlfriend – new stepmother acquired.
9.       Bonus points for new stepmother having teenage children.
10.   Acquisition of sister and brother accomplished.

So, my new brother-Kevin, and sister-Rae, were 14 and 16 respectively – I was 26. I had up until this time been the sole concern and the apple of my dad’s eye. Suddenly I had to make room for these newly acquired siblings. I wasn’t quite sure what one was supposed to do with a brother and sister but they seemed to accept me so I decided the best tactic was just to act normal and re-evaluate as required. I have to say from my perspective I thought we all got along famously. At the time I had my own Podiatry clinic down in the seacoast town of Busselton and spent three days there, then drove the three hours up to Perth to go to uni and party with friends and lived at my dad’s house for the rest of the week.
Kevin was an absolute breeze; I guess ‘laid-back’ would be the appropriate description. He had a keen interest in photography and cooking and spent his spare time making model air force aircraft that I took great delight in encouraging him to hang from his ceiling [much to stepmother’s annoyance]. He had a veritable air raid happening in his room! I really appreciated his creative talent. He also rather bizarrely got kitted up in super-muscles and went off and played American Gridiron [of all things!] on the weekends just like brothers on those American movies! He even used to annoy the shit out Rae, winding her up til she would go quite puce in the face. His nickname for her which persists to this day [they are in their thirties now] was ‘Scrotie’ – as in ‘scrotum’ which I thought was both terribly funny and terribly awful at the same time [how could a brother and sister be so mean to each other, my ignorant sole-child self wondered? Now of course they’re the best of mates and he still calls her Scrotie!] One night at the dinner table Rae was saying that she needed a tutu for her high school dance class and quick as anything Kevin quipped:
‘More like a two-two by four-four!’ [implying she was fat]
‘Muuuuum!’ Rae would squeal ‘Would you do something about him!’ Ah, it was great fun.
Rae was not an absolute breeze. At least not at certain times of the month when she would get ultra-moody and grumpy and snipe short-temperedly at everyone. I soon ascertained that she needed regular dosing with a multi vitamin B and this kept her relatively civil. On the odd occasion she would come out in the morning in ‘a mood’, I would just point to the pantry and say,
‘You haven’t taken your bitch-pills have you?’                                                                                                 At which she would look sheepish, take them and we could all continue to play happy families again.  For our first New Years together we all went down to Margaret River to stay with friends.
On the drive down I took Kevin and Rae in my 4WD and dad and stepmother followed. I had kitted our car out with water pistols and once we were hyped up enough on the coke and chocolate I had stocked in the three of us had great fun driving along ‘shooting’ at passing cars and the ‘Olds’ as Kevin called them[parents] behind us. I also admittedly managed to get the three of us lost by taking some dirt track to nowhere but at least we had supplies with us!
For New Year’s Eve I absconded with Rae to a night of wild partying with my boyfriend and his mates in the nearby town of Gracetown. They had their own band and set up in the back of a Ute that they drove around and parked in random spots and played from. 'Back at the ranch' in Gracetown, Rae got her first initiation to other people running around unselfconsciously naked.  Kevin, Rae and stepmother were of the ‘cover everything up’ party whereas my dad and I were of the ‘naked is natural’ party and the others would just have to get used to it!

In the following year the Olds   decided to go off to Europe and visit the relies, taking Kevin with them. That left Rae and I home alone….   Oh boy! I decided to act like a dog staking its territory [albeit subconsciously] but instead of pissing I re-painted the bathroom in an arty Greek blue sponge with mustard motifs. It was a surprise for when the Olds came back! Rae on the other hand decided to have a party with her girlfriends who all got terribly drunk and proceeded to throw up all over the lounge room and I proceeded to get really mad with them because they wouldn’t clean it up [they were in no state to, but never mind that!] Phone calls flew between Australia and Europe of the ‘She won’t do this!’ and ‘She’s being mean!’ variety that soon had the olds tearing their hair out. As soon as they got home – and I can tell you they were none too pleased with my ‘present’ of the bathroom – stepmother took Rae into the bedroom and gave her a lecture and my dad took me onto the back veranda and gave me a lecture. The cheek of it! Both us ended up in tears.  Stepmother and dad then went into the bedroom to debrief each other on how the lectures had gone and by the time they came back out, there Rae and I were, sitting at the kitchen table painting each other’s toenails and commiserating with each other on ‘how mean’ the Olds were! After that we got on just fine because we’d formed an alliance against the injustice of it all. I mean, the inhumanity of it all!

My dad in an effort to reconcile decided to take Rae, one of her friends and I out on his yacht for a day sail to Rottenest Island. We set of in a light breeze and slight swell that soon saw Rae turning a very interesting shade of green.
She spent the entire sail glued to the floor of the foredeck, finally falling asleep after hours of misery. We finally made landfall, wait, what? Crikey, we’d run aground at Rottenest! Adversity is the best breeding ground for forming strong bonds in a relationship, particularly when it’s life-threatening as we girls surely thought it was – I mean, never mind the fact that we could actually stand in the water we’d run aground on – as far as we were concerned this was it, the boat was going to sink and we were all going to die!
We tried getting onto the other side of the rail and leaning our combined weight over the side to dislodge the boat but it was no use. We three girls decided we’d get in the dinghy and try to pull the boat off but only ended up rowing around in circles collapsed in a fit of laughter. 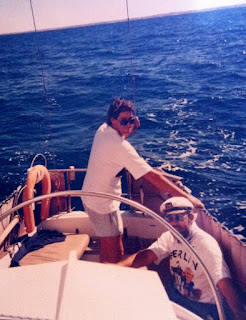 There was much eye-rolling performed by the captain (shown above) who had remained calm throughout the whole life-threatening ordeal. Obviously the only thing to do was to row ashore and go to the pub. This served a number of purposes;
1) lay in supplies of beer in case we were marooned for a long time
2) ring the wicked stepmother (as my dad jokingly refers to her) and let her know we would be slightly delayed in our return home
3) Solicit help from another yachty to haul us off the sandbar we’d run aground on
As it turned out we had to wait to till the tide came in and with the assistance of a powerboat we could be hauled off the offending sandbar and sail home on a midnight run. It’s fun having brothers and sisters isn’t it!??
Posted by Unknown at 11:51