A Dog the Size of a Small Horse

One day stepmother had to go in to hospital to have her appendix out. She came home the following day and was put to bed and told to rest. At night time we would sometimes watch a movie together and on this particular night, stepmother being laid up in bed, had decided to watch Turner & Hooch with my dad, the movie with the big sloppy St Bernard. Imagine the look of shocked surprise on their faces when R & I struggled into their bedroom with the big sofa from the living room.
‘What on earth are you doing?’ my dad asked.
‘You’re being very selfish and unsociable!!’ I exclaimed, ‘We’ve come to keep you company!’
I thought we were being very kind and considerate; it didn’t even cross my mind that they might actually want to watch a movie alone! Anyways, that movie spelt trouble of the big, hairy, slobbering kind because not long after someone spotted an ad in the paper for a St Bernard that needed a home.
‘Oh it’s one of those dogs from the movie we watched the other night when you guys invaded our bedroom! We’ll just go and have a little look at it’, my dad said, and he and Kevin took off.
‘Take Rae and follow them,’ stepmother said ‘The pair of them are hopeless, you two go and make sure they don’t come back with a dog!’ Rae and I jumped in my 4WD and gave chase ‘Follow that car!’ we yelled swerving in and out of lanes keeping a surveillance on the other car like a pair of spies.
Rae and I waited in reconnaissance position outside the dog house until my dad came back out. Walking up to our car he said, ‘What are you two doing here?’
‘Kay sent us to make sure you didn’t come home with a dog’, I replied
My dad just rolled his eyes, sniffed and said, ‘Girls, you better go on ahead and warn the War Office so she doesn’t get too much of a shock.’
Rae and I looked at each other – uh oh! We’d only just finished announcing the imminent arrival of one slobbering but cute canine when the boys rolled into the driveway with said pooch – Ben. He leapt out of the car, the size of a small horse. Now for someone I have never ever, ever heard swear before, Kay took one look at him and said, ‘Fuck, he’s big!’ 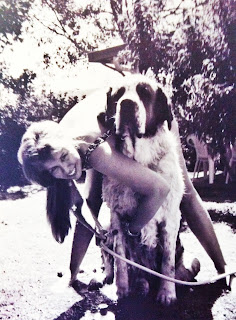 Ben soon settled into the family and everyone learnt to keep a permanent slobber cloth on hand – talk about drool! Rae and Kevin added a permanent sentence to their repertoire 'Ma! Ben's Drooling on me again! Get it off!' He also needed a lot of walking being so big and one day I decided to walk him to the local park as we had done many times before. The two of us sat on the grassy banks near the creek and I proceeded to read my book with Ben ambling around me. I finished my chapter and looked around, something was missing. Oh, the dog! Where the hell was the dog? I ran up and down the creek calling him but to no avail. Bloody hell, where could he be? It was starting to get dark so I thought I’d better go back home, fess up that I’d lost half a horse and enlist some help in looking for him. I got to the lights at the intersection of the main highway we had to cross to get back home and there was Ben, sitting patiently waiting to cross. When I got back home and spilt the beans about what had happened my dad said, “What? How can you ‘loose’ a dog that big?’
Not long after this, Perth experienced a severe storm. My dad sent me down to where the boat was moored to check on it and I took Ben along with me. To get to the boat in its pen we had to walk through a security gate and along a long jetty first. Ben came thru the gate with me and trotted along behind me. The winds were still very strong and I had to lean into them. Suddenly I heard a loud splash. I looked back and there was no Ben. I peered over the side of the jetty and there he was, swimming to shore with a rather startled look on his face – the wind had blown him off the jetty! 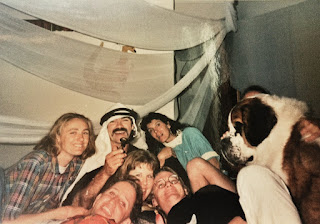 Later in the year I had a harem party for my birthday and some friends had come up from Margaret River for it. We had a mass sleepover in the harem tent. Now, my friend Nikki & Barry had brought their little boy Jarrad with them (my fairy godchild) who had just turned 2. In the morning as everyone else slumbered on in the wake of the copious amounts of imbibing that had occurred the night before, little Jarrad woke up and looking around him spied a willing accomplice in the slobbering Ben. The pair of them decided they would go for a walk! Eventually the rest of us woke up Nikki suddenly realised Jarrad was missing. Everyone was frantic. Scouting parties were dispatched. The news came back that several people in the neighbourhood had seen a small boy walking with a very large dog. Then, calm as anything Jarrad comes ambling back in thru the front door of the house holding on to Ben’s collar. It turned out they had taken a walk around a few blocks and the nature reserve and Ben had duly brought him home again once he’d had enough of a walk!
Posted by Unknown at 06:00