We arrived in Medan, north Sumatra on the Air Asia flight from Penang -late in the morning to be greeted by mother and Faridah and promptly whisked off in a four wheel drive they'd hired. This was to take us to Bohorok, Bukit Lawang where the Orang Utan rehabilitation centre sits at the foothills of the mountain chain running down the centre of Sumatra, Indonesia's largest island. (First daughter second daughter and third daughter) were relieved we weren't spending the night in Medan at the 'paedophile' hotel as second daughter India calls it. This is the hotel Sakia that we'd stayed at on a previous visit to Medan because mother always stays there, a very cheap $7pn hotel that sits next to a mosque and has delightful views over the cemetery but creepy looking single men staying there. Regarding the cemetery mother informed us that actually one can tell the difference between the men and women's graves in a Moslem cemetery by looking at the headstones. The women's headstones are slimmer and smaller and the men's thicker, wider and taller. We stopped at a halal restaurant (Faridah being Moslem refuses to eat anywhere that might even have had a pig carried past it) called Bukit Tinggi, which of course served delicious Padang food. 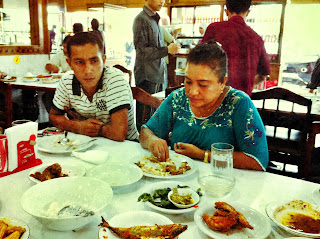 Padang is a town near the city of Bukit Tinggi in south of Sumatra wch makes a particularly spicy and delicious type of food enjoyed by most Indonesians. We tried to trick Young son Torsten into having what looked like stomach but worse it was actually beef skin cooked in a yummy sauce - that would have to be worse than the German eisbein which also wobbles on the plate with it thick layer of fat. India being vegetarian was treated to curried Jack fruit which has a delicious meaty texture. Our thirst was quenched with tree tomatoe  and star fruit juices. As we continued on the traffic in Medan was atrocious! Apparently according to mother it's never that bad. I sat in the front next to driver and was amazed to find that I was fairly immune to the crazy drivers after many years of experience driving in Asia. Only once did I become slightly concerned when I spotted several drums painted blue and white arranged down the middle of the road with the word hati hati, meaning take care, and the picture of what looked like an elderly alien painted on them. At the sight of the these the driver promptly sped up and overtook all the traffic in front of us - on the wrong side of the road! Finally out of the urban centre we sped for the next two hours thru palm oil plantations and rubber plantations, past motorbikes laden heavy with overhanging wads of green grass destined for the owners buffalos, family of five on motorbikes and water buffalos roaming nonchalantly by the side of the road. Torsten was particularly impressed by the number of boys aged 12 and up riding motorbikes whilst I marveled at a young mother who rode with one hand whilst clutching her baby in slendang (a strip of cloth tied around the body) in the other. Finally we made it to our destination but unbeknownst to us more hair raising perambulation lay ahead. 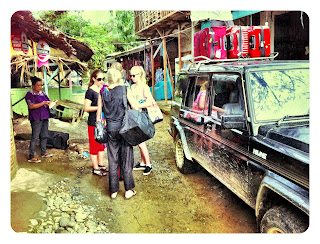 We poured out of the jeep, stretched our legs and grabbed our suitcases and proceeded to walk a ways along a path running by the fast flowing rapids of a river. A rope bridge with a few planks to walk on was suspended across the river and we needed to cross it to get to our hotel. My life flashed before my eyes - well at least that moment in my life when I had been 8 months pregnant and trying to cross a similar but one plank rope bridge in the tree canopy of Borneo. I was happy to cross this bridge now not being pregnant but the kids refused to cross it with their suitcases so we hired some men to carry them across. Faridah nearly had a fit over the amount they charged - 50 000 Rupiah ($5)! - per suitcase!!! 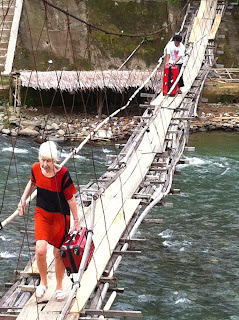 Our hotel was a single story cottage room overlooking the river. Our bathroom annoyingly held a western style toilet but with no flush (we prefer the squat especially if you're just using water and no loo paper it's much easier and your bum gets much cleaner than smearing the poo around with loo paper). It had a mandi - a large container of cold water which you then use a scoop to pour water over yourself and wash, very refreshing on a hot day and oddly enough a basin that was set at knee height and had a tap that didn't work. Apart from that the room large and furnished in bamboo. It even had a television for decoration (it didn't work - but getting Internet on the phone was no problem!) We retired early to prepare for our trek to the Orang Utans the next morning (see post 'Trekking the Orang Utans').
Posted by Unknown at 22:33