My mother decided that we should go to Tangkahan from Bohorok, deep in the jungle where they run elephant patrols to into the forest to monitor illegal logging activity. The price of a battered old jeep and it's pubescent driver was negotiated for 800 000 rupiah (about $90 at the time), our glossy red suitcases strapped to its roof and launched onto an 'unofficial road'. Savannah and Faridah being the shortest were squashed in the backseat with the lowest ceiling space. Torsten was jammed in the middle section with India and mother against a wooden board where the window had been. The padding on the seats had long since ceased to exist and mother declared that she would have been better off having a bicycle seat to sit on than the board that was left of the seat. Relief was acheived every time bounced over another rock or pothole and our bums became temporarily weightless before shifting into a new postion. For almost four hours we drove at such a speed that had it been any slower we would have been going in reverse! The dirt road was pitted with potholes full with water from the monsoon rains of the night before. Palm oil plantations leased by Malaysia accompanied us for many kilometers. We slipped and slid down steep hills to crawl painfully up the next one. Suddenly, in the middle of nowhere literally, we came across an enormous factory, sitting in the middle of the palm oil plantations for the express purpose of extracting the oil from the palm fruit. Discarded mounds of already processed husks lay along the side of the road. According to Faridah who knows all about anything edible or medicinal in the jungle, a special type of mushroom grows in these mounds which is particularly delicious. We drove past clusters of houses and huts along the way, presumably housing the palm oil workers families. The poorer people have wooden houses with thatch or tin roofs and those with a little bit more have cement houses with tin roofs. However, nearly everyone has a mesh satellite dish. In fact the majority of Indonesians had satellite dishes pulling in tv stations from arzound the world a decade before Australians even vaguely thought about getting the inferior small white solid dish satellites which even now are not so common. We were also surprised to find perfect mobile phone reception in the middle of the jungle despite the absence of electricity. Finally we reached Tangkahan. An old rusted out bus sat in front of the official lodge, wires hanging out of the steering column, seats spilling foam padding. It was actually still in commision and used as a shuttle to Medan! Whenever we arrive somewhere people immediately start talking to us in halting English only to be completely surprised when mother starts prattling with Faridah (who speaks no English) in Bahasa Indonesian. I studied Indonesian at school for two years but in between visits my Indonesian gets very rusty. Unperturbed Faridah fires away at a million miles an hour in Indonesian to me I really have to pull my socks up and remember long forgotten words if I'm to communicate with her. The great advantage of having two fluent Indonesian speakers who live here is that we never get ripped off or charged tourist prices although someplaces will try it on only to be met with 'the wrath and scorn of Faridah'. Whenever she's angry with someone because they're asking too high a price we can tell because the words shoot out of her mouth like a machine gun firing at the enemy and I think 'Wrath and scorn! Those poor people have no idea what they're up against'. Anyways, we registered with the officials and then proceeded to head down to yet another river where a raft was tied up. 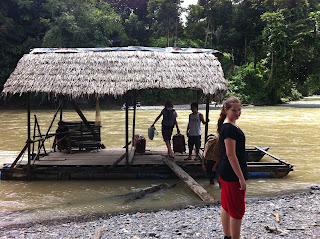 We walked across a wooden plank onto the raft while some boys loaded our luggage on. The current was strong and the pilot pulled the raft across the on a rope strung between the two shorelines. Lucky for us we hadn't come the day before, the rope had broken and the only other couple staying there had had to swim across the river to get to the huts! We climbed to steep hillside  next to the river and sat down in an roofed eating area for some lunch. Faridah started talking to the locals about the plan ts growing around and how to cook them. Apparently they didn't know a lot of them could be eaten so busied herself collecting and cooking them for our dinner, instructing the locals as she went. We were given three huts with balconies overlooking the rushing river. Hot and sticky from the long drive we went down to the river for a swim. Crossing the strong current to the far shore we discovered a hot spring oozing between the rocks from a nearby volcano. Refreshed we went back to our huts. With no electricity and only a  jungle vista for miles around I imagined myself in a Somerset Maugham novel, sipping on a gin & tonic declaring 'purely for medicinal purposes old chap! The quinine in the tonic is good for the malaria!'  as I watched the river flowing past far down below and listened to the thunder and incessant monsoon rains. (I will update this post with photos when I can access proper Internet).
Posted by Unknown at 08:00