Washing the Elephants in Sumatra 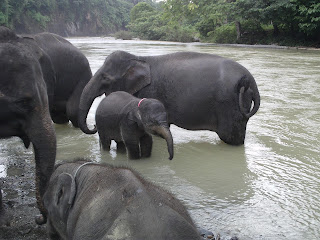 The night had been cold and the rain relentless. Sleeping under mosquito nets we only had sheets to cover us so we kept our clothes on for extra warmth. 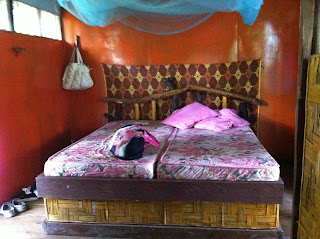 Clothes we'd washed the day before would take days to dry in this weather.  After a breakfast of nasi goreng and strong kopi (coffee) Andreas, a German  friend of mother and Faridahs living part of the year in Tangkahan came to see us. Word had gotten round on the jungle drums. He took us down to the river and we waded along to a splendid waterfall. 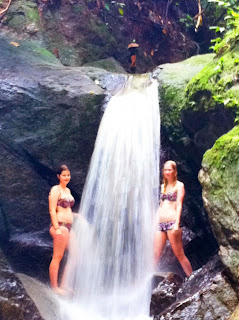 The river here is totally pebble bottomed so I was feeling rather smug aout being the only one to bring crocs along - no sore feet for me! For future reference the two most useful pieces of footwear to have on this trip would be crocs and trekking sandals. 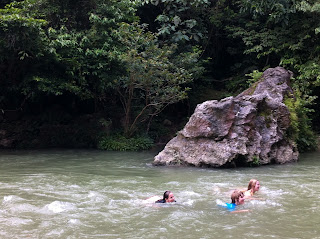 Then we slogged back thru a really strong current to get to the other side where the volcanic spring came out, heating the water deliciously and stinking of sulphur. 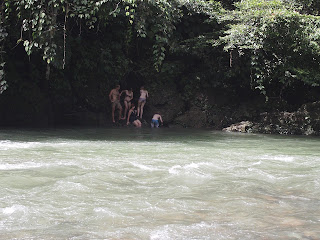 Andreas invited us to his house for coffee so we tried to get to it across the river but the river had risen in the night and the current threatened to pull us under - maybe if I wasn't carting my iPhone back and forth across the river all the time it would of been fine if we got a dunking crossing but we judged it too risky so we went up and thru the forest. 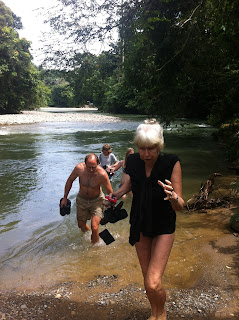 A vague path thru the forest eventually led to a rather large and astonishing house perched on the edge of a cliff overlooking the river. He spoke about how difficult it was to get any consistent work out of the local Karo people with their natural inclination toward idleness. He was also very carefully not to leave anything outside if he wasn't at home due to the native inclination to permanently 'borrow' things. We talked about the earthquake a few days ago and the odd behavior of the animals in the ocean over in Penang. What were the family of otters doing in the ocean? Apparently a few days later dolphins were spotted in the same area not normally native to those waters. Where had they come from and why had they deserted their natural habitats? Was their migration linked to the earthquake? During the tsunami the preceding earthquake had release hot muddy water up from the magma layer in the earths crust, heating the water and making it black. A lot of the bodies that had been found in Banda Aceh had been half boiled.
In the afternoon we walked several kilometers to meet a group of elephants having their afternoon bath. Before they were allowed into the water the four adults had to poo. Their mahouts helped them out by sticking their hands into the elephants bottoms up to their elbows and pulling clumps of elephant poo out. 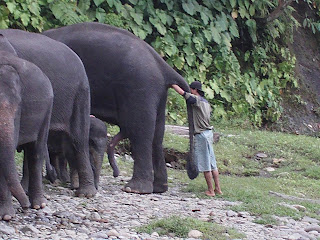 This completed the adult elephants and three baby elephants got into the river for a bathe. One of the elephants was pregnant, the gestation period for an elephanis being 22 months. There was one bull amongst the female with lovely large tusks an astonishingly long purplish penis. 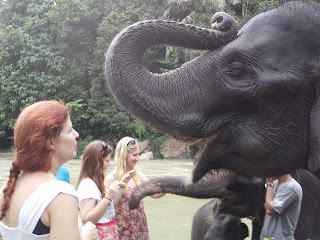 A couple of the adults came over to us and lay down on their sides waiting for us, scrubbing brushes in hand, to give their thick skins a good scrub. Afterwards we delighted in poking delicious bananas into their mouths, their thick pink tongues smooth as an eel against our fingers. Any fallen bananas accidentally dropped were picked up with the trunk, the sand rubbed off first along the upper ridges of the trunk before being deposited into the mouth. The baby elephants were still awkward in their trunk manipulations . One baby was very naughty and not only tried to undo Torsten's shoelaces but also delighted in trying to push people over. The pip squeak only came up to our waists! 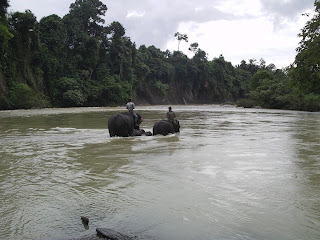 The bathing over we rafted back down river to our huts, bumping over rushes of white water, our bottoms sitting in water we spotted monkeys in the trees glaring at us. 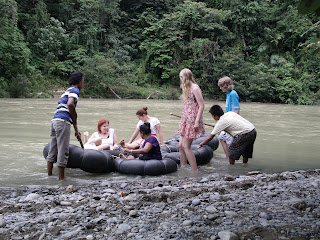 Women and children crouched at the rivers edge washing their clothes on the river stones. It's the custom to spread the washing out over bushes to dry because the surface area exposed to the sun is much greater and hence the clothes will dry faster. In the evening we ate rice and banana flower that had been cooked into a mild curry. Sitting on our balcony overlooking the river and jungle we watched a massive front approaching and discussed the possibility of being stranded here by flooding the next day.
Posted by Unknown at 08:00