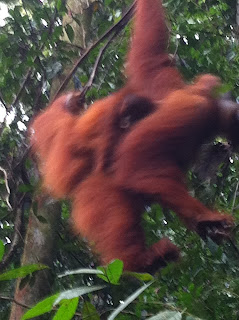 Sleeping in the hotel on our first night in Bohorok, Bukit Lewang, where the Orang Utan rehabilitation centre is in Leusa national park, I woke up at 1am. I lit another mosquito coil which would help slightly against the relentless onslaught of ferocious mozzies and went back to sleep. I must have dropped into a deep sleep because at 1.37am there was a massive earthquake - 7.6 on the richter scale, it's epicenter just out from my mothers place on the west coast of northern Sumatra.  Shortly after there was an aftershock 204km down, something most unusual was going on! Mother and Faridah both noticed their bed shaking as the rest of us slept peacefully on. In the morning mother was really pissed off that she wasn't back at her house on the coast. "Damn it! We haven't had a really good earthquake in ages and here we are miles away from it! That little shake of the bed last night was so boring!" she protested. We were up early to set off on our trek thru the jungle to get to the Orang Utan feeding station, hopefully to catch the first lot of apes as they came in from the forest. The afternoon before had been black with heavy rain clouds and sure enough they had deposited their burden during the night, making the steep track up the mountain dangerously slippery with thick yellowish mud. 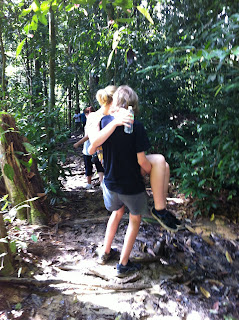 Arriving puffing and panting at the top we were greeted by a crashing sound through the tree canopy and down swung a mother and her baby, quickly followed by several other mothers and a few lone apes. 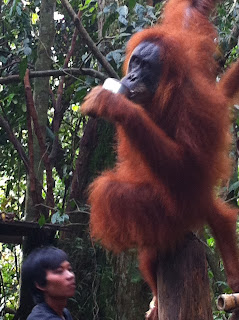 The Orang Utans (which means person of the forest in Bahasa Indonesian) are only fed bananas as a supplement to the food they already harvest from their natural habitat. We were astonished to see that they also drank greedily from mugs filled with fresh water. The babies were agile climbers and one in particular left its mother to show of its skills to us, wiping around trunks and dropping to neighboring vines before scooting rapidly back up to its mother when it got too close to us. The centre had been established in the seventies by two Swiss girls to rehabilitate Orang Utans Back into the wild who had been orphaned or kept as pets until they got past the cute stage and became too big for their owners to handle. My mother had visited the centre in '77 when there was just a single hut to stay in and the only food available had been rice and fern shoots. Trekking back to our hotel thru the jungle we took a different path and climbed another two mountains on the way. 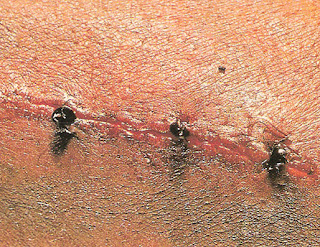 Image coutersy of http://animalshelpheal.blogspot.com.au
Leeches clung to us, rivulets of blood running down our legs when we pulled them off. We came across those rather enormous ant whose pincers are used to seal a cut instead of sutures. The procedure is to hold the body of the ant, place it's head and thus the pincers on either side of the open wound and allow the ant to bite, or grab hold of each side of the wound with its pincers then swiftly removed the body from the head thus leaving the pincers and head intact to seal of the wound.The result looks rather like when R uses the staple gun to seal a wound instead of stitches. 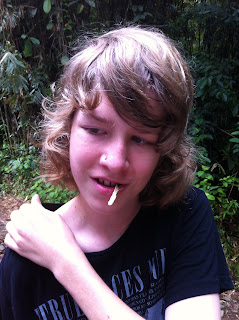 We also came across a tree whose bark our guide peeled off and made Young son and I chew. We both had colds and the bitter bark was a cure all. In fact it was so potent that the plant was becoming rare as it is harvested and sold commercially for its effectiveness, particularly for fatigue. 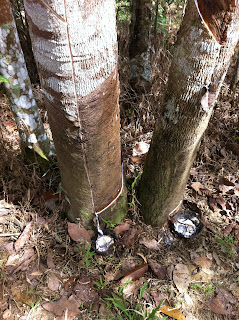 As we approached the village we walked thru rubber plantations and cocoa pods hung thick from their trees. The rubber trees leaned waiting to set down new roots as they searched for water - they are known as they walking trees. Tired from our 4 hr trek over death defying terrain the kids hired tyres and floated down the rapids of the river outside our hotel. 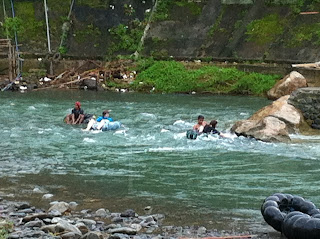