Time Travelling to the Karo Tribe


In Ethiopia they use a calendar based on the Coptic Egyptian calendar rather than the Gregorian calendar that we in the west use. This calendar moves slightly slower than the Gregorian and allows for 13 months in the year – the 13th month having only 5 or 6 days in it, but nonetheless allowing the Ethiopian tourism industry to advertise ’Come to Ethiopia where we have 13 months of sunshine’.  I call this calendar the antiageing calendar because it is also seven years slower. This technically makes me 43 not 50, therefore NOT middle-aged and Not eligible for any, oh so considerate, ‘seniors’ benefits! They exploit this well with the slogan – ‘Seven years younger in Ethiopia!’  Technically this means you can leave your home town on the 3rd of December 2013 and arrive in Addis Ababa on the 4th of December 2006, having effectively travelled back in time!

If this hasn’t amazed you enough you can be further astounded by the fact that in Ethiopia they tell time differently! We have Orop time (Europe time) and Ethiopia has Habbishat time. It’s quite logical really - the clock, which is a 12 hour clock, starts at sunrise (this varies little in timing during the year and is usually at 6am, sunset being at 6pm). Therefore, logically, the first hour of the ‘day’ – our 6am- is 12 o’clock, 7am is 1 o’clock and so on until it gets to 6pm when its 12 o’clock again. Why do we start our day at midnight anyway? Next time you want to ‘miss’ an appointment with a less than desirable friend at say 1pm, just send them a text at 7pm and say, ‘I’m here, its 1pm Habbishat time, where r u?’
Anyways, having confirmed with our guide that we would be leaving at 7 the next day and was that 7 in the morning or 1 or really 1 in the afternoon which was 7? – we set out to find the Karo tribe. We had already been travelling for 3 days and this day was another road from hell. 65km’s across three river beds later, we finally arrived at the Karo village, perched on an escarpment overlooking the serpentine Omo river. This river irrigates crops of maize and sorghum planted close to its banks. 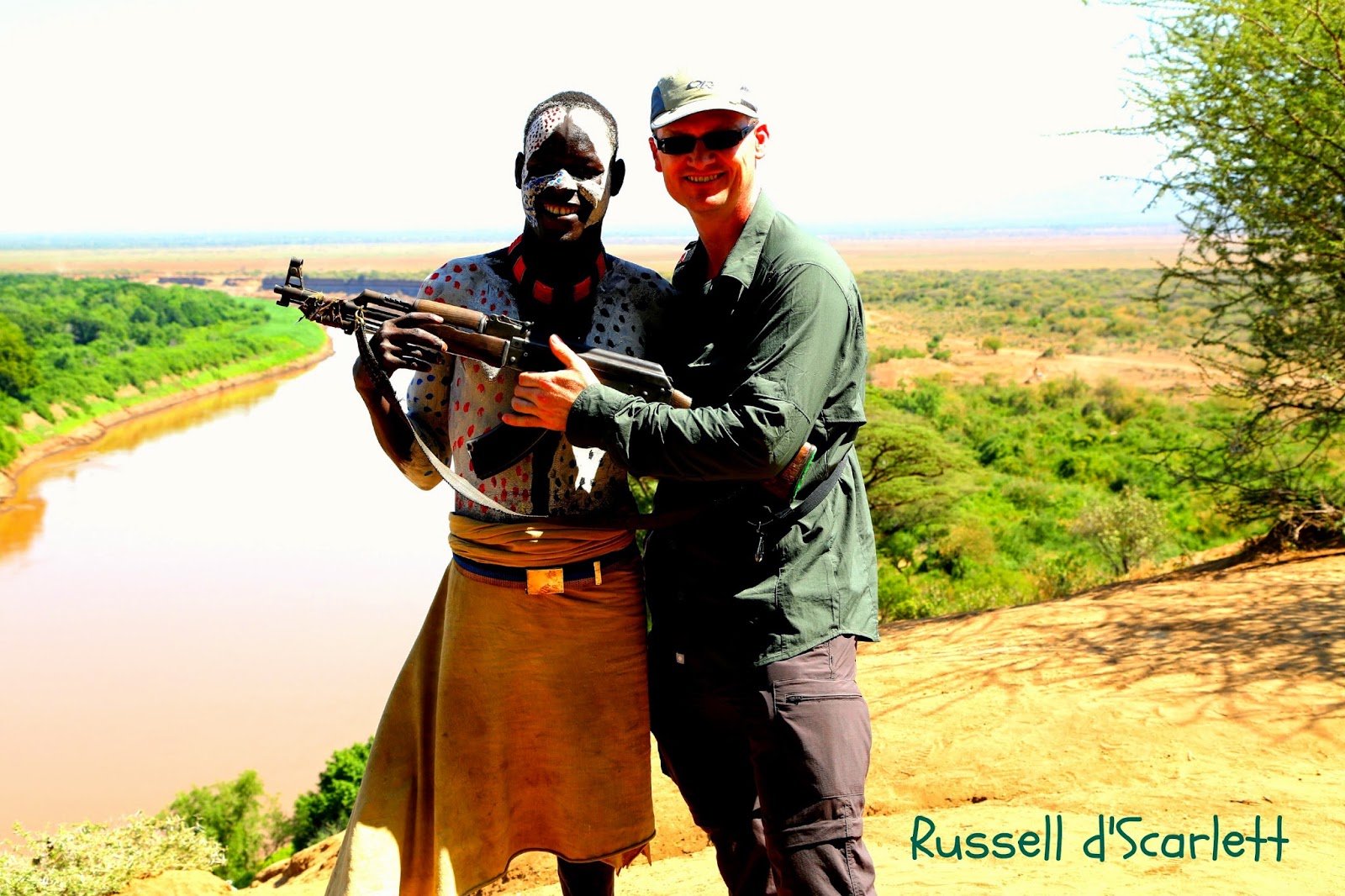 Grass conical shaped huts lay sprinkled across the dry, red earth. A group of five or six men stood under a singular acacia tree awaiting our arrival with Kalashnikovs slung casually over their shoulders. We pulled our two 4WDs up in a cloud of dust and got out to greet them. The men have a unique way of greeting whereby they shake hands whilst simultaneously bumping opposite shoulders together. Indil-cat declared she felt faint as soon as she got out of the vehicle, so we left her under the shade of the acacia tree and went off to explore the village, meeting the individual members of the tribe. It was incredibly hot and it wasn’t too long before one of the men came up to tell us the Cat had fainted. We rushed back to the acacia tree to find her laid out flat with a woman cooling her down by splashing water over her face. After she’d downed a litre of water she felt better and got up to shoot Polaroids of the children. She gave them their photos and watched their amazed little faces as they looked upon their image captured on a piece of paper.


Every Karo family owns two houses: the Ono, the principal living room of the family, and the Gappa, the centre of several household activities. The Karo are renowned for their elaborate hairstyles of red ochre and animal fat, similar to the Hamer tribe who they share lineage with and intermarry, put together in elaborate styles. Body paint is drawn with ochre, white chalk, yellow mineral rock, charcoal, and red iron ore. The men make a part from one ear to the other, pulling the front section into braids, framing the forehead. The rest of the hair is drawn back into a bun and held firmly by a colourful cap of glazed earth that can take three days to construct. This can be painted in various colours or into which pieces of bark and  ostrich feathers are attached. A man wearing a grey and red-ochre clay hair bun with an Ostrich feather indicates that he has bravely killed an enemy from another tribe or a dangerous animal, such as a lion or a leopard. It is usually remade every three to six months, and can be worn for a period of up to one year after the kill. 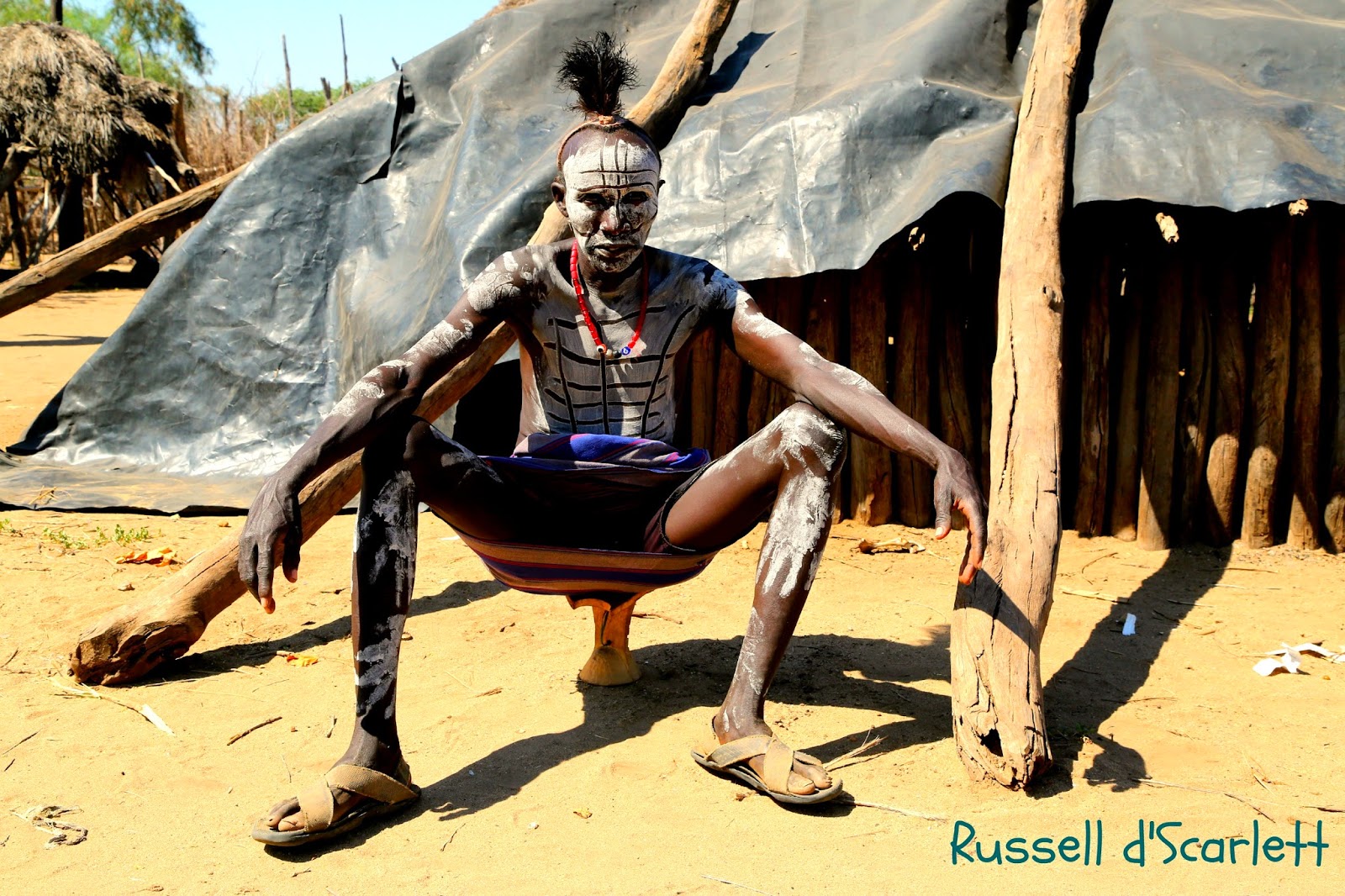 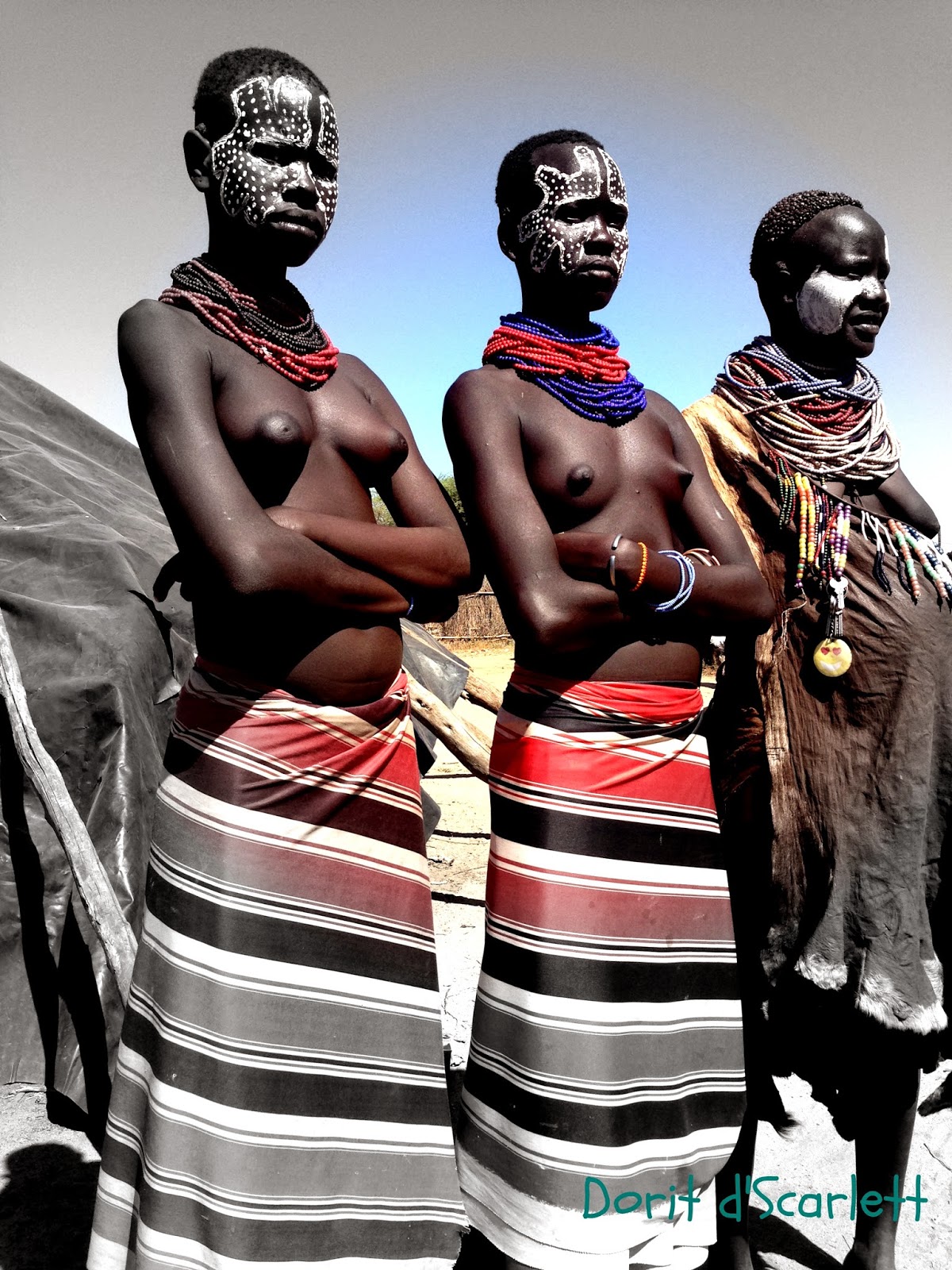 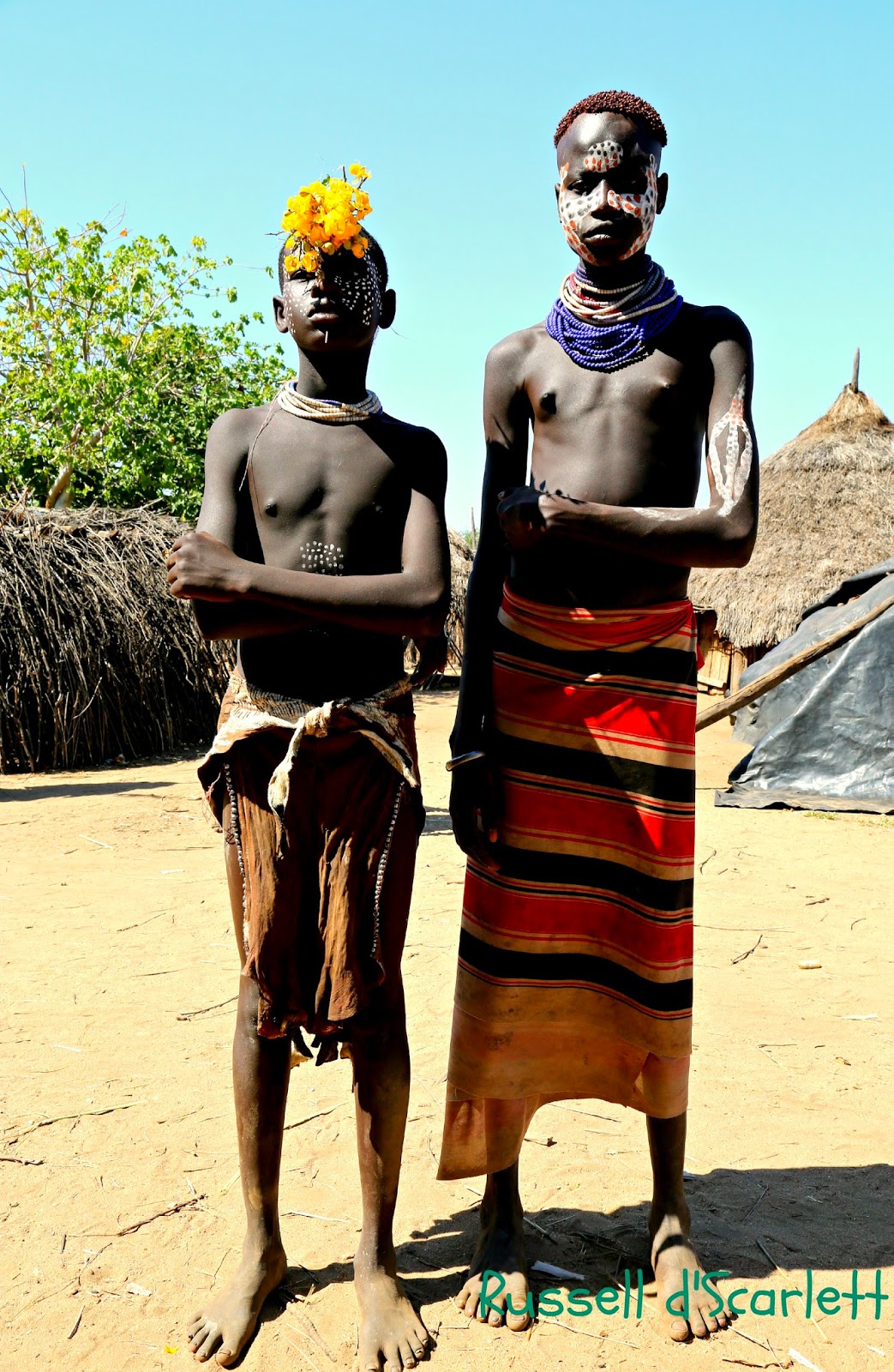 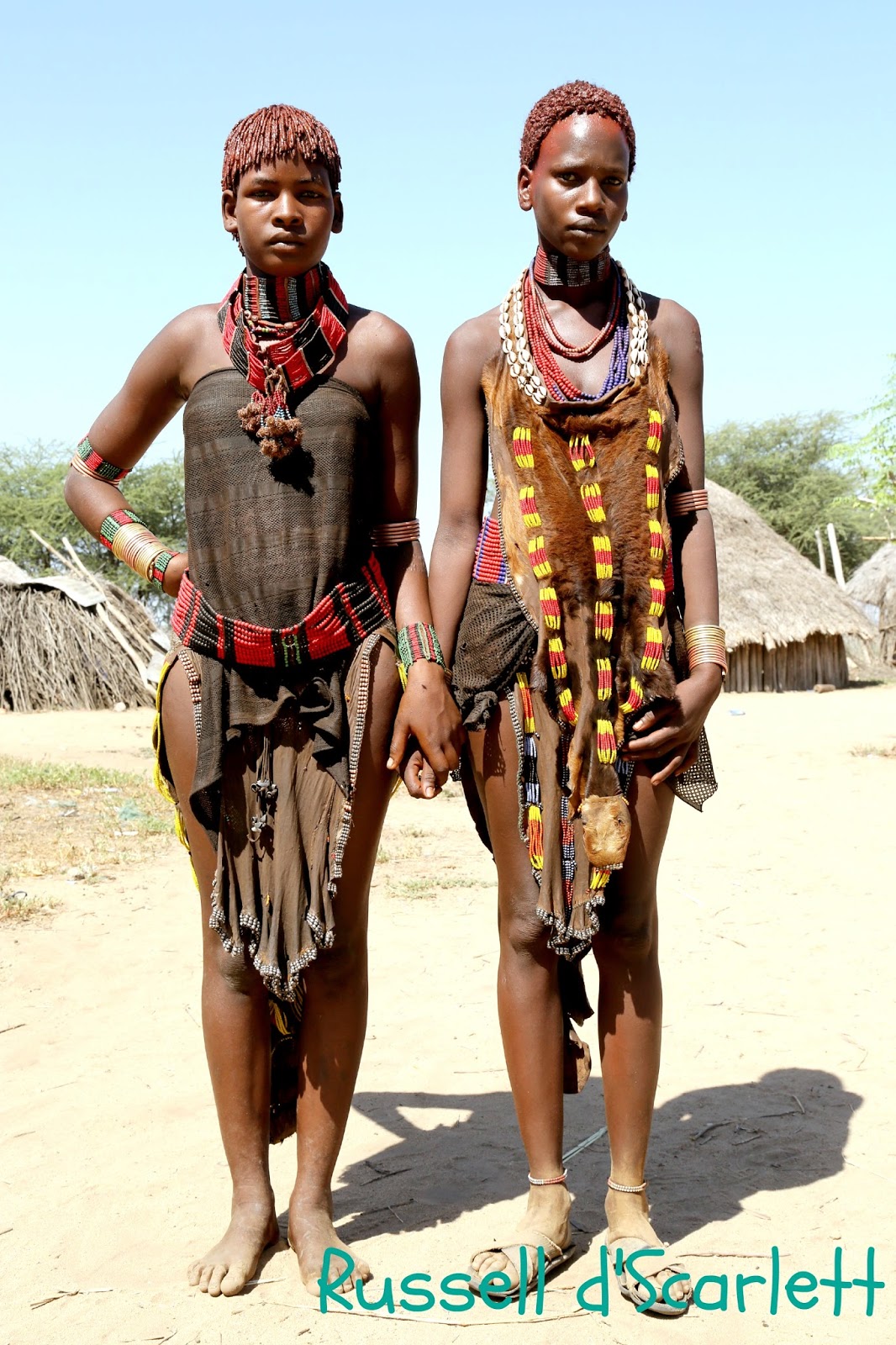 They wear goatskin loincloths decorated with elaborate beads and sometimes tiny shells they have traded for and the women are considered particularly beautiful the deeper their chest scarification's are. Some of the men had painted their bodies white which made them look fierce. The Karo men cover their body and face with ashes mixed with fat as a symbol of virility. Scars across their chests are a symbol of having performed a major kill, either of an enemy from another tribe or of a large animal. They offered Occy 100 goats and 1 Kalashnikov (this is more valuable than the 100 goats and is also worth one leopard skin) for Monkeybuns which he politely declined saying she was already promised to another who had offered 200 camels and 2 Kalashnikovs! They sagely nodded their heads in acquiescence of this greater offer. A man in the tribe can have as many wives as he wants, but must be able to afford them.  Most men will only marry two or three. The end of the Mengistu reign in the 1990s and ongoing conflict in Sudan and Somalia means there has been an influx of left over AK-47′s, Kalashnikovs and G-3 rifles. Look at this photo of us (minus the Cat who was still under the acacia tree feeling dodgy) with some of the Karo men - don't we look like white worms that haven't ever seen the sun! 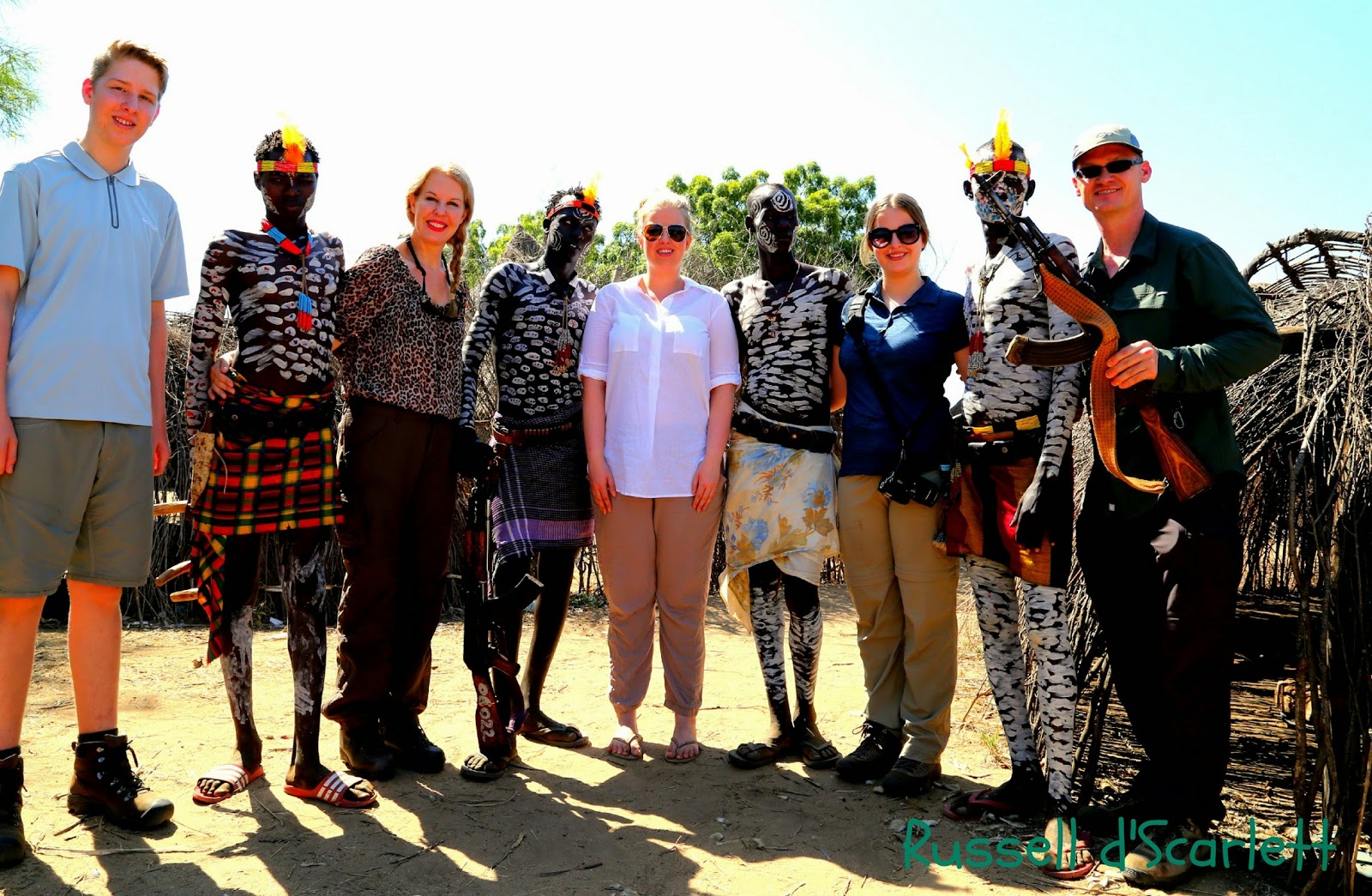