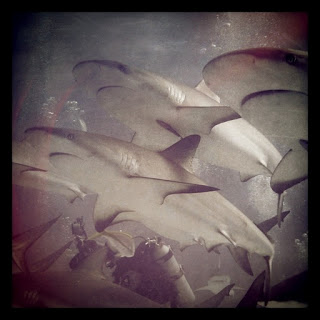 One of the aspects of diving that freaks most newbies out is dadun .... dadun ... dundundundundun - yes, that's right, JAWS! A few years ago now all six of us certified as divers and I can still remember being slightly paranoid about the sharks, particularly on that first night dive when I was positive the ferocious beasts were lurking in the darkness. Several years and many dives later we found ourselves in the Bahamas on Valetines day, which also happens to be R's birthday (R took the photo above). He wanted to go diving with the sharks. Ok, so that's fine for the two of us but was I really doing the right thing insisting our four children also come and offer themselves up as potential shark bait? 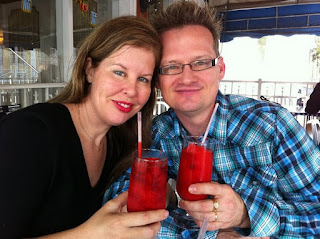 We had a few blood coloured cocktails and pondered the question of responsible parenting. I'm glad to say that as usual, living life in all it's experiences outweighed the cottonwool theory. 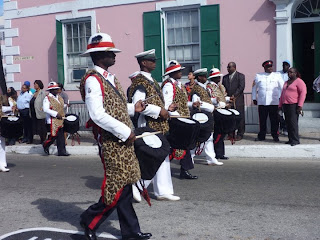 As we reached this momentous decision the Bahaman Police band came marching down the main street of Nassau - it was a funeral march! The bishop of Nassau had died.  In Feng Shui they say that if one of your pets dies it is replacing the death of one of your family members. Well I claimed the bishop as my pet and took the poor chaps funeral as a good omen! 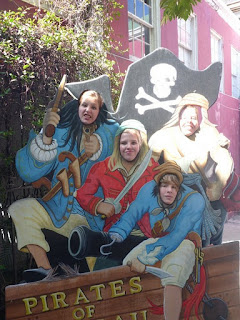 To steel our courage we went off to the pirate museum  where replica pirate ships and fascinating accounts of the famous pirates like Blackbeard who had made the Bahamas their home were displayed. Henry Morgan led many successful raids including one on Panama city which earned the pirate a knighthood! One of his favourite hunting grounds was around the island of Andros where he would hang a lantern to lure unsuspecing ship onto the reef. The bluff is named in his honour - Morgans Bluff. Another pirate, William Catt is said to have buried his treasure in one of the many caverns on Cat island, named after him. Of particular interest to the feminists out there is the all female crew of The Shark Lady who would take to the sea topless. 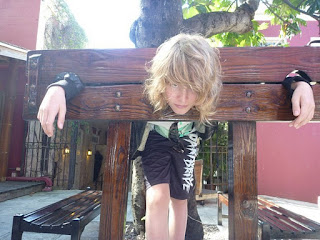 After some time in the stocks contemplating our fate we swaggered off to meet the sharks that awaited those who had to walk the plank. 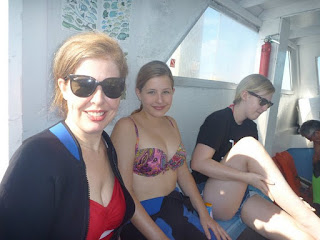 During our briefing we were warned to keep our hands tucked under our arms or into our weight belts. Once there's food floating around its easy for the sharks to mistake fingers and hands flapping around for a chunk of free meat. Meanwhile, the diver who was feeding the sharks to lure them in got totally kitted out in chain mail, which was reassuring. All I could think was if one of my children came up minus one hand I'd never forgive myself. 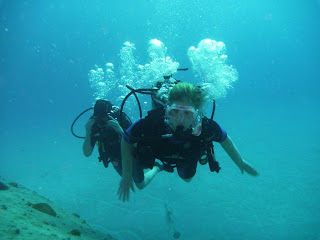 This is first daughter diving down, she's a bit of an arm flapper so she was the one I was most concerned about. She was also the one who really didn't want to go and needed a push in direction of one more life experience. Thank christ she remembered to keep her hands tucked in! 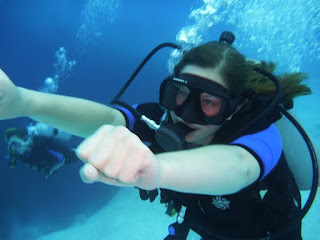 This is third daughter, fearless, she thinks she's superman. 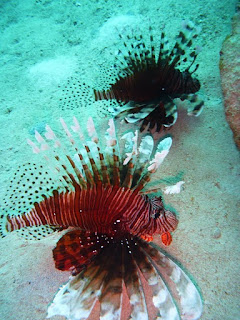 There were tons of lion fish (these critters are deadly poisonous! 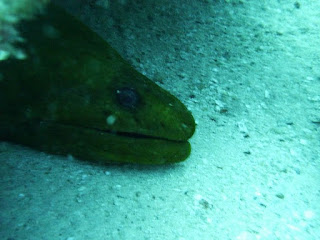 And so many moray eels we became quite blase about them! 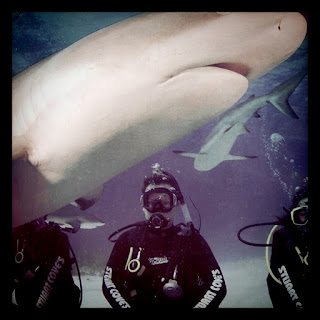 Finally as we sat on the bottom the chain mailed shark feeder released the bloody meat and 50 sharks made a bee line for it. As they swam in around us one of them knocked my mask with its tail. My eyes went wide as I calculated at lightning speed how to replace it without exposing my fingers. I slide my hand up my chest, pulled my mask back into place then quickly slid it back into my weight belt. The feeder swam off with the last little bit of meat to lure the sharks away and we slowly made our way back to surface amongst a few curious sharks who still lurked around us. Yay! The kids were exhilarated at having lived the diving with sharks experience AND they still had all ten fingers and toes!
Posted by Unknown at 09:36