The Long Way to the Fistula Hospital 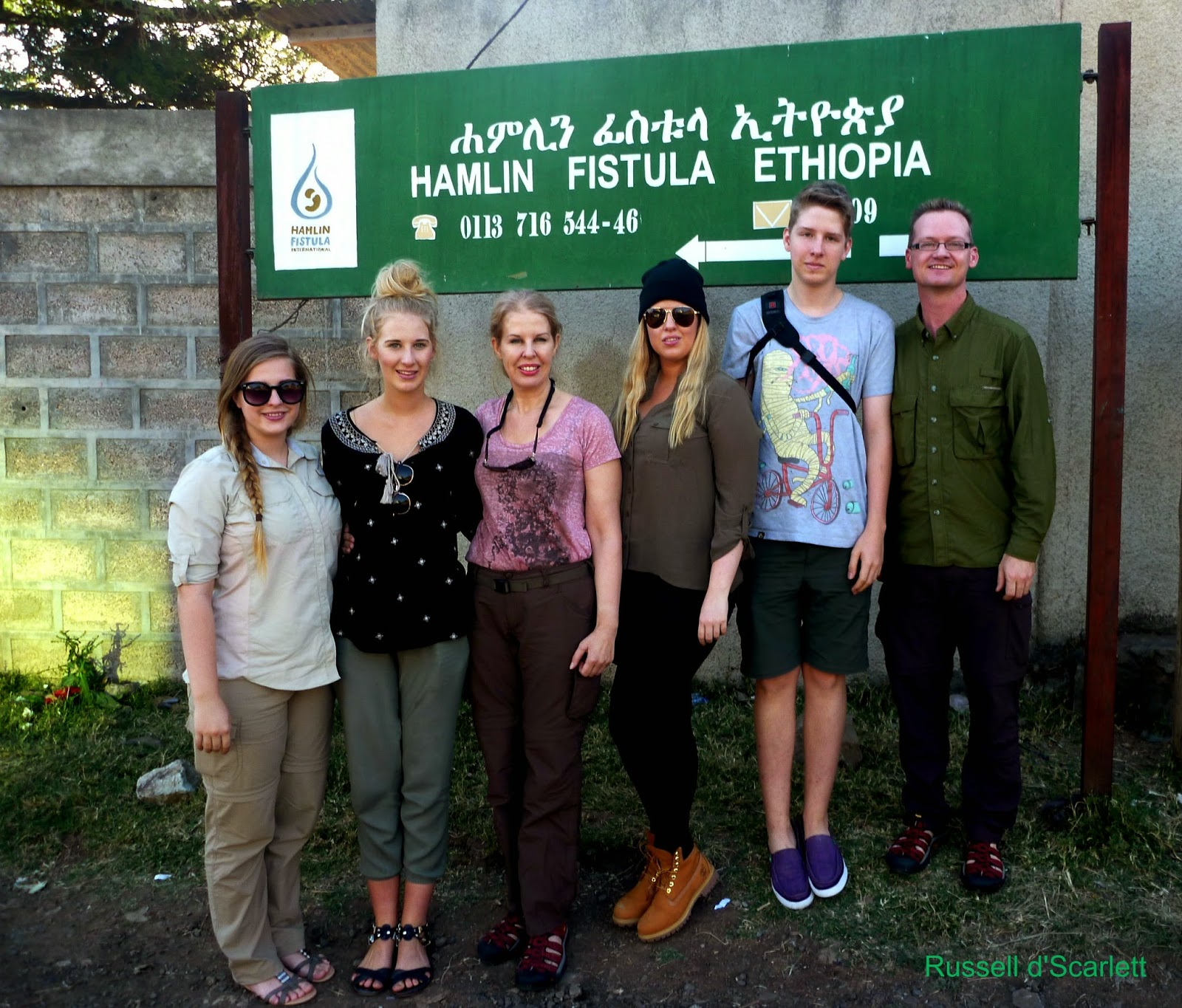 In which we make our way to the Fistula Hospital with a suitcase full of bras:-
Having had many previous experiences with shipping packages to Mother Teresa’s Leprosarium on the outskirts of Calcutta (Kolkata) and mysteriously disappearing to line the pockets of customs officials, I thought I would employ a strategic move and bring my ‘package’ with me for the Fistula Hospital in Addis Ababa. The ‘package’ consisted of a suitcase full of bras kindly donated by the lovely women of Cairns for the wondeful women attending the Fistula Hospital. Bras you might ask? Isn’t that the wrong end of the body? Well, after the women afflicted with a fistula have been successfully operated on and recovered they are usually able to return to their villages and take up normal lives and relationships. The Fistula Hospital encourages these women to return to the hospital if and when they are ready to give birth to their first child in order to be safely delivered and avoid any risk of a second fistula through obstructed labour. These women will sometimes have breast/nipple issues that require dressings and hence the need for bras to keep them in place easily.
Anyways, Occy and I had arrived in Addis on a cold afternoon and managed to nearly get ourselves evicted before even stepping foot outside the airport. At the security screening we put our suitcases and bags thru the x-ray machine and the heavily armed security officer started gesticulating wildly to Occy and demanding to see inside his camera bag. Occy unzipped the bag and the officer said, ‘What is this? What is this?’ pointing to his super doper telescopic lens – you know, the sort men get when they reach a mid-life crisis but are in denial about it, yet you can tell because they start buying stuff that symbolises the enormity of their penises.
‘Well that’s just my camera gear, you know for photographs,’ says Occy to the officer. The officer points an accusing finger at him and states, doesn’t suggest or ask mind you, but states as if it’s an obvious known fact, ‘You are a photojournalist, this is not allowed to come in, I must take this!’ Uh oh! This could end badly, I was thinking to myself – I’ve seen Occy in challenging confrontations with pseudo-authority figures before and he doesn’t take too well to it. To my utter astonishment in a rare turn of events Occy actually decided to try being diplomatic instead of incensed. ‘No, no, no,’ he said to the officer, ‘I’m not a photojournalist, I’m a doctor, this is just for taking holiday photos!’
‘Doctor?’ the officer asks, ‘Which hospital are you working at, where is your work visa?’
Oh dear! ‘No, no, no,’ replies Occy, ‘I am not working here, I work in Australia, I am just here for a holiday.’ ‘Huh!’ the officer grunted then rounded on me. ‘This is your suitcase?’ he asked me, pointing to a large red suitcase.
‘Yes,’ I replied.
‘There are many things in here shaped like this,’ he said, drawing a U-shaped curve in the air with his finger. ‘What are they?’
‘Oh, they’re bras for the Fistula Hospital,’ I replied.
‘Bras? What is ‘bras’,’ he asked in a voice that implied that it was clear to him that we were both up to no good and I was probably carrying a shipment of secret weapons. I cupped my breasts with my hands and jiggled them up and down at which I’m sad to report that he got completely the wrong idea and eyes nearly popping out of his head, screamed, ‘What! What is this you do?’
I quickly flicked the bra strap out from under my shirt and showed him that instead, repeating, ‘Bra!’
Recognition finally dawned on him and he looked at both of us disgustedly and waved his hands, shooing us away with a ‘Go, just go!’ We scampered out of there as fast as we could, astonished that we had managed to retain both the camera equipment and the offending suitcase full of bras.
On the appointed day that we were to visit the Fistula Hospital we lugged the suitcase full of bras into our 4WD and directed the driver to proceed to the Fistula Hospital.
‘First I must show you something,’ he cried, ‘then we will go to the Fistula Hospital!’ The something turned out to be Emperor Haile Selassie’s cathedral and tomb which Lion-boy was keen to see. Having travelled thru many Muslim countries, we had heard what we took to be the usual call to prayer by the muezzin, but it in fact turned out to be the call to prayer for the Christian church, the method of worship blurring the lines between the two distinct religions.  Magnificent stained glass windows depict scenes from the Old and New Testament. - an Adam and Eve stand under an apple tree accompanied by an ostrich and a lion – how quintessentially African! 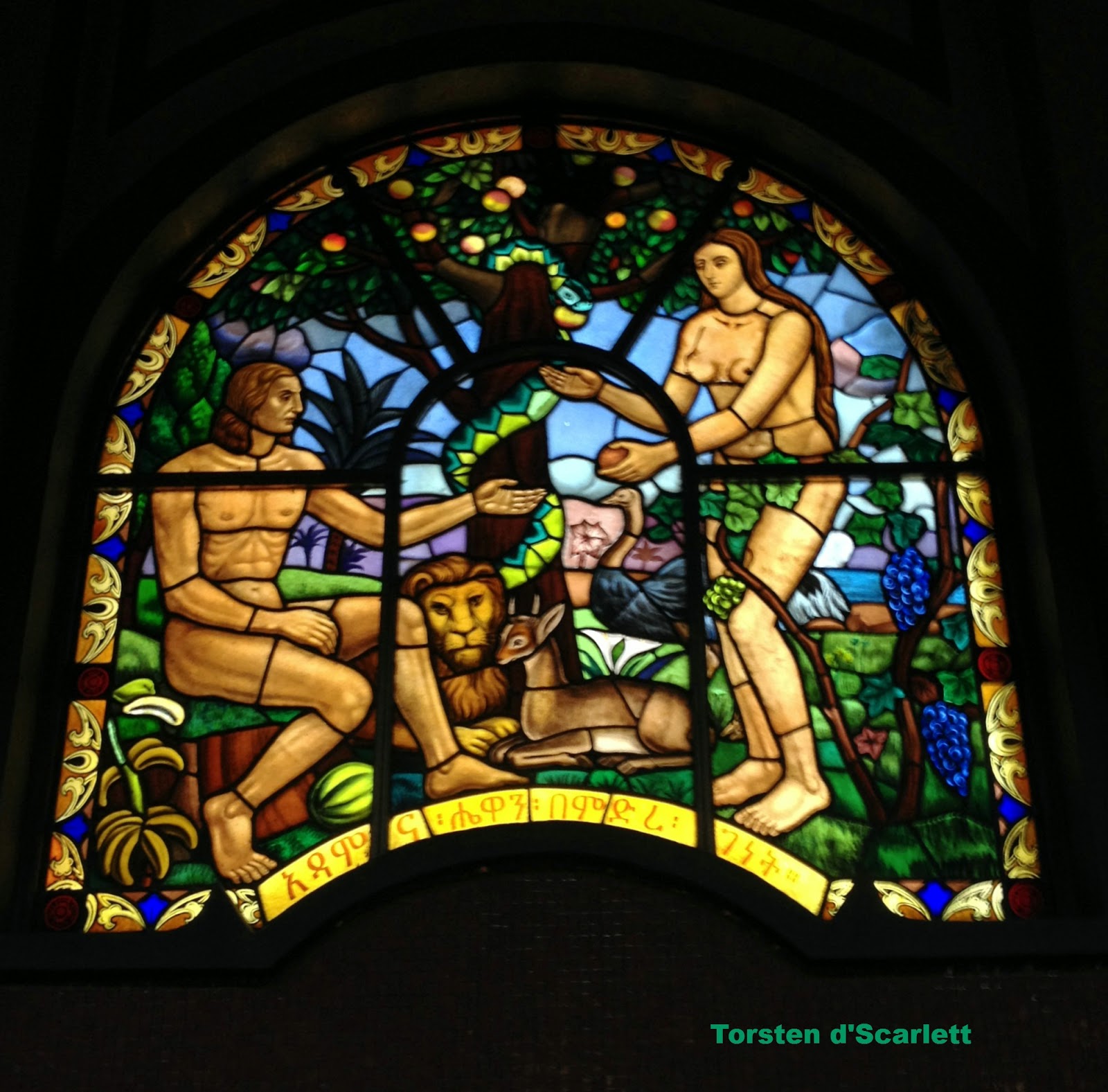 Women in white muslin dresses and shawls floated in through the ‘women’s’ door like so many ethereal beings in search of a pew from which to worship. 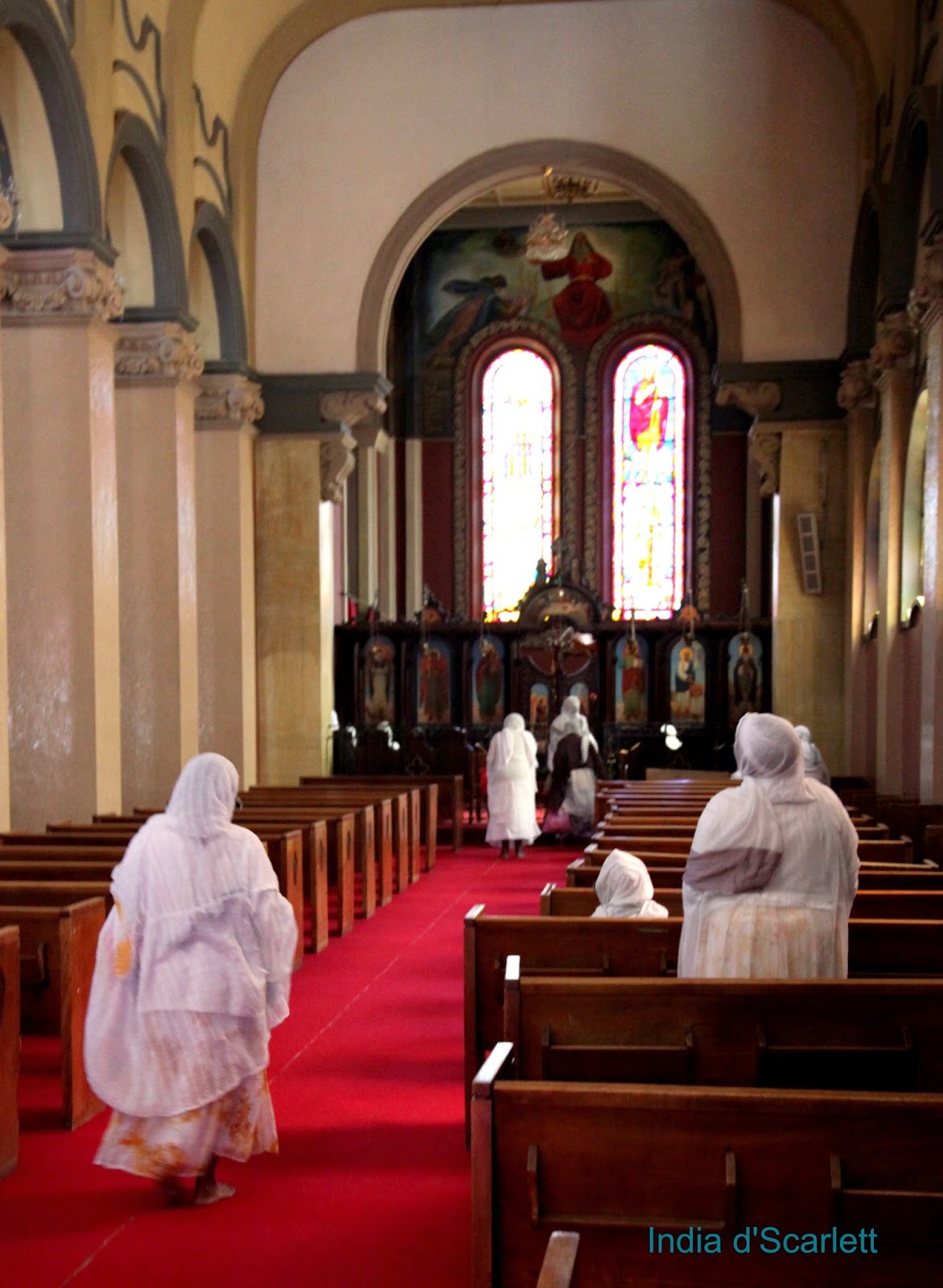 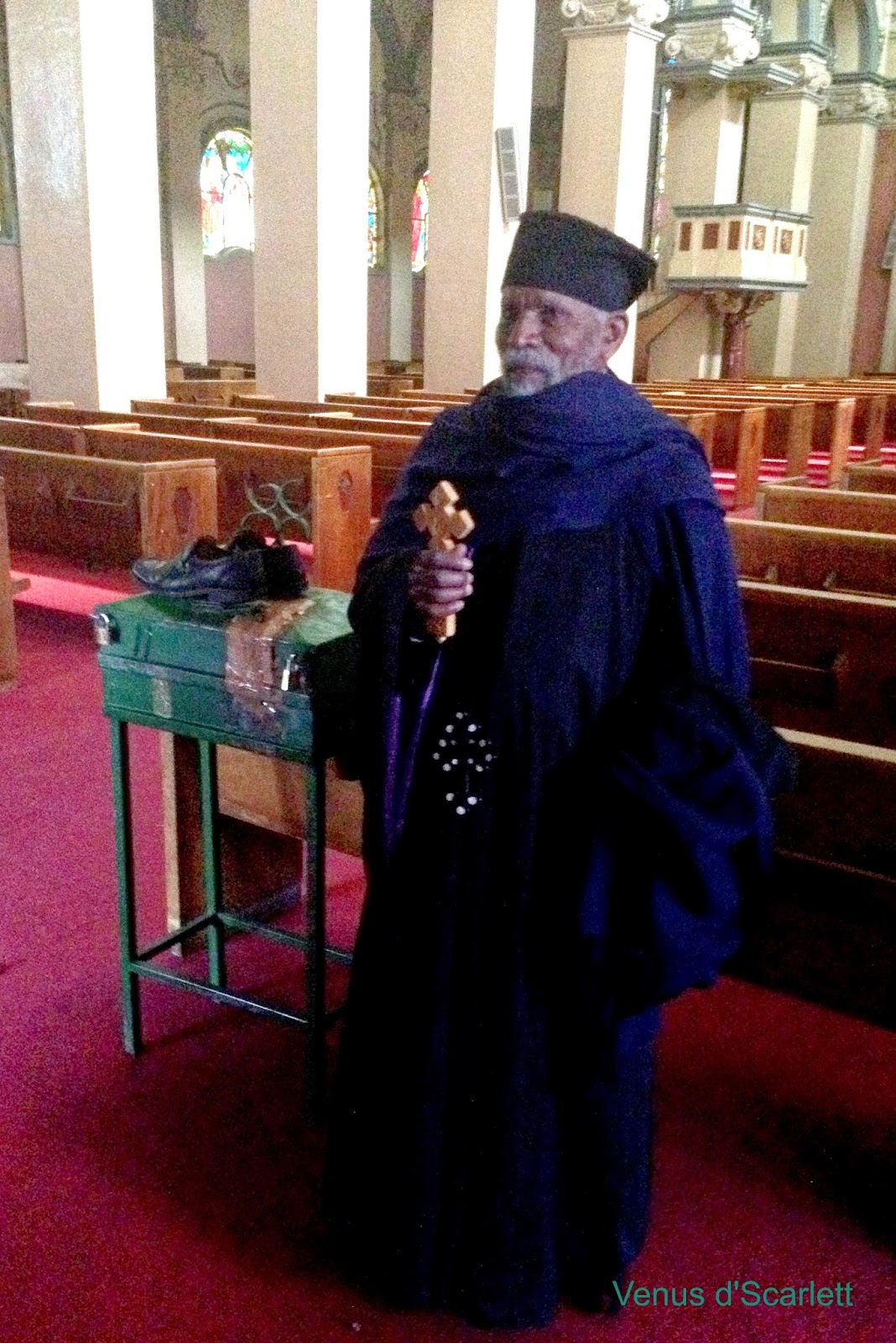 A black garbed Coptic priest presented himself to us, offering for us to take his photo then promptly presented his hand for payment. Outside in the sunshine men kneel and pray, then rise and kiss the wall of the cathedral before prostrating themselves again. A mention of the Rastafarians triggers my memory – there was a connection with Emperor Haile Selassie but I couldn’t quite remember what it was. Later Indil-cat recounted that the Rastafari movement had started in Jamaica in the 1930’s revering Haile Selassie as the returned messiah largely due to the fact that he was crowned Emperor shortly after Marcus Garvey’s prophecy ‘Look to Africa where a black king shall be crowned, he shall be the redeemer.’  The Rastafarians believed that God himself was black as stated in Jeremiah 8:21 ‘For the hurt of the daughter of my people am I hurt; I am black; as astonishment hath taken hold of me.’ 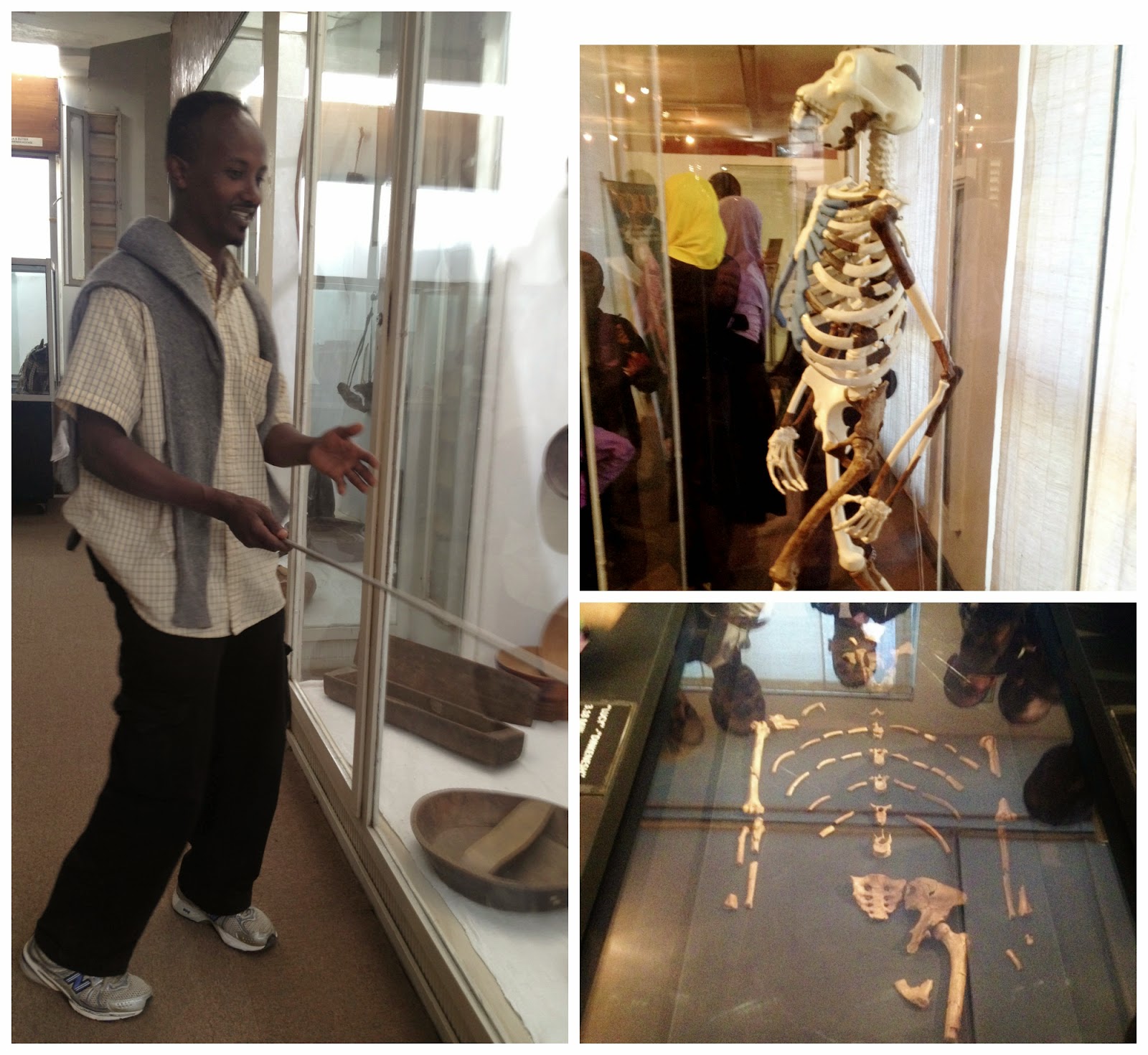 Haile Selassie’s lineage can be traced back to King Solomon and the Queen of Sheba. When he was crowned, the King of England, considered by many to be the most powerful and important man in the world, could not attend but sent instead the Duke of Gloucester who, upon meeting the emperor bowed to him revealing that the new emperor was more important than the most important man in the world!We finally left the historic cathedral and thought we would now proceed to the hospital. Well, that’s what thought did! Our driver had other ideas and insisted he take us to the National Museum where an anthropologist took it upon himself to show us through to the archaeological digs section and where the original ‘Lucy’ bones discovered by Leakey are housed. A collection of skulls dating back some 5 million years revealed excessively flat molars, the reason? Even back then they chewed chat or khat! I’d recently watched the film Captain Phillips so I knew that khat was a flowering plant native to the Horn of Africa that was chewed by the Somali pirates. Khat causes excitement, loss of appetite (god, I should have been chewing it!) and euphoria and gives the pirates false courage for a raid. We did later manage to get hold of some for curiosity’s sake as we descended into the Omo Valley and it was being sold by the roadside but can’t really say we noticed much of anything, probably due to the fact that it tends to work on a slightly cumulative basis. By the time we were finished with our anthropology lessons at the National Museum we were starting to wonder whether we’d ever get to Fistula Hospital and we were in fact getting quite desperate and paranoid even. Did the driver have something against the Fistula Hospital? Did he know something we didn’t? Was he deliberately trying to keep us away from the hospital? In the end it turned out that he just didn’t know where the Fistula Hospital was and was embarrassed to say! We wound our way up and down cobbled streets, in and out of the merkato thru goats and donkeys and people and back around the way we’d come until eventually we arrived at the gates of the Fistula Hospital. We almost cried with relief we were so happy to see it. Big signs and the presence of security officers at the gate warned that the taking of photos was strictly prohibited so there would only be verbal documentation of our visit. It also stated visiting hours were strictly Tuesdays and Saturday 1-2pm only with no exceptions! It was a Friday. Undeterred Occy put on his best ‘doctor persona’ (you know, the one where they exhibit signs of a God-complex and act all omniscient & omnipotent and basically bluff their way into getting whatever they want) He wound down his window and said imperiously to the security as if he would brook no argument, ‘I’m Doctor Russell d’Scarlett, this is my family, we have come all the way from Australia and we are carrying supplies for the hospital’ – thankfully failing to mention the ‘supplies’ were a suitcase full of bras! Nek Minnit we were issued security lanyards and ushered through to see matron. We had missed Catherine Hamlin by a few days; she had had to go to England on family matters so we had an appointment with the 2CEO. The grounds were beautiful, most of the gardens having been planted by Catherine Hamlin herself over the years, they were lush and green and cool. 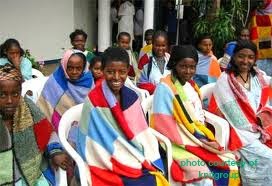 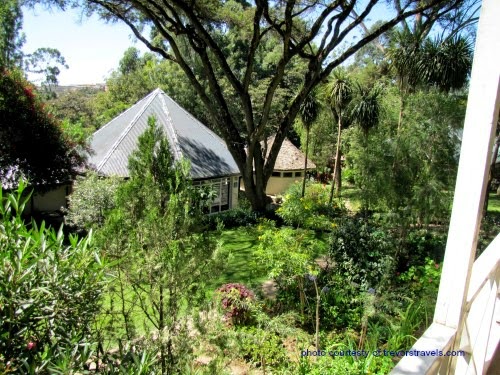 We passed a group of women waiting outside a clinic and even though we had spoken to the children about fistulas and what the consequences of a fistula was (leaking urine and or faces uncontrollably) Lion-boy suddenly gasped at the strong odour and exclaimed, ‘What’s that smell?!’ Horrified, both Occy and I squeaked out, ‘Shhh! It’s the smell of urine because the poor girls have no control over their urine leaking – they are probably waiting to be assessed for operations to fix that.’
We eventually found our way into matron’s office and spent the rest of the afternoon at the hospital with her discussing the success, evolution and current needs of the hospital. It now had a staff of 500 that included 5 outreach hospitals each with 5 satellite clinics lying close to the Ethiopian borders. Each clinic had a trained fistula midwife excepting 8 of the clinics that were still waiting for specialised midwives to be trained. Because of the difficulties caused by having 83 different languages spoken within Ethiopia, midwives were chosen from the region in which they would be deployed to in the future. The hospital trains many doctors from all around the world in the fistula repair techniques developed by the Hamlin’s and the matron offered for Occy to return in some years and be trained so he could do voluntary work in the outlying hospitals where they were short-staffed. We agreed this would be a splendid idea. 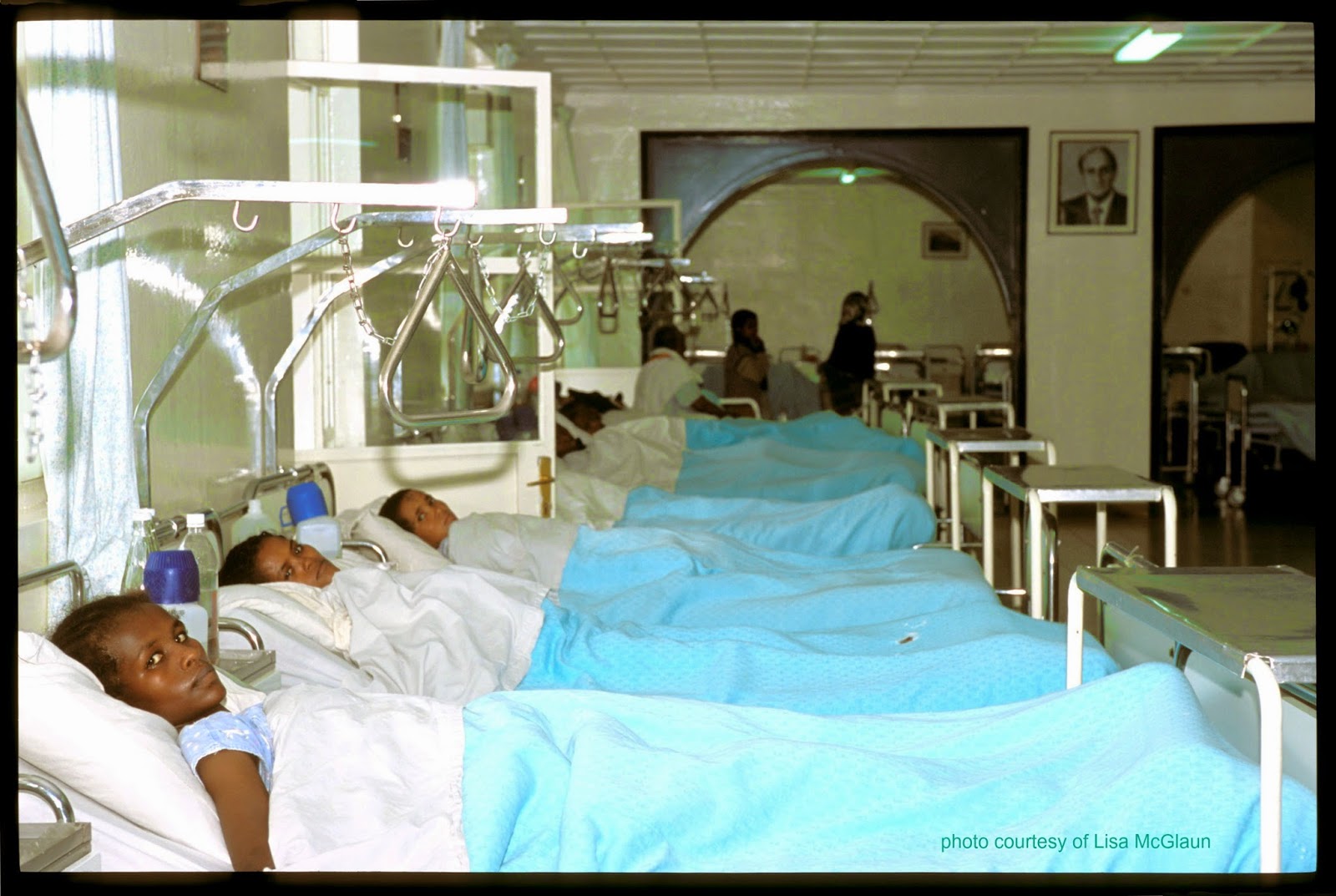 Matron took us on a tour of the surgical ward where 4 surgeries can be performed simultaneously in an open operating theatre. The recovery ward was full of women recovering from their surgeries. The hospital had relied heavily on funding from AusAid but with the new Abbott government,  AusAid had been disbanded and funding to the hospital downsized. I would really urge you to help the women of the Fistula Hospital by heading directly to the hospitals official donation page where you can also purchase gifts, many of them made by the women themselves, the proceeds going to fund the hospitals surgical, rehabilitation, midwifery and maternity programmes.