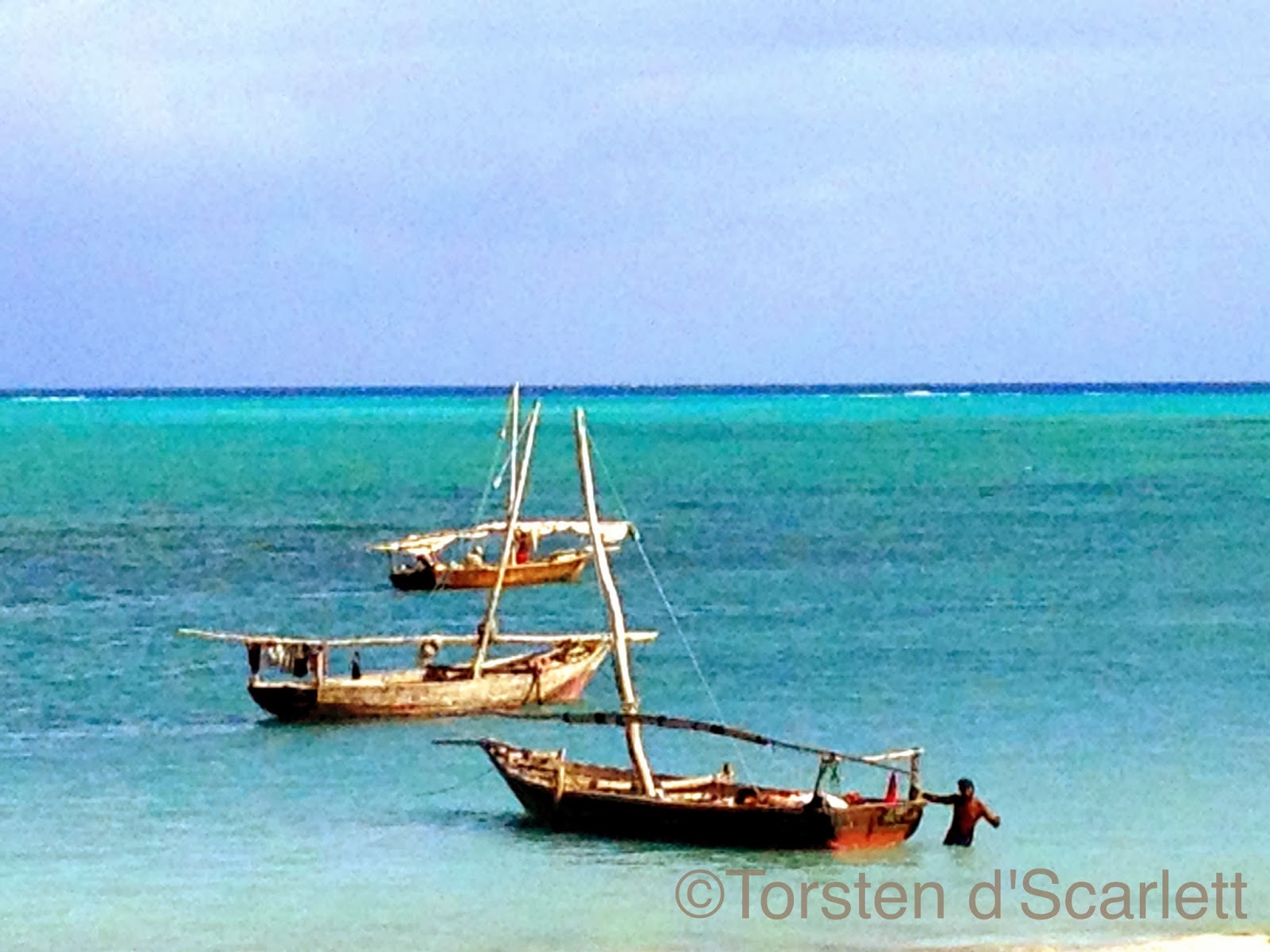 For this post the thought occurred to me that I might try something different - I am retyping exactly what I wrote in my travel journal, so here goes:-

Saturday 14/12/13
In which we leave Ethiopia for the island paradise of Zanzibar.
It is freezing cold as we exit the lobby of our hotel to catch our ride to the airport. We have so much luggage. I am seriously worried how we are going to manage camping in 2 man tents with it. We were supposed to be travelling lite this time and we have hardly any clothes so it's a mystery yet to be revealed as to what all these 'essential' camping items are that we have and apparently can't live without.
At the airport we have to remove our hiking boots for the security xray which we haven't had to do anywhere else. Frickin' laces! We check in to Ethiopian Airlines and are given 6 seats completely not together even though we are early.
The sub-adults find Ethiopia badges to sew onto their rucksacks. Finally the flight boards late and they have managed to rearrange our seats so we are at least seated in 2's.  We are served a delicious hot meal of spiced rice and chicken Ethiopian style. I have a Carlsberg beer which, even though it's traitorous as a Dane to say so, is nowhere near as good as the Ethiopian Bedele or Meta!
Flight 815 was supposed to stop at Kilimanjaro airport but they have managed to make that flight disappear altogether and have put us on flight 805 via Dar Es Salaam instead. For the hour stop in Dar we are not allowed off the plane and there are only a dozen of us continuing on to Zanzibar - strange as it is, no one else boards the plane, so why we had to stop in Dar at all is a mystery. I suspect the pilot of getting off for a quick shag. The plane takes off with suspiciously renewed vigour and Nek Minnut we are landing - a 15 minute flight lands us into a wall of heat - I feel like fainting it's so hot. Definitely should have flown in bikinis.
We walk the tarmac to the immigration shed (how quaint, a shed!) and fill out visa forms. It's the first time I've been asked nationality at birth (which was German) as well as current nationality (which is Danish) in all my years of travel. For US$50 we get our visas and proceed through to collect our luggage and change money (one of the few places in the world where it's actually cheaper to exchange money at the airport Bureau de Change!)
A friendly Masai man greets us and transports us an hour to the northern most tip of the island, Nungwi, where we have booked 3 double rooms at the moderate rate Smiles Beach Resort ($90 per night - though the term 'resort' might be stretching it a bit far) 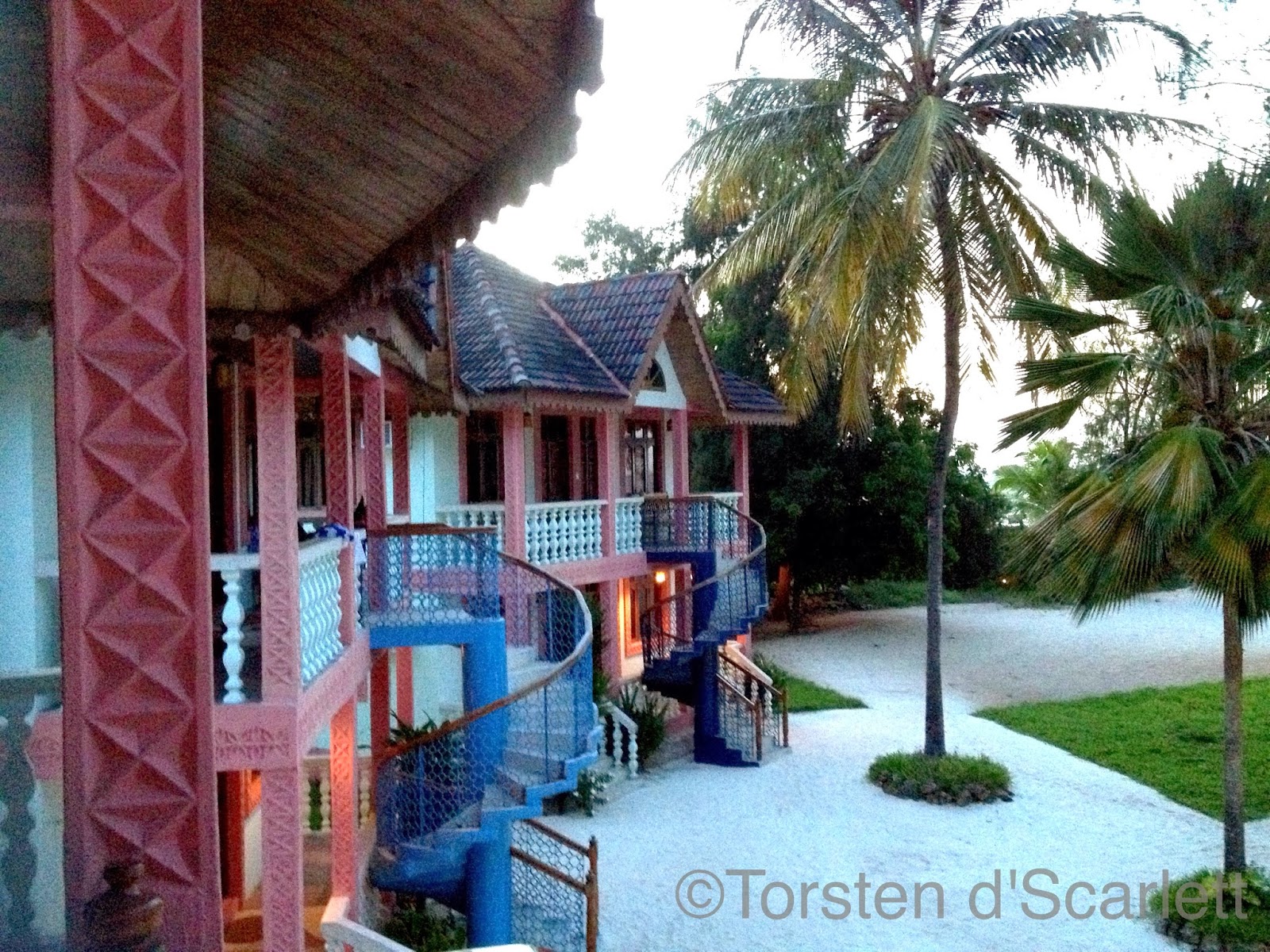 It's 4 little double storey houses with 4 rooms in each, arranged in a semi-circle facing the beach. Thatch covered beach huts shade lounges and the houses sit in sand running all the way to the shore. It's perfect! Palm trees sway in the breeze, the water is an iridescent blue with a tide that varies hugely. At low tide the coral reef is completely exposed, numerous native dhows list on their sides and locals comb it picking edibles and shells from it.


We dump our luggage and tear off for a swim in the warm water.
Later we wander down the beach to a local bar and have a wonderful but expensive meal - 15,000 shillings (US$10) for a meal - though we were slightly appeased by the free vodka shots, even if they were served in some sickly sweet strawberry syrup. Tomorrow we are definitely finding out where the locals eat! (And THAT is a tale of woeful toilet experiences to add to the 'worst toilets in the world' list)
Posted by Unknown at 12:23