Homage to my dad - memories from my childhood - happy 70th dad! 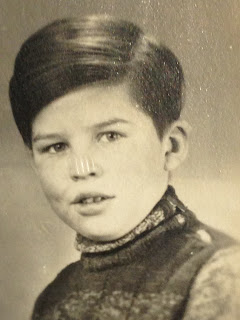 Some lessons about the new country were learnt the hard way, like when we took a trip up to ‘the snow’ on Mt Bulla. My dad thought he knew all about snow being from Europe and thought ‘No worries mate, I’ve got this!’ He didn’t account for the fact that the snow in Australia is not soft and powdery like it is in Europe but hard and hence slippery. The old Holden soon slid off the road into a ditch that required my dad to get out and push it out of the ditch. As he strained to push the Holden out of the ditch, a ominous loud ripping noise issued from the region of his 'arse' -yep, he'd split his trousers!
We had a Swedish friend Peder Kristensen who had married an Australian girl, Judith. One Christmas when Peder’s parents were out visiting from Sweden, we had them up to stay at Flowerdale so they could experience the ‘real Australian bush’. My mum had bought a smoked leg of ham and hung it from the ceiling, mistakenly thinking that because it was smoked the flies wouldn’t get to it. When she went in to prepare the dinner the ham was crawling with maggots. Not having anything else to give the guests she scraped off the maggots and then proceeded to boil the hell out of the ham – yep, everyone ate the ham, blissfully unaware! The following day we took the Swedes to the local pub and my dad, recently returned from a work trip to America, said to the barman, ‘We’ll have 6 Rusty Nails please’. The barman looked at him like he was joking, saw that he wasn’t and replied, ‘Okay mate, I’ll just have to go get them from the shed out the back.’ My dad had to hastily explain that a ‘Rusty Nail’ was a cocktail of Scotch and Drambuie over ice with a twist of lemon. After a pub lunch accompanied by numerous Rusty Nails,  Peder’s mother was poured back into the Holden for the drive home, singing praises about the marvellous Australian pubs, the marvellous Australian bush, the marvellous anything else she could think of. My dad in fact, enjoyed being a sneaky little drinks saboteur! He had a secret recipe for punch which involved soaking the fruit for several DAYS in brandy or vodka, before topping it up with the rest of the mixers. All the ladies at parties would go for the fruit in the punch thinking that was the harmless part and end up terribly sloshed! We had a mad Egyptian friend Kemi, who brought two girls up to Flowerdale for a visit. After a few ‘harmless drinks’ to stave off the cold winter he started the drive back to Melbourne with his two ladies. Noting that something seemed to be rattling under the car, he stopped the car and in the freezing cold got out to take a look. He slid under the car and about an hour later the girls were like ‘What’s happened to Kemi?’  They got out taking a look and there he was, the poor guy had fallen fast asleep under the car!
At this time in Melbourne my dad also indulged in his love for German Sheppards. We had a female called Tanja whom dad used to show. He mated her and we ended up keeping the youngest pup, Wolfy.
In our backyard my parents along with all the other migrant Italian, Greek, Australian and Yugoslav neighbours kept ducks and a white chicken. One day the black chicken, belonging to our neighbours over the back fence, decided it would prefer to come and live with us and hopped over the fence. That black chicken knew exactly how long the chain was that Tanja was leashed to and it would strut around just out of reach, winding the dog up constantly. One night Tanja managed to escape her leash whilst we all slept on blissfully unaware of the drama unfolding in the backyard. That black chicken had strutted its last tease and the dog had its day. By the time we awoke the next morning the entire backyard was covered in black feathers and one solitary chicken leg with foot was left sticking up out of the ground. The way to cope with this sort of brutality in 70’s was to sequester oneself in the living room with the sliding doors shut and smoke a joint, which my parents duly did. Tanja was in the hallway outside the living. As the living room filled with smoke it also began to seep under the gap in the sliding doors and Tanja in true sniffer dog style wasted no time in sniffing out this most unusual smell. By the time my parents emerged from the living the dog was walking up and down the hallway on her back!

In the mid-seventies my dad was seconded to set a new ‘microfiche’ company in sunny Western Australia. As he left Kodak and cold Melbourne behind his colleagues presented him with this cartoon which showed the awe he inspired with his computer knowledge. (The cartoon shows 3 men in a computer lab where the size of the computer engulfs the entire room and one of them is saying, ‘You mean it’s going to take two of these things just to replace Kosewähr?’) 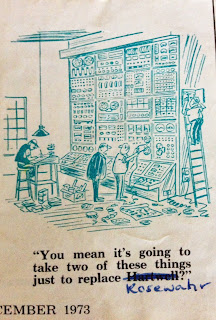 This meant seaside living and of course more boats – this time real ones. The first boat was a stinkboat (petrol powered) and it took dad a few goes of running past the fuelling dock before he worked out he had to go against the current not with the current to avoid over shooting the dock. The same boat sprung a leak from the head (toilet) on the way back from Rotto (Rottonest Island) one day and mum and I had to bail like crazy to void sinking in the middle of the ocean. The next ill-fated boat was an old fishing boat and the day after my dad bought it he got a call from the police, ‘I’m ringing to inform you your boat’s just sunk on its mooring in the Swan River’. Then came another yacht and this time whilst my dad was busy playing captains at the wheel with his captains hat on and pipe smoking, he neglected to notice that the mast WAS NOT going to fit under the Canning bridge – oops! When they finally made it out into the ocean on this one my mum, who was fishing, proceeded to haul in a huge blowie (blowfish or puffer fish), landing it much to my dad’s horror in the middle of the cockpit at his feet. According to my mum, Nek Minnit he was half way up the mast.
Taking a break from yachting, once I had finished university my parents decided to pack up and spend a year overlanding it back to Europe.
My mum had never seen my dad, who is renowned for his patience and sense of equality and justice, hopping mad before, but by the time they reached the Indian city of Lucknow, she could actually say she had witnessed this rare phenomenon. It happened at the Lucknow railway station. They had stood in some semblance of a line for several hours, surrounded by a heaving mass of humanity. Finally it was their turn to approach the ticket counter. As people tried to crawl under my dad’s arms, around him and in between his legs in order to reach the ticket counter ahead of him, my dad was having none of it and as forced his way onward to the ticket counter. The ticket master wobbled his head and said, ‘I am very sorry sir, there are no more tickets available!’ It was at that precise moment that my dad flew into a rage, throwing his bags on the ground, shouting and stomping his feet. This brought a bevy of concerned station officials who escorted the irate foreigner into their offices, offered him tea whilst telling him to ‘Please calm yourself sir!’ and informed that if he wanted tickets all he had to do was slip someone some baksheesh and no problems!


In Germany where my dad landed a plum job, they were visited by Australian friends Ted & Betty. One night dad 'cooked' his favourite dinner for them. Everyone really enjoyed Mikes steak tartare, that is until Betty asked for the recipe, discovered the meat was raw and promptly went to the toilet and vomited the whole lot up again! After three years of living in Germany getting paid lots for a job that my dad declared he was never quite certain what it was he was being to do, my parents decided to move back to land of Oz and further yachting adventures, the most infamous of which was reserved for dad’s last yacht, appropriately named ‘Delinquent’.
Mum and dad had set of for a few weeks of sailing on a Monday and told me they were heading north for Jurien Bay and would call when they got to port to let me know they’d arrived safely. By the Saturday there had been no phone call, so I figured that seeing as 5 days had passed, it wasn’t unreasonable to be a bit worried and called the police. They promptly initiated a sea search & rescue AND informed the papers – the headlines read ‘Missing Perth Yacht Riddle’ and it was all over the TV and radio. The next day the headlines read – ‘Couple under Fire as ‘Lost’ Yacht Turns Up’. They had set sail northward bound but the winds where playing havoc and not cooperating so my mum and dad decided they would just sail over to Rotto instead (a few hours’ sail west of Perth). They’d been happily moored in one of the bays when they heard on the Sunday morning radio that they were ‘missing, with fears for their safety’. Dad dutifully rowed ashore and with his usual tongue-in-cheek, said to the coast guard, 'My good man, I am here to inform that we are not lost! We know exactly where we are and we have been here all week. You may call the search and rescue off now!' 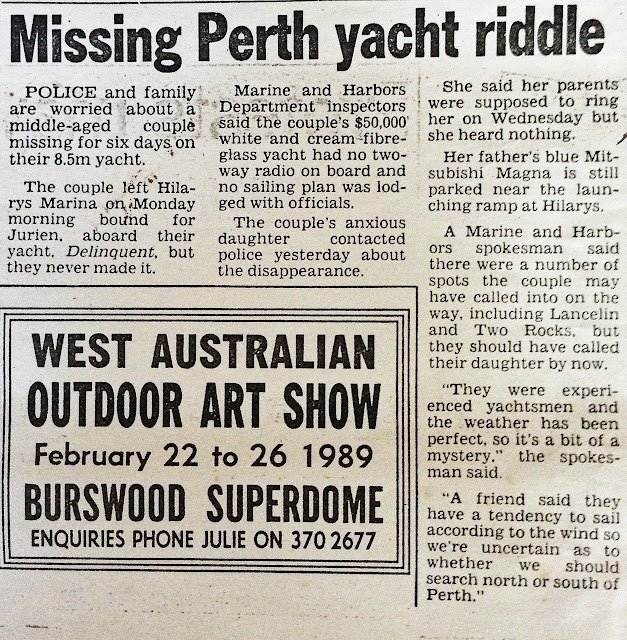 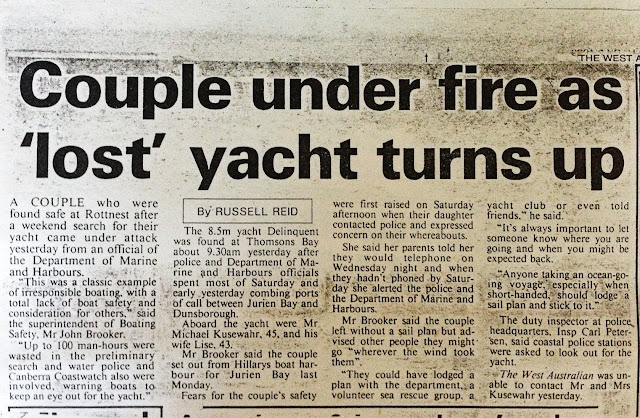 Not long after this, my parents separated and I acquired a new brother & sister and stepmother.(See my post 'How to get a sister & brother in 10 easy steps) Poor old Delinquent was sold and swapped for a farmlet in the middle of Woop Woop – Popanyinning. Every Australian knows that there’s a universal place called ‘Woop Woop’ located in the middle of nowhere and now my dad had moved there! Strike-a-light Mike – what was my dad thinking? He now had 5 sheep all with pet names who had to be ‘shorn and weathered’, he owned R.M. Williams moleskins, oilskins and boots, cut firewood with a chainsaw for the barbie (BBQ) and road around on a ride-on-mower cutting the firebreaks. Two decades on he still resides in Woop Woop, has just retired from working for the ‘Germans’ (a German company called Inotec who manufacture the world’s best and largest capacity scanners – and who, by the way, love visiting dad in Woop Woop to see the kangaroos and play a round of golf at nearest golf course with its dry bush setting and sand greens – not a skerrick of green in sight) and I hope he can now get on with amusing us with interesting tales of his life and times at his blog popomike.blogspot.com and writing that novel! Love you dad, life sure has been entertaining with you! xxx