Octopus and How to Cook Fern Shoots 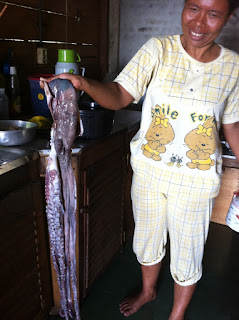 Diary extract from January 2012 Kiria is a village girl whom Faridah employs to help out with the food preparation and cleaning. One afternoon she pointed to a large basin on the kitchen floor and said 'mangsi'. I peered in at a slimy grey, pink and white mass of tentacles and suckers - it was one rather large octopus destined for dinner. Kira held it up by the head above her shoulders and let the dangle almost to floor to show me how big it was. 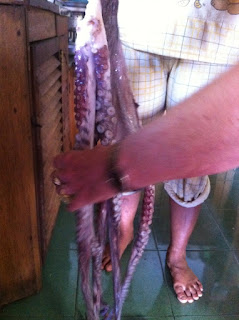 She then washed all the sand out of it thoroughly and proceeded to chop the tentacles into small pieces.  These were then fried in a tomatoey sambal that was delicious, served with rice and chopped cucumbers. 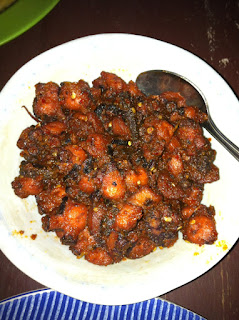 Staying for several weeks in Air Dingin necessitates registering with the local police rather like we had to do in the old East Germany when I would travel there with my parents to visit my aunt who lived just outside of East Berlin. 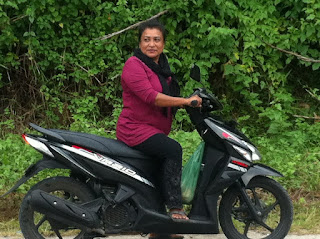 Faridah took me on the back of her motorbike into the nearest 'big town' Tapak Tuan', a fifteen minute ride away, to visit our police friend, Isnadih, and present copies of our passports along with passport photos of each of us for their records. Isnadih had called ahead and warned Faridah that we needed three photos each, not the usual two due to the fact that a person in the north of Aceh had been shot and Aceh had now been declared a state of unrest and emergency requiring extreme precaution! After we finished at the police office we went to visit the family running the café Faridah had built 3kms from the house. 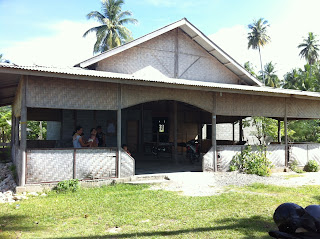 It is situated on the beach adjacent to a new Harbour being built where they plan to bring in fish to transport on for the Medan market.

Next we went into the pasar, or market in Tapak Tuan to shop for fruit and vegetables. There were many things I was unfamiliar with, particularly the different types of leaves that can be stir-fried in a similar way to my favourite kankung.

I did recognize the delicious fern shoots though because we can also by them at Rusty's market in Cairns. Later on I watched Faridah cooking them and I attach the recipe below. Everybody wanted to chat and have their photo taken. Luckily my Bahasa Indonesian is improving enough to hold a simple conversation. Of course if they speak the Acehnese it's completely impossible to make out even one word. I had commented to my mother that it sounded like Cambodian and she affirmed that the Acehnese had indeed come in several migratory waves down from Cambodia.

Across the road from the market we walked passed a couple of head butting goats to visit our friend Am who has a small clothing stall.

Faridah couldn't resist a peach coloured pant and top outfit with a peterpan collar and I snaffled up transparent red (surprise, surprise I know) slendang or scarf, whilst sitting on low stools chatting with Am and her new husband, who looked to be about half her age. Faridah is also engaged to someone 19 years her junior - its considered perfectly normal here to marry a much younger man. Faridahs fiancé is not from Aceh so he doesn't speak Acehnese. He is in fact from further down south and a muslim Batak. They have to speak Bahasa Indonesian together. They met by mobile phone when Faridah dialed the wrong number and got him and they got to chatting. He has been up to visit for a few days and he stayed in the house. The village chief had to be notified because they have rather strict muslim laws about single men staying with single women.  In fact one of the village chiefs was himself caught visiting a divorcee and they were made to sit all day in just their underpants in the river for everyone to see as punishment.
How To Cook Delicious Fern Shoots
Place a small piece of fresh galangal, ginger, garlic and chili into a blender and mash to a paste with some salt. Wash a nd chop the fern shoots into 1" pieces and place into a hot wok with some coconut oil. Pour the paste ontop. Add a couple of bases of lemon grass and stir round for a while. Mix in a cup of santan (preferably freshly shredded (coconut) and add some water to make a small amount of sauce. Cook for a while longer until you're sure the shoots are tender and serve - yum!
Posted by Unknown at 16:13