My sofa, car & laptop are all Red - what is the Secret meaning of this? Have I encoded a hidden or secret meaning by purposely choosing red for certain of my posessions? Read on to find out: I have been totally in love with Chaos Theory since reading James Gleicks book ‘Chaos’  13 years ago. I even managed to find an excuse to insert Chaos Theory into my final dissertation at Uni on Wayfinding for Vision Impaired Persons. Chaos theory is about looking at dynamic systems that are highly sensitive to initial conditions (Think Butterfly Effect – a term appropriated from the title of a paper given by Edward Lorenz in 1972 to the American Association for the Advancement of Science in Washington D.C. ‘Predictability: Does the Flap of a Butterfly’s Wings in Brazil set off a Tornado in Texas?’) 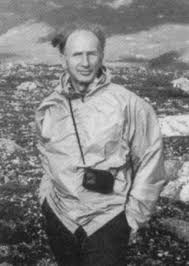 Lorenz was an American mathematician and meteorologist and this is his story of revelation in James Gleicks words:
One day in the winter of 1961, wanting to examine one sequence at greater length, Lorenz took a shortcut. Instead of starting the whole run over, he started midway through. To give the machine its initial conditions, he typed the numbers straight from the earlier printout. Then he walked down the hall to get away from the noise and drink a cup of coffee. When he returned an hour later, he saw something unexpected, something that planted a seed for a new science. This new run should have exactly duplicated the old. Lorenz had copied the numbers into the machine himself. The program had not changed. Yet as he stared at the new printout, Lorenz saw his weather diverging so rapidly from the pattern of the last run that, within just a few months, all resemblance had disappeared. He looked at one set of numbers, then back at the other. He might as well have chosen two random weathers out of a hat. His first thought was that another vacuum tube had gone bad.
Suddenly he realized the truth. There had been no malfunction. The problem lay in the numbers he had typed. In the computer’s memory, six decimal places were stored: .506127. On the printout to save space, just three appeared: .506. Lorenz had entered the shorter, rounded-off numbers, assuming that the difference-one part in a thousand-was inconsequential.
It was a reasonable assumption. If a weather satellite can read ocean-surface temperature to within one part in a thousand, its operators consider themselves lucky. Lorenz’s Royal McBee was implementing the classical program. It used a purely deterministic system of equations. Given a particular starting point, the weather would unfold exactly the same way each time. Given a slightly different starting point, the weather should unfold in a slightly different way. A small numerical error was like a small puff of wind – surely the small puffs faded or cancelled each other out before they could change important, large-scale features of the weather. Yet in Lorenz’s particular system of equations, small errors proved catastrophic.

Chaos theory can be applied to almost any aspect of life. This makes it vastly interesting, I mean really, if I start talking about two trajectories in phase space with initial separation

where λ is the Lyapunov exponent  how many of you are still interested? No, I didn’t think so, but I tell you that one of the main concepts in Chaos Theory is that fluid turbulence develops through a strange attractor (I discussed strange attractors in my post on the Higgs-Boson) to produce this fantastic picture below, suddenly it’s much more interesting. 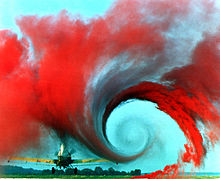 In case you didn’t get it a strange attractor is a trajectory or path that a chaotic system runs on from one situation to the next in some sort of irregular pattern without ever settling down (which is what an attractor does).
In Don DeLillo’s fiction novel White Noise,  one of my favourite fiction novels  heavily structured on Chaos Theory, (and I mean who wouldn’t love a book whose main character is a professor who has pioneered the field of Hitler Studies – hilarious!) the need to explain patterns and locate those strange attractors I mentioned earlier is littered throughout the book. Like when supermarket shelves get rearranged and the consumers wander around aimlessly trying to work out what order they’ve been put in but unable to define the new pattern.  One of my favourites, an interior design point of view, is the complete psychological frustration experienced by David Bell in trying to decode the meaning of the colour scheme of the office environment.

‘The door of Quincy’s office was orange and his sofa dark grey. Some of us in Weede’s group had doors of the same color but sofas of a different colour. Some had identical sofas but different doors. Weede himself was the only one who had a red sofa. Weede and Ted Warburton were the only ones with black doors. Warburton’s sofa was a dark green and so was Mars Tyler’s door. But Mars Tyler’s sofa was ecru, a shade lighter than Grove Palmer’s door. I had all this down on paper. On slow afternoons I used to study it, trying to find a pattern. I thought there might be subtle colour scheme designed by management and based on a man’s salary, ability and prospects for advancement or decline. Why did no two people have identical sofas and doors? Why was Ted Warburton allowed to have a black door when the only other black door belonged to Weede Denney? Why was Reeves Chubb the only one with a primrose sofa? Why was Paul Joyner’s perfectly good maroon sofa replaced by a royal blue one? Why was my sofa the same colour as Weede’s door?’

Everyone thinks Chaos Theory is about chaos but it’s actually about order – finding order in a system. Can you think of another reason why things like Numerology & Astrology are so popular? It’s almost like it’s an innate part of our genetic wiring as humans to try to find pattern & meaning in seemingly random events. Why is religion in any guise, even the religion of anti-religion, so popular – because it produces order from the otherwise random set of events that constitute our lives. Next time you’re trying to work out a fool-proof way of predicting the stockmarket think Chaos Theory and remember everyone tries to assign a meaning to the pattern in the ink blot. Oh, and by the way, my sofa, car & laptop are all red because they are my snakeskin jacket -  'And for me it's a symbol of my individuality, and my belief... in personal freedom.' (-Sailor in the movie: 'Wild at Heart')
‘Chaos Theory is a new theory invented by scientists panicked by the thought that the public were beginning to understand the old ones.”
- Mike Barfield
Posted by Unknown at 01:00