'No,no, your not thinking; you're just being logical.' - Niels Bohr
Isn't it weird how events seem to conspire in a dance of synchronicity in the space-time continuum? Ever since R tutored me in Physics at Uni I've been fascinated with Quantum Mechanics, Superstring theory and Chaos theory. So there I was, driving the twins to school, wishing my car was capable of WARP speed because as usual, we were running late. It was the fourth of July, the day The Adventures of Alice in Wonderland were first published in 1865 and coincidentally they were playing White Rabbit from the movie Sucker Punch on the radio. The news came on with the astonishing announcement that CERN had confirmed the existence of the Higgs-Boson particle! 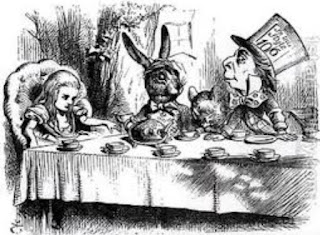 This was fantastic news, I almost had a car crash in my excitement, definitely worth a Mad Hatters afternoon tea party, because it means we are that much closer to proving M-Theory, the 'Mother of all Theories' that explains everything in terms of Superstring theory plus 1 - it's kind of like it brought a friend to the party. (String theory consists of the four dimensions we are already familiar with, time being one of them, and another 6 dimensions made up of tiny string like particles each with their own unique vibratory patterns) Unlike Bosonic Theory where there has to be 26 dimensions in order for the quantum mechanics (calculations) to make sense, Superstring theory works with a mere 10 dimensions, and if it brings it's plus 1 along, which can be described as one of these string particles stretched really, really long into a two dimensional membrane called a 'brane' we have M-theory. Now we have 9 dimensions in space (6 of which are circular) one dimension of time and one dimension of 'brane'. The six circular dimensions have a slightly different set of physical laws to those we are familiar with and if you really want to get extreme you can visualise a world where you are aware of these other dimensions in Remedios Varo's painting 'The Alchemist', where we inhabit a 'down the rabbit-hole' existence.
The existence of the super long strings or branes is kind of like a giant, two dimensional flying carpet affected by massless  open-ended strings of gravitons (and in fact our universe is thought to be floating on one of these branes with gravity leaking to us from a parallel universe or brane) and the gateway to these can be theoretically explained and accessed through Black Holes, or wormholes (ie when we work out how, we'll be able to move between these parallel universes via a Black Hole). Scientists now think that two of these parallel universes, or giant flying carpet 'branes' colliding were what caused the original Big Bang. Now don't get the idea that I actually know what I'm talking about when it comes to the mathematics of Black Holes, for that I would need to enlist my mathematics wiz friend Samantha Fifield(see, she even has her own field though I'm not sure what her theory for for Fi is ;-)and if you're lost altogether, remember Niels Bohr famously said 'If anybody says he can think about quantum physics without getting giddy, it only shows he hasn't understood the first thing about it'.
Back to the Higgs-Boson, a boson is a particle of force and Peter Higgs is a physicist at the Edinburgh University and he first postulated the 'Higgs Field' back in 1964, as a field or force that permeated everything in the universe, and when particles try to move through it their interactions cause them to appear to have mass (is it all just a figment of our imagination?). This then slows the particles down and and allows them to bind together into the familiar forms of matter (fermions) we can see. The Higgs-boson itself is a particle of vibration in the Higgs field, which can be created if enough energy is put into the field. It was  nicknamed the God-particle and used as the title by Leon Lederman's publishers (for his 1993 book 'The God Particle') who abbreviated a comment he'd made in his book where he described the Higgs particle as that 'Goddamn particle' that was going to be so difficult to find because it was so small. The Higgs-boson was proven to exist in CERNs Large Hadron Collider which enables two protons to be smashed together, producing enough energy in the field to observe the Higgs-boson - this was what was announced on the 4th July 2012.
This brings me to Lynn McTaggart's brilliant book 'The Field', which discusses 'Zero Point Field' research, the state in which zero-point energy exists (even at a zero point matter amazingly still produces energy).This makes everything 'one heaving sea of energy- one vast quantum field'. This of course would mean that everything is connected to everything else like an invisible web - and think the Butterfly Effect, would therefore also mean we effect everything else because we touch or communicate with everything else on a subatomic level. This doesn't mean that we are automatically bestowed with omniscience but it does mean we can be omniaware. 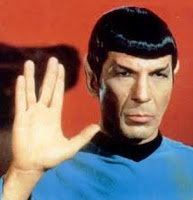 It was actually the scientist Hal Puthoff who did the first groundbreaking work using the Zero Point Field and this enabled him to develop the invisible stealth aircraft that is invisible to radar by distorting and jangling radar frequencies, hence making the aircraft undetectable by the radar.  So this is how I will be able to take the twins to school at WARP speed like the Starship Enterprise from Star Trek one day in the not too distant future, waving goodbye to them with the Vulcan V. All we need to do is work out how to decrease the retractable index of the Zero Point Field which means we can increase the speed of light to anything we please - this is very simply done by expanding the space-time continuum behind the craft and contracting it in front of the craft and wooomph! (not that we know how to do all this space-time contracting and expanding yet, but hey, those crazy-arse mad scientists are working on it and as long as they're thinking and not using to much logic it shouldn't be too long before they work it out) And what about all that energy in this supposedly endless sea of energy? Why, as Nikola Tesla postulated, we simply extract the energy from the Zero Point Field around us using, let's say, cold fusion maybe?
What I sometimes visualize when I think about the Higgs Field and Zero Point Energy now we know the Higgs-boson actually exists, is that I'm standing looking at a tree and me, the tree and everything around us is one giant sea of honey. If I lean toward or away from the tree the honey moves in ripples and the tree feels the effect of my movement in some infinitesimal way - which is actually what is really happening only without the honey -replace the honey by a sea of energy and you'll have some idea of how important this discovery is in reality. That we touch and connect with everything is no longer some hippy-shit concept and that sea of energy is an as yet untapped endless supply of free energy - no more fossil fuels!
So the point of all this? If we can merge our knowledge of the Higgs-boson with Zero Point Field energy I'll see you on Vulcan!