No visit to Ho Chi Min City, the former Saigon, would be complete without a visit to the famous Cu Chi tunnels and in my opinion for what it’s worth that is the ONLY reason to stop by HCMC. After a week in tranquil Hoi An coming to HCMC was an awful shock. Just another big modern city with more than its fair share of traffic – in fact the most traffic I’ve seen in any city so far. The greatest proportion is motorbike riders, rather surprisingly all wearing their helmets – something that would be considered merely a suggestion in most other Asian cities. The majority of riders also wear these funny cloth masks over their faces that look like half a bra, for the pollution from all the traffic.
I was rather surprised to learn that not everyone has heard of ‘the tunnels’ so here’s a brief synopsis. The tunnels are a 240km network of shallow underground tunnels surrounding HCMC and part of a more extensive tunnel system that covered most of Viet Nam. The ingenuity and sheer effort required to build such a large tunnel system is just staggering – no wonder they won the war! The tunnels were used in the Viet Nam war by the Viet Cong as operations bases supply routes, hospitals, food and weapon caches and living quarters. Life in the tunnels was pretty harsh – we were down one of the tunnel routes for about 50 meters and we couldn’t wait to get out! During the war air, food and water were scarce and the tunnels were infested with ants, poisonous centipedes, scorpions, spiders and rats. At any given time half the tunnel population was affected by malaria and intestinal parasites. The occupants would normally stay down during the day, only coming out at night to launch attacks or look after their crops. If there was a bombing raid or troop movement above (often the Americans were marching right over the top of these tunnels without being aware of them) the people in the tunnel would be stuck in the tunnels for days at a time.
The entrance from a tunnel was just a square wooden lid, just wide enough for a person’s shoulders to fit thru, in the jungle floor covered in leaf litter and completely indistinguishable from the surrounding ground. The first level of the tunnel was crouching height and person width – I managed to walk along easiest when I bet double and hung my arms down in front of me like an ape ;-) Eventually you come to a room that is stepped down and may be used as a meeting area, sleeping chamber or kitchen.

The kitchens used a rather ingenious venting system to dispel the cooking smoke up to 500 metres away. First the smoke would pass into a nearby chamber. When that was full it would pass into another chamber then another eventually venting out thru tiny holes in a natural termite mound so as to be virtually undetectable. 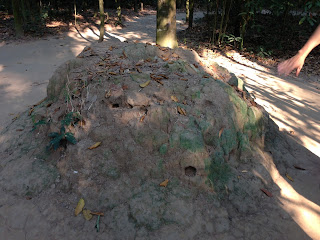 There were also several more levels of tunnels each getting shallower until the lowest level which was only passable by wriggling thru. They couldn’t build the tunnels any lower than the water table and the tunnels would have an escape exit into the Saigon River – under water so that the exit was not visible by passing enemy boats.


Interestingly it was an Australian specialist engineering troop, 3 Field Troop, under the command of Captain Sandy MacGregor that was the first to really venture into and search the tunnels for four days, finding ammunition, radio equipment, medical supplies, food and signs of Viet Cong presence. The Americans had been unsuccessful in penetrating the booby trapped tunnels and were told to gas the entrances, throw down hand grenades and ‘crimp’ the entrance so that it couldn’t be used anymore. The Aussies with their successful penetration were able to reveal the immense military significance of the tunnels. At an International Press Conference in Saigon shortly after this revelation, MacGregor referred to his men as Tunnel Ferrets. An American journalist, having never heard of ferrets, used the term Tunnel Rats and it stuck. Following his troop's discoveries in Cu Chi, Sandy MacGregor was awarded a Military Cross.

Of course at the end of our tunnel tour we got to fire off an original weapon of choice - this is R hammering the target. Mine was a round of ten single shots from an AK47 accompanied by squeals between each shot.