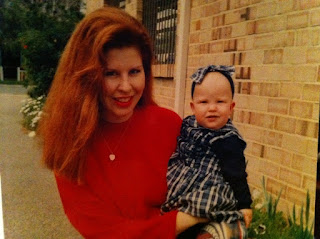 This story is about the consequences of making choices based on predetermined wish fulfillment. As you may have heard me mention in a previous blog, Russell was in fourth year med school and I was in second year interior architecture when first daughter arrived. This was the consequence of a sleepless night spent in a creaky old hotel run by three creepy spinster sisters in Bega (see Crazy Cyclists). 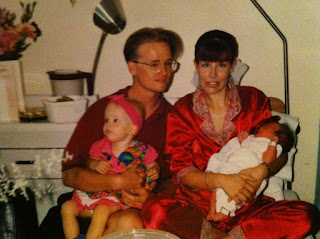 When R was in his final (6th)year and I was in my fourth year second daughter arrived (luckily not in the orangutan reservation in Borneo, but that's another story). R's fellow med students couldn't believe it. 'Did you miss the family planning lecture Russell?' they asked. My uni studies became more and more part time with all the unexpected arrivals, but as I had with first daughter, I took second daughter to uni with me quite happily breastfed her in one arm whilst trying to work on the computer or draw with the other arm.
I had a new unit and tutor - a thirty something male - in perspective drawing. In the first class we were doing a drawing activity when second daughter started crying. I picked her up, popped out a boob and proceeded to breastfeed her whilst simultaneously endeavouring to stabilise the paper, ruler and manipulate the draughting pen. Suddenly Mr Tutor disappeared for approximately 15 minutes. When he returned he had a beet red face so naturally we wondered what was up with him.
After class the head of department invited me into her office.
'You've really shocked the new drawing tutor' she said with a smile on her face, 'He came in blustering and spluttering'.
Apparently he'd stormed into her office and demanded she do something 'about the, the, the, well! There's a woman in my class and, and, and well, she's breastfeeding!'
My H.D. had looked at him calmly and casually inquired, 'And?'
'Well!' he exclaimed, 'Aren't you going to do something about it?'
'Hmm,' she considered, 'Well, I don't think I can breastfeed the baby, what about you?'
He stormed out of her office and never raised the matter again.
My HD told me she thought I was an excellent role model and inspiration for younger girls who thought a career and study ended with motherhood. 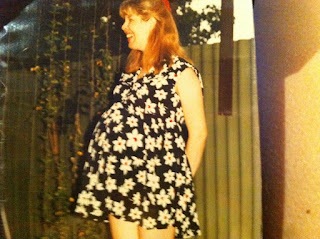 Two years later I was feeling quite ill and took myself off to the doctor. A pee and a dip of the stick in the jar later he exclaimed, 'By god, you're pregnant!'
What!!!I rand R at work.
'We're pregnant!'
'What??? How???' he said shocked.
'Well the usual way I guess' I replied.
In a dilemma we conferred over what to do - could we cope with another child. We joked that we would only keep it if it was twins. We also told all of our friends this. A short while later R had to go to Dunedin in New Zealand on a training course for a month. We would regularly post Anne Geddes card to each other of twins and I showed these to our friends. As I got enormous he took it upon himself to sew me two new dresses (see above photo) only thing is he didn't allow for the 'bump' so they were rather short at the front! 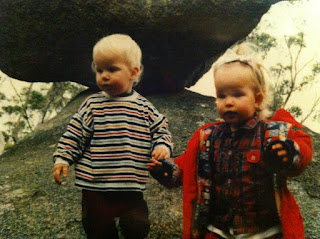 As soon as he came back it was time for the 12 week ultrasound. 'Well, here's where we find out if we're having twins" we joked with each other. The doctor brought up the ultrasound image on her screen and the began shifting from foot to foot.
'Umm, is this your first pregnancy?' she asked.
'No, third.'
'Umm, I'm not sure how to say this but you're having twins' she announced.
R had already seen the screen and was looking disbelievingly at it. 'Oh my god! We really are having twins!' is all we could say for the next hour while we drove to pick up first daughter from her Montessori school. Waiting outside her classroom we told some of our friends who were there and showed them the ultrasound. They couldn't believe it.
'Nooo!' they said, 'Who does that? Wishes for twins and then gets them!'
Well, I guess we do! Then there were four! 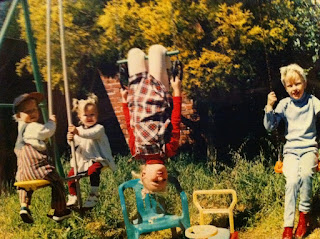